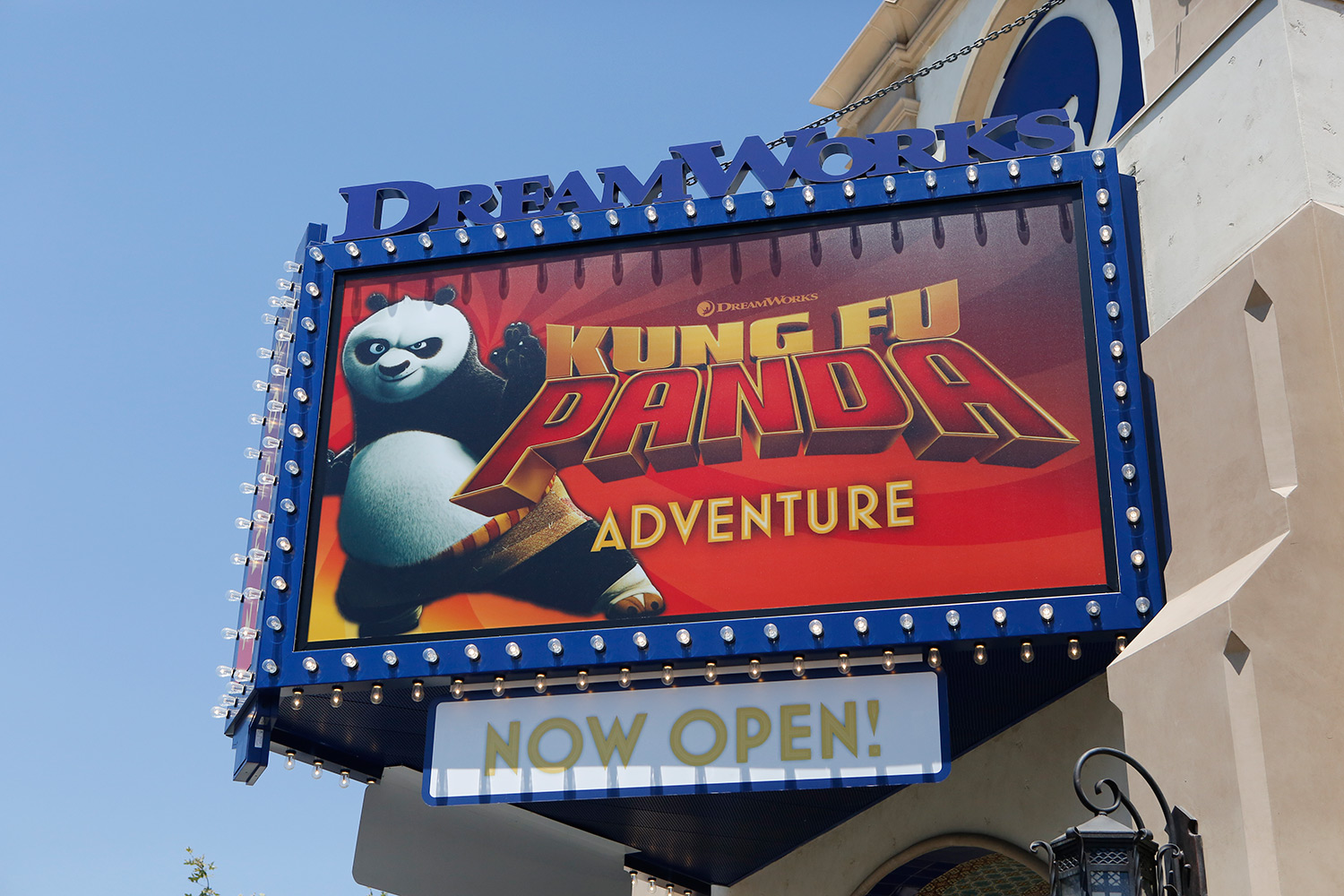 When Chairman of NBCUniversal, Stephen Burke said that he wanted something new to open in the park every year, he seemed to have really meant it. With the Fast & Furious: Supercharged opening in 2015, Wizarding World of Harry Potter opening in 2016, The Walking Dead Experience in 2017, and new for 2018 is the Kung Fu Panda Adventure within the brand new Dreamworks Theatre. The attraction opened earlier this summer, replacing Shrek 4D, which has been a part of the park since 2003. In todays look at Universal Studios Hollywood, we’ll be visiting the latest attraction as well as a few other highlights that have returned for the summer, including Nighttime Lights at Hogwarts Castle, and an updated Raptor Encounter featuring Blue, the Velociraptor from Jurassic World.

The Kung Fu Panda Adventure, also known as Kung Fu Panda: The Emperor’s Quest, is the very first attraction you’ll encounter when you walk through Universal Studios Hollywood. The theater, meant to invoke a sense of Hollywood past, was built so that the attraction within can be rotated out when need be, without the need to change the exterior. It’s a move that really works within the entrance of the park, and a smart move now that Dreamworks Animation is a part of the same company.

You’ll find Pinocchio manning the ticket booth at the entrance. But don’t worry, no tickets are required, unless you have an Express Pass (Universal’s front of the line ticket).  As you enter the courtyard, you’ll see movie posters from DreamWorks Animation past and present, many you forgot about. The theater butts up against the backside of Hogsmeade, but it’s a much better transition than Shrek used to be.

As with most attractions these days, there’s a pre-show before the main attraction. Guests file into a main lobby wherever they please. There’s Emmy’s and Annie Awards to look at, and a few items from the Kung Fu Panda lore that will come into play during the Emperor’s Quest.

One would think the pre-show will entirely be made up of Kung Fu Panda but they really embraced the “Dreamworks Theatre” aspect of it and used a lot of familiar characters like Shrek, Penguins of Madagascar, and Trolls.

Not going to spoil too much of the attraction but it is a interactive motion-based screen attraction, but the greatest thing is that they’ve done away with the 3D! All can sit back and enjoy the adventure, following Po on his Emperor’s Quest.  The screen does get pretty wide so I would suggest sitting back a few rows.

In short, Kung Fu Panda Adventure is fun and enjoyable… although I think the seats do a lot more shaking than I would prefer. I’m just trying to enjoy the flick! The quality of the animation and effects are superb, but it is a lot to look at. Here’s an instance where maybe 3D would benefit on where your eyes should focus.

There’s no exit into the gift shop here, but the new store featuring Dreamworks Animation, Illumination Animation, and Hello Kitty merchandise is right next door.

MEET BLUE AT THE RAPTOR ENCOUNTER

The Velociraptor named Blue is one of the few dinosaurs with a name in Jurassic World: Fallen Kingdom, and now you can meet her for yourself at the Raptor Encounter on the lower lot.  The designers did a really great job on the design, but I still wish they found a way to make her a touch smaller. Either way, be sure to say hi to Blue when you ride Jurassic Park: The Ride for the last time!

The Latest in the Wizarding World

The news of Butterbeer Ice Cream finally hitting Hollywood is true. All of it. But while we still don’t have an actual Florean Fortescue soft serve location, hard packed ice cream is served in the carts as well as within Three Broomsticks. If you’re wondering how it tastes, it’s a bit like vanilla with fudge… but hints of butterscotch in the aftertaste. Rather subtle to me.

For a limited time this summer, you can catch Nighttime Lights at Hogwarts Castle as it returns to light up the sky. This time, with an added bonus of a fireworks finale, which hasn’t been done since the grand opening in 2016. It isn’t the full fireworks show but it’s enough to dazzle guests who stick around well into the evening.

The Nighttime Lights at Hogwarts Castle runs through August 19 and then September 1- 3, 2018.

What’s next from Universal Studios? 2019 will bring the new Jurassic World ride replacing Jurassic Park The Ride. But sooner than that will be VIVO Italian Kitchen, a new dining experience at Universal CityWalk opening soon.

And that’s it from Universal Studios Hollywood! We’ll see you in the park!

David Yeh
A long time fan of both Disney and Star Wars, he has a hard time resisting the temptations of Disney’s merchandising force. If you see pictures of the toys and pins, you can bet they are from Dave, our resident collecting guru.
Read more from David Yeh
Tags: dreamworks animation, dreamworks theatre, wizarding world, Universal Studios Hollywood, Harry Potter, Kung Fu Panda, Universal Studios
Loading Comments...