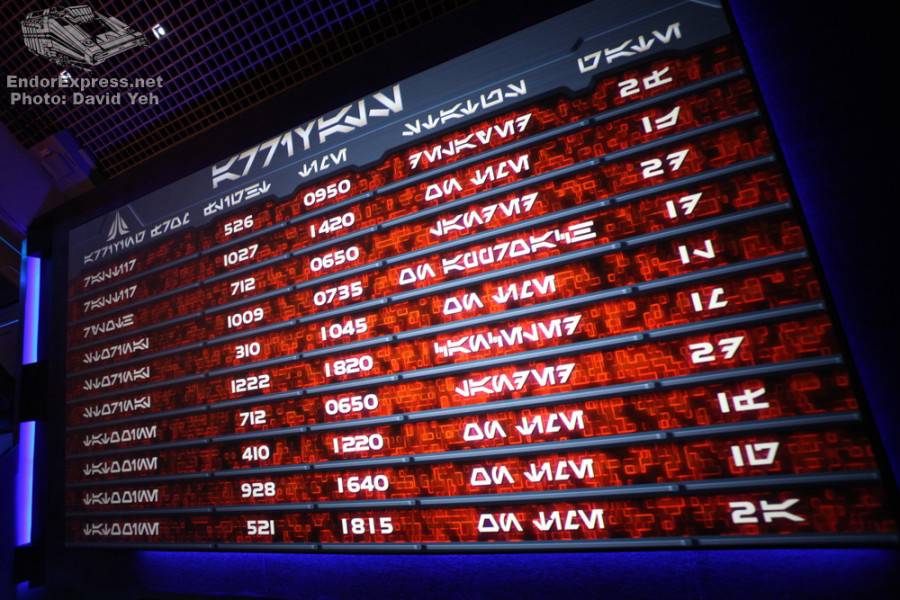 I remember the first time I picked up a Star Wars Role-Playing Game sourcebook from West End Games that contained an ‘Aurebesh’ chart, back in the late 80’s/early 90’s. My initial two thoughts were, “Wow! That’s pretty cool!” and “Wow! Someone has too much time on their hands!”  I specifically recall a pretty cool graphic for a tabletop gaming diorama featuring an Aurebesh-graffitied MPC model kit of the AT-AT, but told myself that was about the only application for which the Aurebesh would ever be useful.

Shows what I know!

Around the time of the prequels, suddenly the Aurebesh was everywhere. In Phantom Menace, the filmmakers used the old RPG characters for a screen translating Artoo’s droidspeak into Basic, and this ‘official use’ lit the fan community afire. After Revenge of the Sith came out I purchased an action figure multi-pack which contained a Senate Pod, and was charmed to discover that Hasbro had hidden a message in Aurebesh on the sticker for the computer screen. I deciphered it as “SW FANS RULE”, and quickly reported this inside joke to my fellow collectors.

While looking for Aurebesh fonts online, I stumbled across an editorial by ErikStormtrooper, entitled “What does that screen say?” [ http://erikstormtrooper.com/ed_galbasic1.htm ] I found inspiration in Erik’s diligence at trying to decode a screen of text seen in Return of the Jedi, even though ultimately the screen was revealed to be nothing more than repeated blocks of ‘mood gibberish’ as Erik termed it.

Subconsciously influenced by this, in 2007, I zoomed my videocamera in on tiny stickers on the old blue-and-white StarSpeeder 3000 in the queue in Orlando. It wasn’t Aurebesh, the classic ride had come too early for that development. But although the characters were our plain old alphabet, the words were tantalizingly foreign. Back home, I spent an evening freezing the tape and copying down what I saw… but all it turned out to be was backwards snippets of text from a book on printing. Like the screen in ROTJ, it had never been designed for close scrutiny.

The only Aurebesh of note in Orlando in 2007 was the sign outside Tatooine Traders, added in a post-Prequels refurb, and even that was arguably mis-translated. As I’ve discussed many times before, the Aurebesh contains a single glyph ‘orenth’ for the ‘oo’ sound, but the sign for Tatooine Traders uses the letter ‘osk’ (o) twice instead.

But now, for Star Tours: The Adventures Continue, the Aurebesh is everywhere! And not unlike the ‘Mara’ alphabet from Disneyland’s Indiana Jones ride, this secret code is a fun puzzle for fans to decipher while waiting in line. What will we find? Let’s take a look…

These graphics are enhancements of the papercraft model of the SS1K. I’ve actually taken the details from the perfectly-level port side graphic and flipped them around to match the slightly downhill starboard side, which is the angle we normally see the ship in the queue.

(These might make for some cool refrigerator or car-door magnets if anyone wanted to print them off on magnetic paper.)

[* Their old Tatooine Traders extra-letter typo pops up again. Rather than using the single glyph ‘orenth’ to denote a double O, they have used two ‘osk’ glyphs.]

Same text on the starboard side… but the colon is now oddly placed.

DO NOT REMOVE
THESE 2 SCREWS.
REFER TO MANUAL
FOR INSTRUCTIONS.

So far, these all seem fairly straightforward. Where are the inside jokes? Well, as Kevin Yee pointed out in his review of the ride, the number of the ship is 1401, the street number of Imagineering. Here’s another such joke…

Or my favorite bit of Disney referencing in the Aurebesh, these two lines on the underside of the newly painted X-wing which has been restored to The Star Trader:

“THE CHESHIRE CAT
THE MAD HATTER”

And look at this interesting little pattern just forward of the front landing skids.

Turn it on its side, and what does that resemble?

I wonder if that’s present on the actual ship?

Now, I have to admit, I had a little problem with seeing SO MUCH Aurebesh on the ship. Sure, it’s a logical progression here in the real world, but in the backwards timeline of the entire Star Tours history, why did it all suddenly disappear one day? I think somewhere between Star Tours: The Adventures Continue and classic Star Tours, there must’ve been some lawsuits by the indigenous people of this planet against the travel agency, forcing them to streamline their vehicular signage to all native languages. Let’s face it, it doesn’t make good business sense to open a travel agency on the planet Earth and cover the ship with door instructions and danger warnings in an alien language that the Earthlings can’t read.

But elsewhere throughout the queue, the Aurebesh is presented alongside its English equivalents. Screens showing planetary destinations transition from all-Aurebesh to all-English. Directory signs have large English and small Aurebesh underneath. And good ol’ Captain Rex has a cameo sporting a ‘DEFECTIVE – RETURN TO FACTORY’ sticker, with the English words appearing in nice bold letters above a smaller Aurebesh translation.

I love the attention to retro-continuity here, remember we will ‘later’ hear G2-4T say “I’m not the one who purchased all those defective RX pilots!” Apparently, after those ‘confusing signage’ lawsuits, they had to save a few bucks and snatch up all the discounted pilot droids they could find.

When you go to ride Star Tours: The Adventures Continue, you might want to carry a little Aurebesh translation card to entertain you throughout the queue. We at Endor Express hope this will give you something extra to help pass the time while you’re waiting in the queue lines!

Alex Newborn
Alex is a lifelong fan of the Star Wars movies and everything Disney, so his obsession with Star Tours comes as no surprise. Born in 1970, Alex visited Walt Disney World for the first time in 1975, and saw the original Star Wars film in its first theatrical run in 1977. He returned to Disney in the 80’s and the 90’s… riding STAR TOURS (twice!) on one fateful day in 1991. He has yet to visit Disney in the new millennium, waiting for both his children to be the required 40″ tall to ride STAR TOURS. “What I’d really like to see is a Tour chartered for the planet New Bornalex,” says Alex with a smile. The planet, mentioned first in Cloak of Deception, is a Tuckerization of Alex’s name, an honor bestowed on him in print by author Jim Luceno. Alex is currently at work on a partial realisation of his childhood Disney-in-miniature wish– he is constructing a hyper-accurate 1:18 scale Star Tours diorama to showcase his collection of park-exclusive action figures. In the meantime, Alex is always on the lookout for more STAR TOURS video or audio files, and other STAR TOURS memoribilia. Alex also is our site’s researcher, and comes with never seen before goodies, for your entertainment. Give him a round of applause guys.
Read more from Alex Newborn
Tags: Star Tours: The Adventures Continue, Aurebesh, Hidden Mickey, Kevin Yee
Loading Comments...