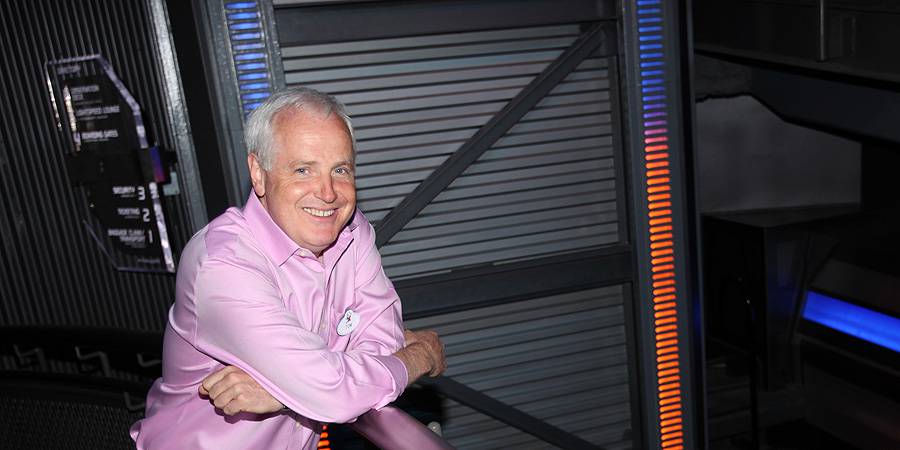 EndorExpress:  Good morning, Tom!  Thanks for taking time out for us again.

You have quite the association with Star Tours.  Can you tell us about your role with the attraction?

On this show I was the creative director and I worked on the original Star Tours twenty-five years ago as the writer and producer.  This time I led the team creatively on the new show.

Take us back a bit.  Rumors about an updated Star Tours has been formulating for over a decade.  When did this project really take-off?

Once Episode I came out in 1999, the calls started coming in saying, “So, when are you going to update it?”.  And we actually did a version of the show based on the podrace with George Lucas and we were ready to go!

And then we said, “Well, what’s going to be in Episode II?” That was a mystery and wasn’t revealed to us until the movie came out and we said, “Now we have to wait and see what’s in Episode III!”  One day we were thinking ‘gee, you know, the way our guests consume our entertainment these days, they see things over and over and over again.’  We were a little concerned that no matter how good a single show we might have created would be, over time people will say that they’ve seen it and done it a million times.  And we can’t have that.  So why does it have to be one show?  With digital technology why can’t we have multiple stories?  That’s where the notion came up of this branching storytelling that we have.

With so many planets in the Star Wars galaxy, how do you begin to decide where to go?

We wanted to make sure we took the best of the six films knowing that some people have a tendency to say “I’m a IV, V, VI” person and kids have a tendency to say “I’m a I, II, III” in terms of which episodes are their favorites.  Well this [Star Tours] is for everybody so we gotta really pick adventures that sort of cover the whole span of the six movies.

We had to have the podrace obviously, we knew we wanted to go to Hoth – we love Empire Strikes Back fans!  We wanted a speeder bike sequence but we didn’t want to go back to Endor since that was the original storyline so we ended up putting that on Kashyyyk, the Wookiee planet.  We wanted to make sure we had the most iconic faces and places.  We kind of put our show between the two sets of trilogies and we went through and picked out what we thought would be the most unique and also what would take advantage of the motion simulator the best.  We thought wow, something under water would be great, something on ice would be great…. There are different sensations than what we had in the original show which was all flying.  That’s what led us to the planets that we chose and the adventures that we picked.

I’m sure Star Wars fans everywhere are dying to know, are there any planets or destinations that were made but not implemented?

No, but you know the system is designed to be able to handle new things so depending on where the saga of Star Wars goes in the future, we can easily update it.  But having 54 combinations should keep people busy for a while.

We understand that you supplied your voice to one of the droids from the original show.  Can you tell us about the droids and their voices in the new show?

This is G2-4T voiced by Patrick Warburton, very funny, loved working with him; he’s worked with us on Soarin’ Over California and some other attractions.  [pointing at G2-9T] I only did this one because at the end of the day the team said “You know, we need you to do this for continuity.”

He does seem a lot more sassy this time around!  Was that a conscious decision?

[laughing] Well, maybe that’s just reflecting the voice talent!  This whole room [Sector 2] was changed because we really wanted to have the first room only slightly changed. This room gets changed quite a bit, and then the ride is REALLY changed so for the fans we wanted to make sure that when they came in the front door they say “Oh good!  It’s still here.  It’s what I remember.” But as they get into it, “Oh, they changed more than I thought!”

It’s sleeker and has a more “space terminal” feel to it than before.

It does.  The original was later in the saga when everything was getting pretty scary in the galaxy; it was a rougher beat-up kind of look.  But George [Lucas] in Episodes I, II, and III, he took the films to a sleeker look in terms of space craft and things, so we decided that we should match that.  And then this is all about taking what has changed since the original Star Tours show which is airport security and doing a Star Tours version of that.  So G2-9T is scanning luggage but he’s more interested in talking to the guests, which is just like the original show.

And this is our thermal scanner and G2-4T is just basically doing one-liners with the passengers.  We tried to put a lot more comedy in the show this time as well as all the action and there’s a lot more for you to look at in every scene so that if you’re in line, you’re going to discover all sorts of little things like Rex from the old show is there and he’s being sent back to the factory; he’s defective.  It’ll be a few years before he gets to pilot the Starspeeder.

A new feature in the queue is the portal revealing passengers walking by.  We see the silhouettes and a lot of things to look at.  Was Imagineering also involved with the additions to the Star Trader shop?

Our Imagineering team down here in Anaheim did that.  They took inspiration from this and we said sure, if you want to carry the airport theme to the exit, fine.

Do you have a favorite gag in there?

You know, the one I love is when R2-D2 comes out and opens up some satellites. When his head turns, it causes the satellites to become mouse ears.  That I think is a really cute gag.  There are a lot of funny things in there, things to discover each time guests come back to the attraction.

The safety spiel woman in the original pre-flight video was such an iconic part of the original Star Tours.  Does she [Stephanie Taylor] make an appearance in the update?

No, we couldn’t find her!  We don’t know where she is.  We tried, and that was our original attempt. To have her come back and reprise it.  And when we couldn’t find her we decided let’s create a new character that’s more in the Star Wars world.  So in the new video, nobody is in khaki pants or polo shirts; everyone’s in a Star Wars costume.

I will personally miss the T&C Surf Design tees that the kids were wearing.

[laughs] That’s sort of the challenge, things get dated very quickly so you’re better off making it a timeless Star Wars costume, even if the hairstyles betray you a bit.

Aly San San, voiced by Allison Janney is the new spokesbot of Star Tours.  Was it a George Lucas decision to make her a WA-7 droid?

No, that was us.  You know working with ILM, once we decided that we wanted to have a droid character they basically opened up a book and said “here are all the droids from the movies that we have designed already that you can pull from.” The pilot droid [ACE-38] we invented ourselves but for Aly San San, we liked that character and we’ll just make her look like Star Tours with the color palette, clean her up, and George gave her the name. 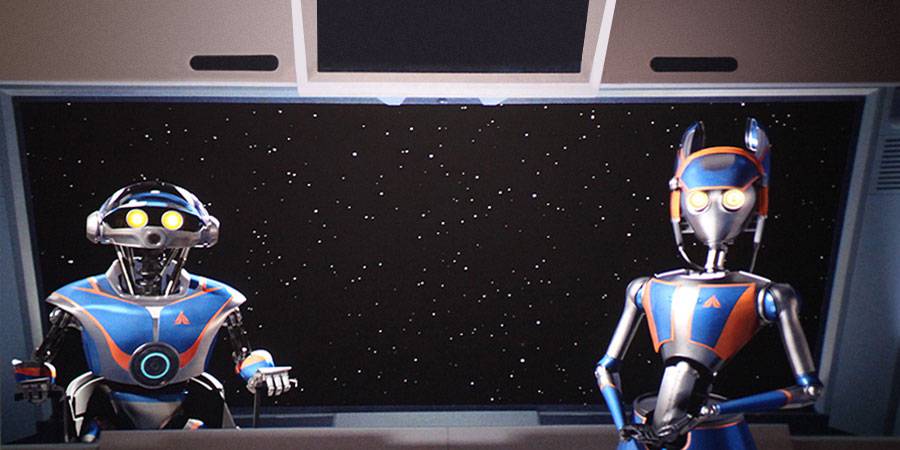 Disneyland fans are some of the most nostalgic fans around and their love for the original Star Tours show will always be there.  Will there ever be an opportunity to find the old Star Tours ride as a DVD or Blu-ray extra, similar to how the Back to the Future Ride has made it to Blu-ray?

No, we’re not aware of any plans to make the original show available on DVD or as a Blu-ray extra.  We are happy though that we were able to include references from the original in this new version.

Well, everything in the attraction looks great and it is incredibly fun… have plans been made to expand the updated attraction to Japan, Paris, and even Shanghai or Hong Kong?

While we don’t have anything to announce at this time in regard to Star Tours: The Adventures Continue coming to other parks, we are constantly working with our partners at each of our resorts in regard to keeping all of our experiences as relevant, entertaining and immersive to our guests as possible.

So what’s next for Tom Fitzgerald?

My portfolio work focuses on Disneyland Resort and Disneyland Paris so a lot of what I’m doing right now with our Imagineering teams is looking into the future.  The things that we’re working on today you may not see for three, four, five or more years.  I can’t talk about them but that’s the fun of what we do at Imagineering.

For me, this one is done.  It belongs to the guests now and it’s great to see them applaud and cheer but mentally I’m onto the next thing.

Although I do have a few more pick-up lines to do for this guy [G2-9T], a few more jokes for him.  Maybe sassy jokes. [laughs]