A long time ago in a Glendale far, far away…

One of the true highlights at the D23 Expo 2011, for us especially, was The Making of Star Tours: The Adventures Continue, presented by Imagineer Tom Fitzgerald. Much of what was shown to the audience was previously revealed in our interview with Tom back in June but during the presentation there were more details, more stories, and most importantly, more concept art to go along with them. It was a joy to experience the linear backstory of the attraction and for those who weren’t able to attend, we have a summarized version and many of the concept art as well. 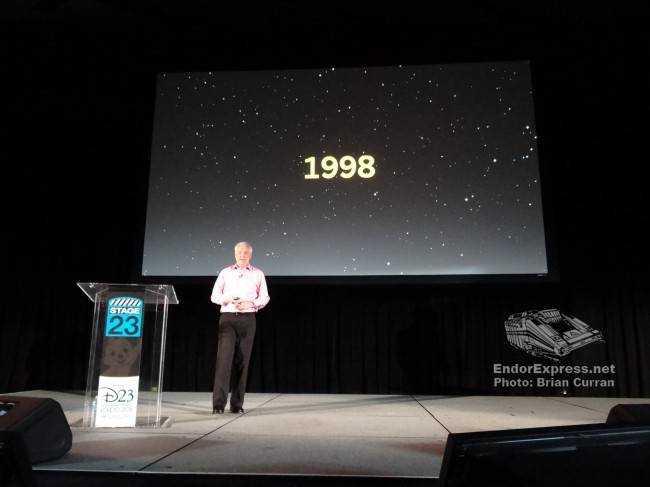 During the presentation, Tom Fitzgerald takes us behind the scenes of Star Tours with a brief history of the original Disneyland show leading into the new one, which really began in 1998 when George Lucas showed Imagineers a brief sequence of the Podrace from The Phantom Menace. With that, the Imagineers began boarding the new version of the ride. Rex would still be the pilot as the Boonta Eve Classic Podrace never stops occurring year after year. Droids in the queue would be building podrace parts and much of the attraction would remain the same or quite similar to how we knew it to be. The Podrace ride was already decided to be in 3D to resemble Anakin’s goggles. 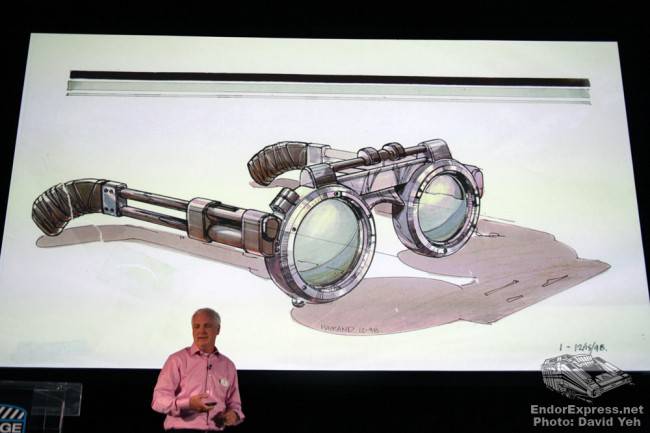 October 2003, the Imagineers had nagging feelings wondering what was going to be seen in Episode II and III. Realizing that the fans riding habits had changed, making one ride was not enough. Thankfully technology has advanced far enough along that different sequences was possible in digital. With George Lucas’ approval, various ride matrixes were created mapping out the different possible outcomes. 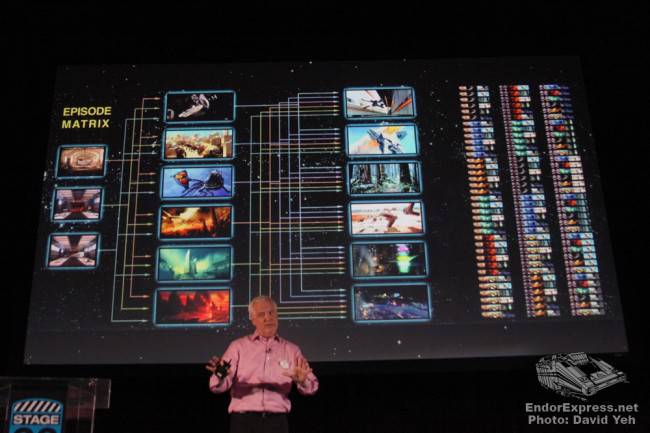 By 2007, the Episode Matrix had gotten closer to the final version. Mustafar was originally planned to be among the first grouping of planets we see but ultimately axed. Kashyyyk was revealed to be an idea of John Lasseter who wanted to see more from that world. Of the three holographic interruptions, Bail Organa was eventually replaced with Admiral Ackbar. 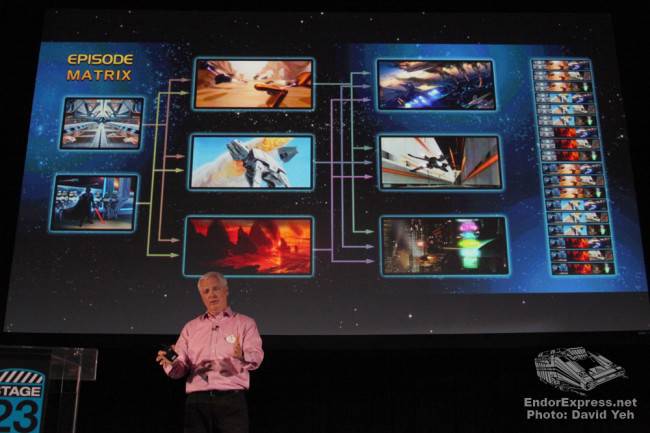 By October 2007, the storyboards of each sequence was presented to Lucasfilm, pretty close to what we know the ride to be with a few noticeable changes. During Tatooine, the Podrace announcers were meant to be present but ultimately removed. Unfortunately for Lucas, he doesn’t do storyboards anymore and it wasn’t until February 2008 when the animatics were presented to him. One of the animatics was shown to D23 audiences of the trip to Hoth and Coruscant. In this version, Darth Vader stops us for stealing the plans but it was George Lucas’ decision to do something different since we’ve already seen stolen plans in Episode IV. It was soon changed to Rebel Spy that was revealed by a speaker on the ride. Shortly after that the idea evolved into picking out a random passenger on the ride to be the Rebel Spy. 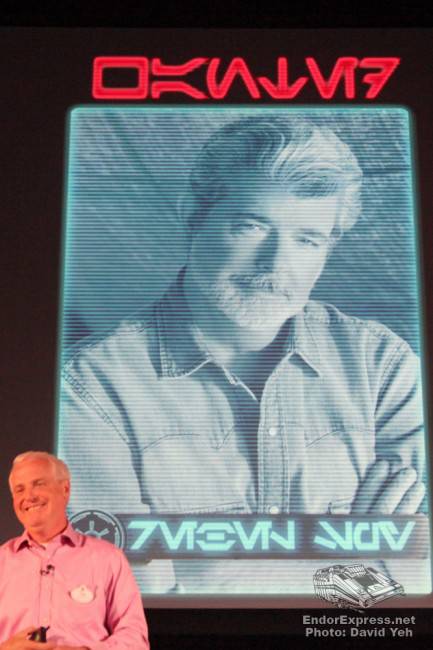 In May 2008, the animatics were approved and ILM was brought in to create the visuals. Kashyyyk was the planet that required the most work since a lot of that planet still had to be invented. And while much of it was digital, some things were filmed for real, such as a Wookiee hitting the windshield and some of the pre-show elements. 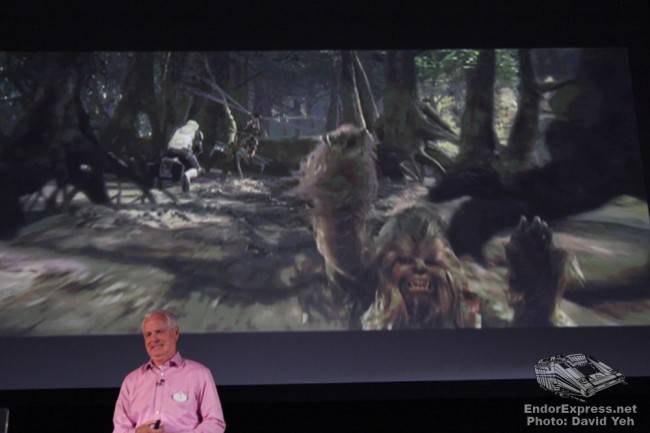 Tom Fitzgerald also raised the point about the amount of time a guest would be in the queue. In the past, they mapped it out and timed everything for the length of the queue but now with Fast Pass, folks stayed in the queue longer and WDI didn’t want them to experience any rollovers in gags and queue loops. So it was decided to make everything 20 minutes long: 20 minute pre-show, 20 minute droid room, etc, which allowed the guests to see something different every time they visited.

A lot of time was spent on the new pilot AC-38, a character that was intended to be a complete 180 from the bumbling Rex. Design-wise, artists at Imagineering came up with a transitional looking droid; a droid that would eventually lend to RX-24’s standard look. For the new show, Patrick Warburton was cast as Ace but ultimately, Lucas was not happy with the more serious pilot. It was problematic for the Imagineers as deadlines were fast approaching. It was then decided to make C-3PO the accidental pilot, which George Lucas liked. 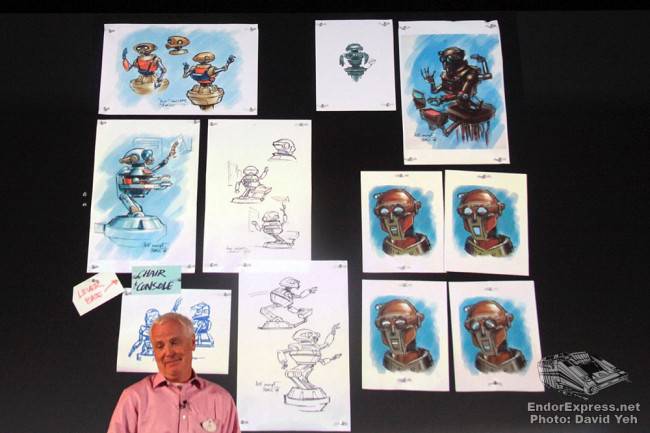 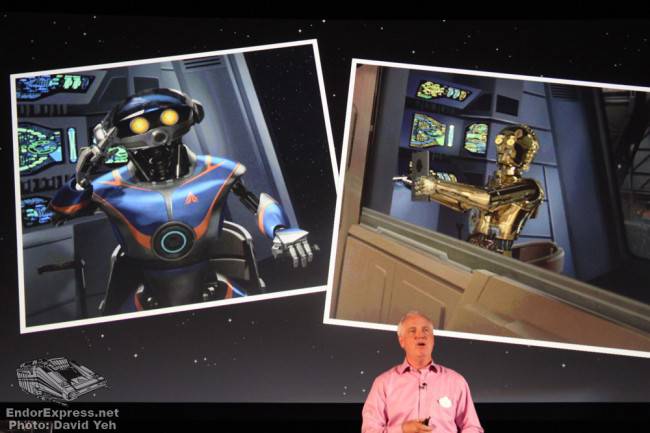 When it came to recreating the new Safety Spiel video, the original spokeswoman was intended to return in the update but as it were, she was unable to be found! It was for that reason they decided to dive further into Star Wars lore and use a droid or spokesbot to fill in that void. When looking for a voice, none was better than actress Alison Janney. 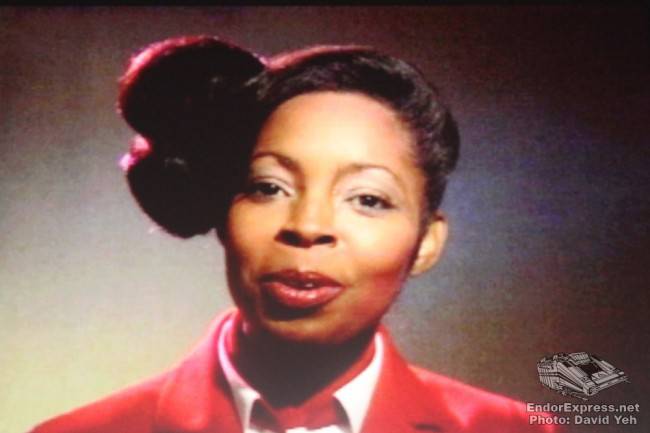 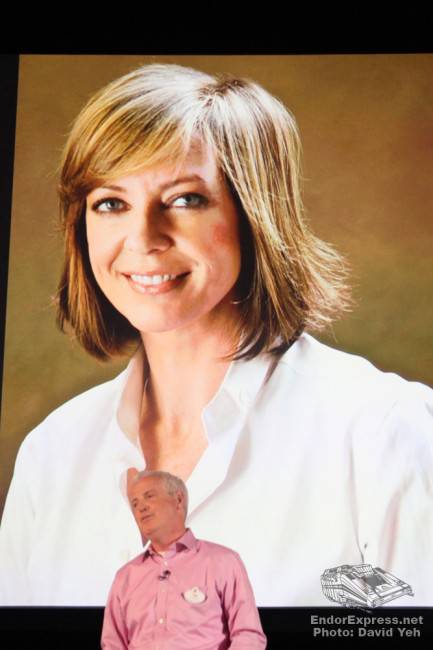 For the pre-show, the queue was given a refreshening: new screen, new paint scheme, updated droids, and new jobs. Star Tours is simple. It’s Star Wars plus going to LAX so the G2 droids were given new security jobs, one doing luggage scanning and the other operating the human scanner. And because Patrick Warburton wasn’t used as the pilot anymore, he was brought back to play the latter droid. 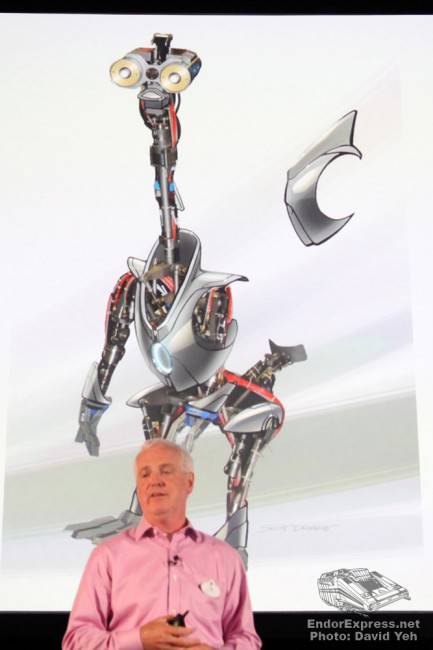 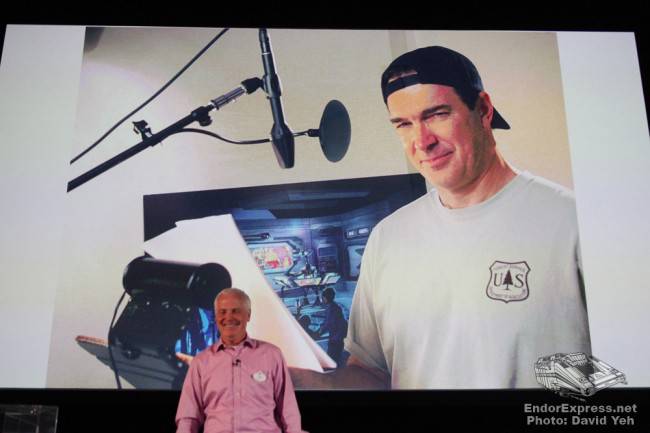 The luggage scanner trick was the last bit the Imagineers worked on and George Lucas urged them to have more fun with it since it WAS Disneyland. 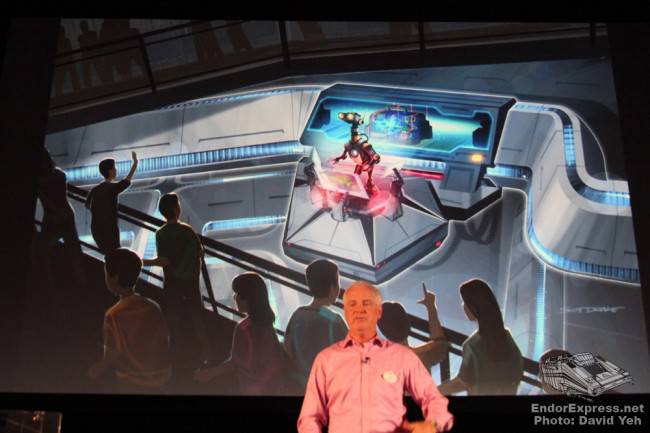 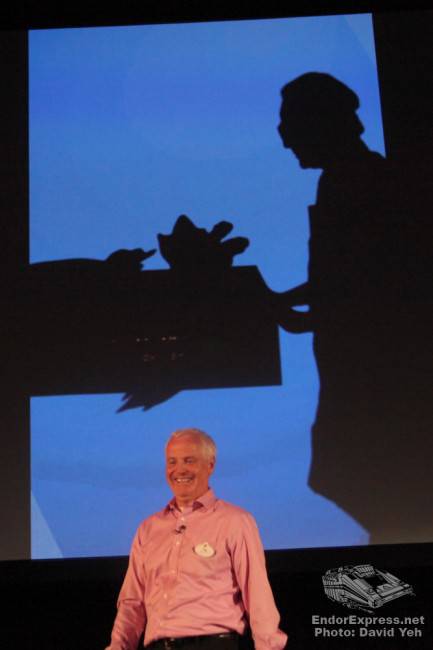 For the music, Michael Giacchino, who is a real Star Wars fan was brought in to help compose the music in the pre-show, creating travelogue lounge music done Star Wars style. John Williams, composer of the Star Wars Saga had heard that they were doing a new Star Tours and came to WDI to lend his ear. After watching the temp tracks that WDI had put together with the animatics, he said that the original cues would work just fine for the ride. 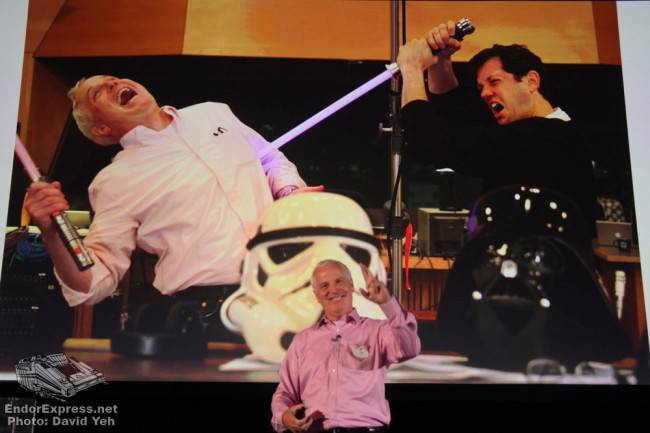 And for you fans of Rex, it was through Tom Fitzgerald’s blogs did he realize the amount of love and support for the original captain. Seeing those messages was what brought Rex back into the queue. So if you were among those who said something, pat yourself on the back! 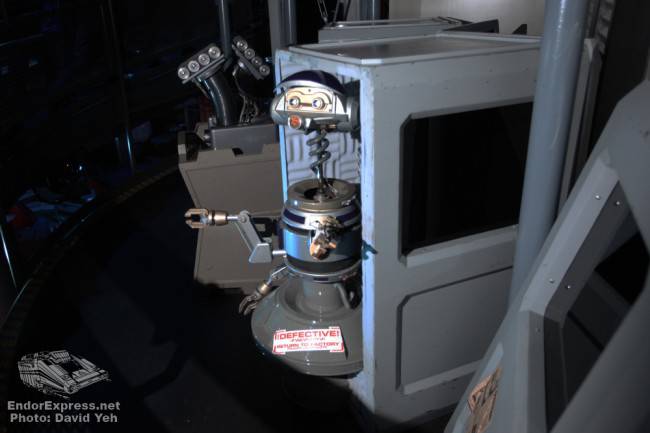 This wraps it up for our Star Tours panel update. Keep your eyes open for a further discussion with Tom Fitzgerald as well as Michael Giacchino in the coming days. 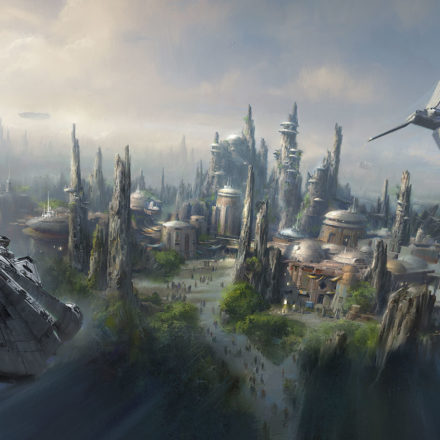 May 23, 2018 David Yeh
If you’ve been following along with the updates for Star Wars: Galaxy’s Edge from the original announcement, it has been widely known... 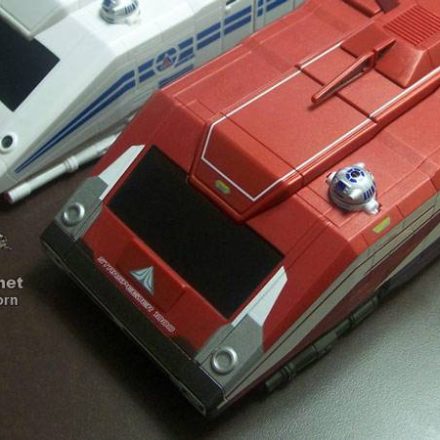 August 26, 2010 Alex Newborn
Booth 441 at CV was the place to find all of the convention-exclusive Disney merchandise, like the Last Tour to Endor t-shirt and pin, the Shadow...