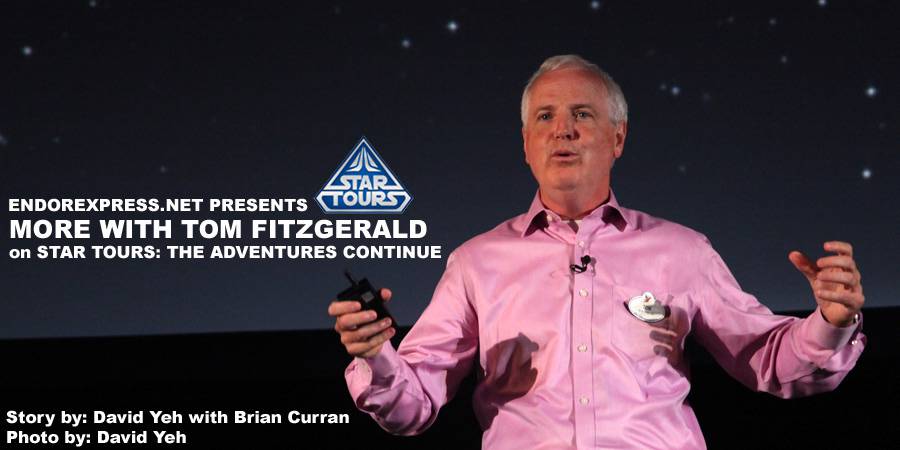 During the D23 Expo 2011, we had another opportunity to chat with Tom Fitzgerald about the new Star Tours attraction.  Even with almost every secret possibly revealed during his Behind The Scenes presentation, we had just a few more questions about the attraction and Tom was very gracious to spend a few extra moments with us.

EE:  Star Tours.  It’s out, it’s open.  Everyone has been able to ride it.  What has been the guest reception of the attraction?

TF:  It’s been fantastic!  We’ve worked on it for years, many years over a decade on this attraction and of course your goal is to have the guests love it.  And you know this was a little bit more under the radar compared to other big things that are happening like Cars Land, so I think a lot of people have been surprised.  I think a lot of guests are going “wow, I didn’t realize you were doing so much, changing the pre-show, and I didn’t know how cool the branching storytelling would be…” so it’s been really great.  Everyone’s been positive, positive, positive, which is what we like to hear.

It was revealed that Bail Organa was originally one of the hologram interruptions in addition to Princess Leia and Yoda. When and how was it changed to Admiral Ackbar?

Well, we just weren’t able to on our production schedule to get Jimmy Smits in to do it, so we asked who else should do it and you know… “It’s a trap!” [laughs]

[laughing] But he doesn’t say it!

Star Tours has been nicknamed Star Wars 3.5 because of where it lies in relationship to the films but it almost seems that it’s closer to Episode IV…

Yeah, we use that as a guideline more than a strict thing for our designers.  They need to know generally which places and which characters we can pick from but George gave us the license to say “you don’t have to live with that, just pick the best.”  And that’s what it’s all about; it’s about picking the ultimate Star Wars adventure.  And we’re really glad he said that because we really wanted to get Hoth in there.

We did find on C-3PO’s screen in the queue that there’s a Flux Capacitor on board the ship.  Thus making time travel possible right?

[laughs] Yeah. That’s an Imagineer having fun. You know, when you get that close to stuff people tend to sneak little things in.

Tell us more about getting Carrie Fisher on board.  How hard was it to get her to sign on?

Well, what most people don’t realize is that’s the original footage from Episode IV that Industrial Light & Magic were able to find the original element of Carrie Fisher against black, so we got the real thing which was great.  Carrie came in, looked at it and did some voice work with us.

Patrick Warburton was originally cast for Ace but eventually re-cast as the thermal scanner droid. Who voices Ace now?

We picked another actor (Lindsay Schnebly) because it was just that short vignette and a couple of lines in the commercial. We decided for Patrick that we wanted to give him a bigger role and we were looking for how could we make that character funny.  So he needs to be more like a stand-up comic up there with quick one-liners for people who are walking past. Once we got to working on that character we thought that would be great for Patrick.

Was there any talk with George Lucas about having a Captain Rex in the Clone Wars animated series?

And lastly, C-3PO.  How was it like working with Anthony Daniels again?

Oh, it was fabulous.  We’re friends as well as professional colleagues and it was fun. When we made the pilot switch I went over to London with a big storyboard book to tell him the news. Of course he was delighted. And he really knows that character better than anyone in the world and obviously helped us re-write the script to get the voice right.  And it was hard for him because the show was really intense.  A lot of what he was doing was shouting and it was really hard on his voice.  He said that it was one of the hardest recording sessions he’s ever had… BUT, he loves it and we love him.

And we love the attraction so thank you!

Special thanks to Frank Reifsnyder and Tom Fitzgerald.