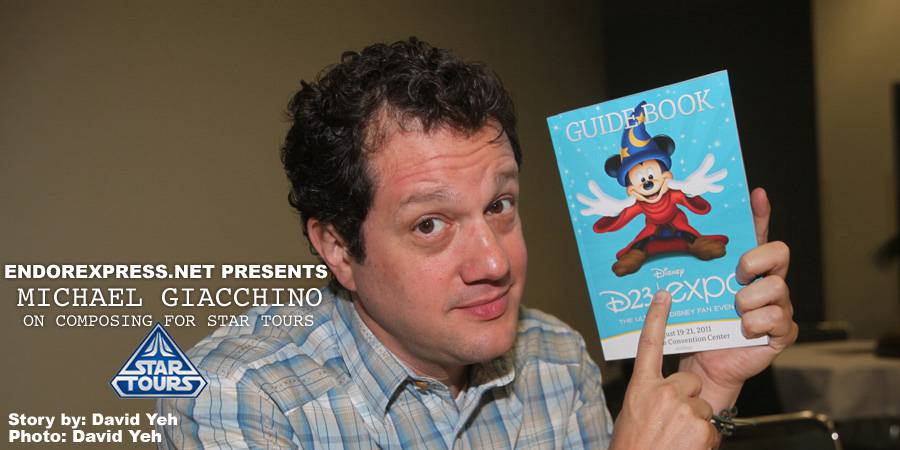 You know his name or at least, you know his tunes… as long as you’re a watcher of Pixar films and a theme park enthusiast at least.  Michael Giacchino, the composer behind such great scores like The Incredibles, Ratatouille, Star Trek, Cloverfield, Speed Racer, TV Shows as Lost, Alias and Fringe, as well as his Academy Award winning Up, is also one of the music-men behind Star Tours: The Adventures Continue.

I caught up with Michael recently at the D23 Expo in Anaheim to talk about his musical journey from his youth to Star Tours and beyond.

EndorExpress:  Let’s start way back.  Were you in the high school band at all?

But you had an interest in all kinds of music….

Yes, I listened to it incessantly, every kind of music imaginable I listened to.  I was always just very curious. In fact, it was Star Wars.  I remember reading the liner notes in the album when it said “the French Horns are playing Luke’s theme here” and I thought to myself “Oh my God, that’s what that was called”.  It was like looking under the hood at an engine and going “Oh that’s how this works!” and I remember that day I was sitting at home with my headphones and I had this revelation of what was going on.  Before that, I was just listening, not understanding what everything was and why.  With those liner notes, it gave me insight into what was really going on with the orchestra.  And from that day on I was obsessed with what instrument was doing what.

I recall reading the very same liner notes and it too fascinated me and got me more into music.  It’s also amazing to me that growing up, I would be watching these films going “Oh, I really like that score” and it would almost always be a John Williams score.  Nowadays when that happens, it’s Michael Giacchino.  It’s kind of a fun because you’re in really good company.

[laughs] Yeah, he was for me, a huge teacher.  He doesn’t know that but just listening to him and following his career has been a huge education for me growing up.

Is there a favorite genre or type of music you like to write for most?

I love all kinds of stuff.  I prefer to have something different each time just to keep things different and hopefully I can learn something new as well.

And now… let’s talk Star Tours!  What is your memory of working on this project?

Star Tours has always been one of my favorite attractions at Disneyland and I had done a few other things like Space Mountain and a few smaller projects like this Luxo thing and this Ratatouille thing and so they called me and asked if I would be interested in over-seeing the new Star Tours.  I said, “Are you kidding me?  Absolutely!” They said that they’d actually like me to write new music for it and I asked, “What do you mean new music?”  They replied “We’d like new themes.”  I said “You can’t do that!”  And I’m a massive Star Wars fan so you have to use the music from the movies.  They asked, “Really?  You wouldn’t want to write something new?”  “No!  I’m happy to take John’s music and make it fit for what you’re doing and rearrange it but we have to use John’s music.”  Think of it this way, I’m a huge Star Wars fan and if I walked in there and heard anyone’s music that wasn’t John Williams, I wouldn’t be happy about that.  I’d be pretty disappointed.

I said “If you want me to produce this and let me be involved using John’s music, I would love to do that.”  So we went that route and it was great because I got to sit down with John Williams and go over all of his music.  We talked about it and what we wanted to do.  What’s interesting about the queue is that it feels like an old-fashioned travelogue.  The videos you’re watching, you feel like you’re going on some adventure and the way they used to sell things in the 60s… the music in those old travelogues I used to love.  So you know, what if we took Yoda’s theme and we did them in that style?  And John Williams was really excited about that he was all, “yeah, that would be fantastic if we did that!”  We had this great conversation about that.  It was an amazing day for me because I’ve known John a little while now and he’s always been an amazingly supportive person with what I do, but to think about myself as a 10-year old kid, if you were to tell me that I would be sitting with John Williams one day, I would have lost my mind!  It’s just one of those crazy things that I was really lucky enough to have happen.  I had such a blast taking his stuff and having fun with it.

John Williams really is amazing and was more involved this time around.  How much say did he have on the ride portion?

Yeah, he oversaw all of that and he had a music editor that made sure everything fit perfectly. The music on the ride portion is music from the films and it’s cut and fixed so it fit perfectly with what’s happening on screen.  So there was a lot involved in cutting through it all.  Not unlike how they did it on the first go-round but I think they did an amazing job just making it feel like it was actually scored for that particularly thing.  As a fan, when you go on a ride, you want the real deal experience.  You don’t want someone’s reinterpretation of what they think it might be, you want the real deal experience and the only way to do that was to use those original scores.

And  most of what YOU did was for the main queue pre-show commercials.  What’s exciting is that when you walk in there, it’s familiar and yet it’s new…

Yes, exactly!  And you know, we didn’t want to get too… we didn’t want to use the same style of music through the entire experience because when you finally get onto the ride itself, it wouldn’t have been as fun or exciting.  So the idea was to create something slightly different and new in the queue and when you get onto the ride, Bam, you’re in Star Wars.  So that was kind of the whole thinking behind it.

Can we talk about the Star Tours chime by Richard Bellis?  We’re all so glad it’s still there.

Yes, Richard Bellis did that and I didn’t want to lose that.  Actually that was one of the first things I said to them.  I said, “We’re not losing that… I love that.”  Because that’s such an iconic thing and Richard created this little melody that’s so great and so perfect that the second you hear it you go “Oh yes, that’s Star Tours!” And I was really happy that they felt the same way as well.  Nobody wanted to lose that.  Did you know Richard Bellis was actually in a movie called Them! about giant ants?  Do you remember this movie?

You have to see this movie.  He plays this little boy in that.

I’ll add it to the queue.  I remember a story about him almost being a Mousketeer though!

Oh yes, there was that story too. [laughs]

Here’s some quick questions for you: Favorite ride?

Disneyland’s Space Mountain.  Always has been.

Even before writing the music for it?

Absolutely.  That was why I was so excited when they asked if I would like to be a part of that.  Love it, love it.  So great.  It’s so fun now going with my kids and to see how much they love it too.

Lastly, what can we expect to hear next from Michael Giacchino?

Nothing currently for the theme parks and nothing official for Pixar at the moment.  But right now I’m working on Mission: Impossible 4 and John Carter of Mars so those are keeping me pretty busy.

And we look forward to hearing them!  Thanks very much for your time!

It was a pleasure.

Read more about Michael on his official site, or watch the official Disney Blog feature on the Music of Star Tours: The Adventures Continue: