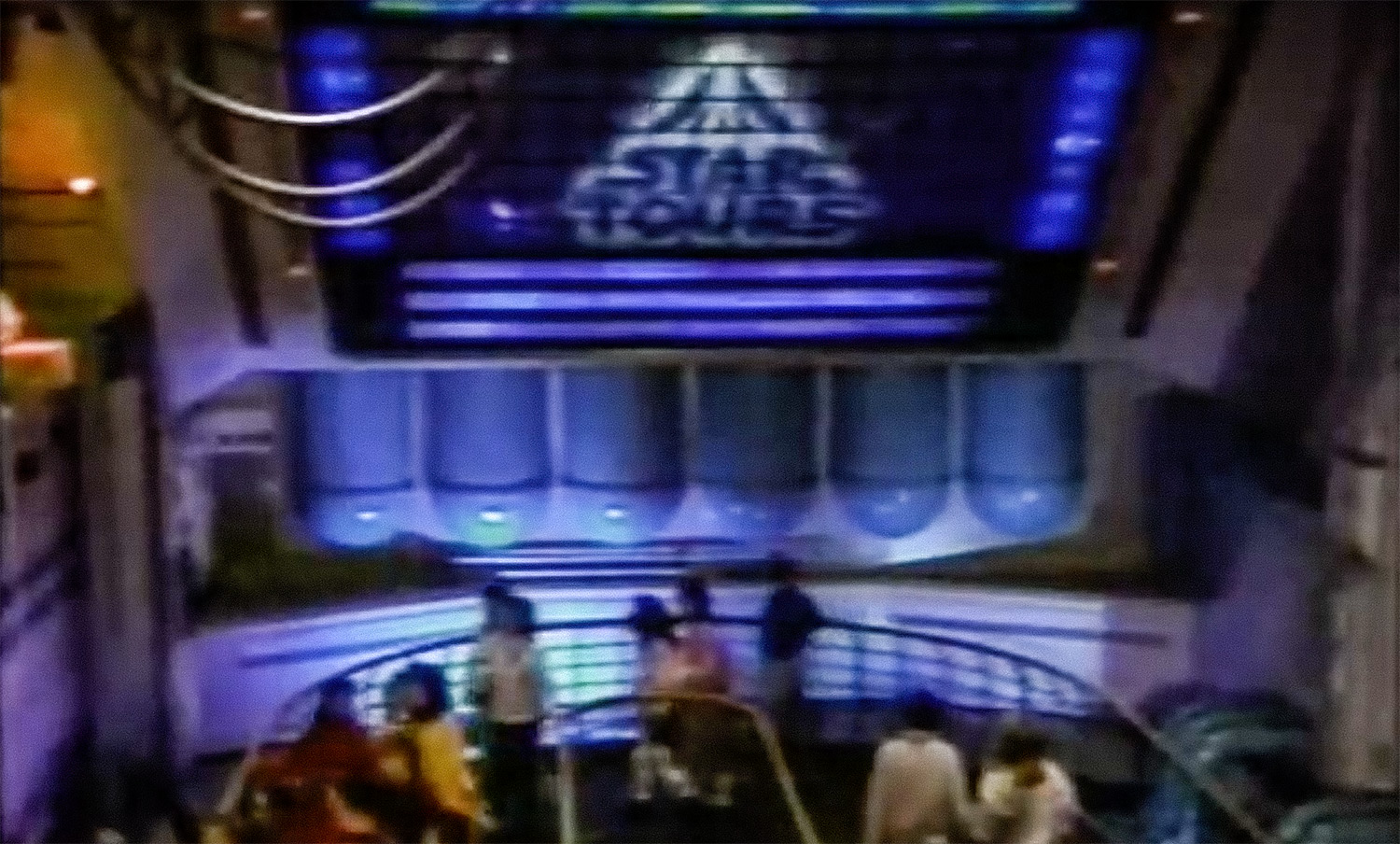 Wandering around YouTube and saw this little gem as a recommended video.

Hosted by Harry Anderson, the special starts off with a lot of Back to the Future music as its score.

Harry boards the parlor car of one of the DLRR trains, and it takes him back in time. Funny how the park opened in 1955 and all.

Out the windows, he gets to see Disneyland in construction and then he goes ever forward to see new attractions and various opening ceremonies. Even though we’ve seen a lot of this footage before in its original context, some great old clips are trimmed down here and juxtaposed for maximum impact.

I had a suspicion there would be Star Tours content from almost the beginning, when the ‘jump back in time’ scene steals the lightspeed tunnel from the original ST, and we even hear Rex’s voice at one point saying “Hi there!”

If you want to jump at that point yourself, skip to the 37 minute mark… I assumed it would all be presskit footage, then suddenly they showed a few pristine moments of the Threepio version of the safety rules, complete with Ree-Yees and his camera. Nice!

The representation of the onboard ride itself is all presskit stuff, but like other specials of the era, they didn’t use the John Williams music, replacing it with a more 80s track instead.

But I recommend watching the entire special in order… especially the “What a Wonderful World” montage about Walt’s passing in 1966.

And they interject lines of dialogue from Disney cartoons in cute ways too. Captain Hook says “So, you want a splash, Mr. Starkey? I’ll give you a splash!” and then we smash cut (splash cut?) to footage of Splash Mountain’s debut.

When the trip gets back to its own present (1990-ish), Harry talks about upcoming attractions and what years they are predicted to debut. Funny how few of them actually came to pass. Dick Tracy’s Crime Stoppers?

Alex Newborn
Alex is a lifelong fan of the Star Wars movies and everything Disney, so his obsession with Star Tours comes as no surprise. Born in 1970, Alex visited Walt Disney World for the first time in 1975, and saw the original Star Wars film in its first theatrical run in 1977. He returned to Disney in the 80’s and the 90’s… riding STAR TOURS (twice!) on one fateful day in 1991. He has yet to visit Disney in the new millennium, waiting for both his children to be the required 40″ tall to ride STAR TOURS. “What I’d really like to see is a Tour chartered for the planet New Bornalex,” says Alex with a smile. The planet, mentioned first in Cloak of Deception, is a Tuckerization of Alex’s name, an honor bestowed on him in print by author Jim Luceno. Alex is currently at work on a partial realisation of his childhood Disney-in-miniature wish– he is constructing a hyper-accurate 1:18 scale Star Tours diorama to showcase his collection of park-exclusive action figures. In the meantime, Alex is always on the lookout for more STAR TOURS video or audio files, and other STAR TOURS memoribilia. Alex also is our site’s researcher, and comes with never seen before goodies, for your entertainment. Give him a round of applause guys.
Read more from Alex Newborn
Tags: Harry Anderson