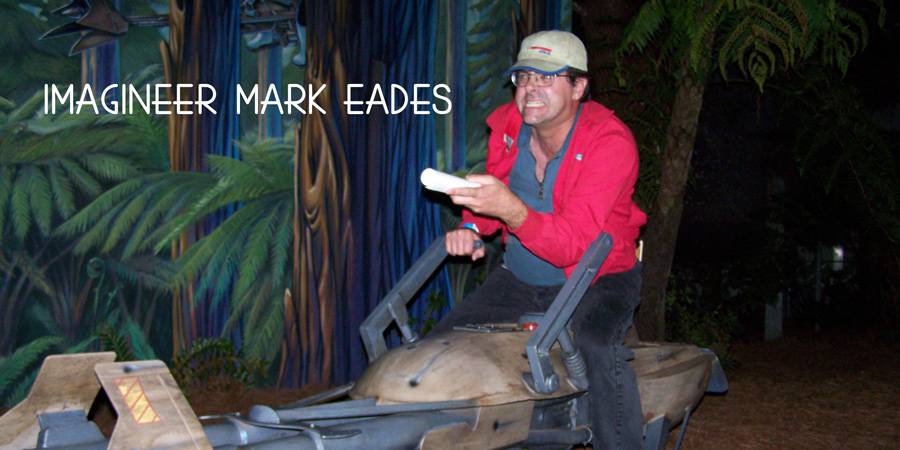 Former Walt Disney Imagineer Mark Eades has been kind enough to take the time to answer some questions for us.

EndorExpress: How does one fall into the role of Media Producer at Imagineering?
Mark: I had come over from the Disney Studios where I had been the supervisor of post production for the EPCOT Center films. Marty Sklar and Randy Bright asked me to come over to WED Enterprises when EPCOT opened. I ended up being just about the only film production person on staff after all the layoffs in 1983.

EndorExpress: Looking at the title, it would appear as if you handle attractions and shows that have a filmed aspect of it.  Is that accurate?
Mark: Yes, just about every attraction that had a film or video in it I had some kind of role in. I was also the Casting Director from 1984 until 1992.

EndorExpress:  What was the pitch you had for a Disney motion simulator attraction before it went into “Star Wars” mode?
Mark:  While researching simulators for most of 1983, I developed a simulator that had the classic storyline of an airline training simulator that had a glitch in it so we ended up flying in a lot of places and time. I also solicited ideas from across Imagineering. We had about 80. In the wrap up memo of the research I did I thought a really good use would be for the guests to take a ride on the Millenium Falcon and dump us into the bar on Tatooine.

EndorExpress: Was there anything that would make a great attraction in another section of the park? The airline simulation concept could have worked in Tomorrowland and at EPCOT.
Mark: There were a few underwater ones. There was even a fantasy one with the magic carpet picking up the vehicle from Aladdin (which was in early development at the time.

EndorExpress:  How much input did George Lucas have on the project from start to finish?
Mark: He was highly involved in the story development. ILM did the actual film.

EndorExpress: Do you recall who came up with the storyline that is closest to the final version we see now?
Mark: There were 12 of us gathered in a room by Randy Bright. It was a typical brainstorming session, a bunch of us at a table around a room with a bunch of index cards, markers and storyboards. We just started playing around. Eventually we decided it couldn’t be on the Millenium Falcon and came up with the idea of a space touring company. The first draft that Tom Fitzgerald pulled together off the storyboards would have been a 12-minute ride.

EndorExpress:  Was there anything that almost made it into the final product that got the axe at the last minute?

Mark: Not really. The way the simulator production process worked was a lot like an animated film. We got a basic script that timed in at about 4 minutes with simple storyboards. Then ILM made an animatic. Then they did a version that was a little more sophisticated which we programmed the test simulator with. We did a lot of riding on that one. Then committed to the final film.

EndorExpress:  Working on media, are you part of the crew that finds the voices for all the various droids and announcers in the pre-show?

Mark: I was the casting director. Some of the voices were Imagineering personnel including Ken Lisi, who was the supervisor of audio production. Mike West, now an executive at Universal, was also a voice. The passengers in the safety video were all Imagineering employees at the time, or their kids. We filmed that internally on the test simulator that was in the parking lot of Imagineering.

EndorExpress: How was Paul Reubens selected to play REX?
Mark: I saw Flight of the Navigator and thought the voice of the navigator would work. This was the year before Pee Wee’s Playhouse hit the air. Made the call and made the deal after selling it to Tom, George, Marty and Randy. Was there anyone else in mind? We tried probably 30 voices. Serious consideration was given to recordings by Billy Barty and Frank Welker, but we never felt they were right. We really wanted a voice that would come off as a slight cracked person. Paul ended up fitting the bill.

EndorExpress:  Are there any voice actors that worked on Star Tours who were unknown back in 1987 that we might recognize now?
Mark: No.

EndorExpress:  Did Mark Hamill provide the voice for one of controllers in the hangar bay?
Mark: No. Dennis Muren is in it, but try to find him.

EndorExpress: Are there any “Easter Eggs” on the ride you can share with us?

Mark: Hmmm, we sent the Mighty Microscope, after some repairs, up to ILM to see if they could put it in. The Might Microscope came out of the Monsanto “Adventure Through Inner Space” attraction that used to be in the building that now houses Star Tours at Disneyland.
Also, all the baskets full of junk in the preshow, along with many of the pipes and doors have letters and numbers on them. Nearly all of them represent the initials of a person that worked on the attraction and the numbers represent their birthday or telephone extension. Mine is the basket that says: ME 0827 on it.

Also, the original title for the attraction was to be: Star Rides, at Michael Eisner’s insistence. We kept fighting it and fighting it until he gave in.

EndorExpress: During your career at Imagineering (1982 to 1993) what other attractions did you get a chance to work on?

I also was part of the development team for “Honey, I Shrunk the Audience.”

EndorExpress: Which are you most proud of?
Mark: Muppet*Vision 3D and Star Tours

EndorExpress: Are you still in contact with your WDI and/or ILM co-worker/friends with whom you worked on Star Tours?
Mark: A few.

EndorExpress: 23 years later, how do you feel Star Tours has held up?
Mark: The concept still works, but the idea of different “tours” was never done.

EndorExpress:  Star Tours has by far the best (most entertaining) queue. How much work went into that?
Mark: We were given a budget of $1 million for that queue, and that covered everything, hardware, lighting, props, AA figures, sound and those commercials on the status board. We worked hard to make that queue area work. Chris Tietz pulled together the design and worked a lot of hours. Davey Feiten really worked on the programming of the AA figures. I produced those “fake” Star Tours commercials, with Bob Zalk helping out a lot.

EndorExpress: Did you get to work with Anthony Daniels?
Mark: I hired Anthony. He not only recorded all of C3PO’s voice stuff, he threw in a couple of others including the page for Egreog Sacul. He also recorded a video of him acting out the entire C3PO sequence.

EndorExpress: What were some of the highlights of working on Star Tours?
Mark: The whole project. But the best story I can tell is about the day we opened the ride (unannounced) for one day about six months before opening. We wanted to see how guests would react to it. The preshow wasn’t really done yet. George came down too.
So we went on the ride and had the park open it up for a couple hours and we stood outside the exit and listened to the guests, and also went on a few rides to see how they reacted to the ride. We were also watching the “barf” factor.
The best comment I heard from one guest as they were exiting was “Can you imagine how many miles of track Disney had to build under the park to handle this ride?”

What was also neat was that George had shaved off his beard at the time, so no one recognized when he walked into the preshow except me.

EndorExpress: Did Imagineering have any say in the design of the Star Trader when it had the “Star Wars” look? (For instance, the X-wing (now located above the Starcade)?

Mark: Yes, but I was not involved.
EndorExpress: Of all the Star Tours at the Disney parks (Anaheim, Orlando, Paris and Tokyo), do you have a favorite?
Mark: Disneyland. It was the first.

EndorExpress: Do you have any Star Tours souvenirs or collectibles?
Mark: Yes, including an opening day crew member jacket that has never been worn and is still wrapped in plastic.

EndorExpress: A update to Star Tours was recently announced at the D23 Expo. What are your thoughts on Star Tours 2.0?

Mark: I am glad to see the new version coming and think it’s about time. If it truly has a variety of trips and endings then they will have achieved on of the original thoughts that Randy Bright and I had when first looking into simulators in early 1984. It was a way to come up with an attraction that could easily be changed out. Granted in 1983 we had no storyline. I was just investigating simulators and how they might and could be used in an attraction at the Disney parks. When the attraction opened a few years later we talked about starting the development of the next Star Tours trip, but we were told to drop it. Here it is more than 20 years later and they are finally changing it out.

EndorExpress: When was the last time you went on Star Tours?
Mark: In January (2009)  during a visit to Disneyland, and two years ago in WDW on a family visit down there.

Since we have been in contact with Mark for this Q&A, I had the chance to meet Mark at Disneyland on the day of the original Star Tours Final Flights July 26 2010. Mark wrote a awesome article in the OCRegister which can be found at the link below:

Mark got to take home his Sector 2 parts basket after the original Star Tours closed.

Staff
The combined efforts of the Staff of EndorExpress.net
Read more from Staff
Loading Comments...