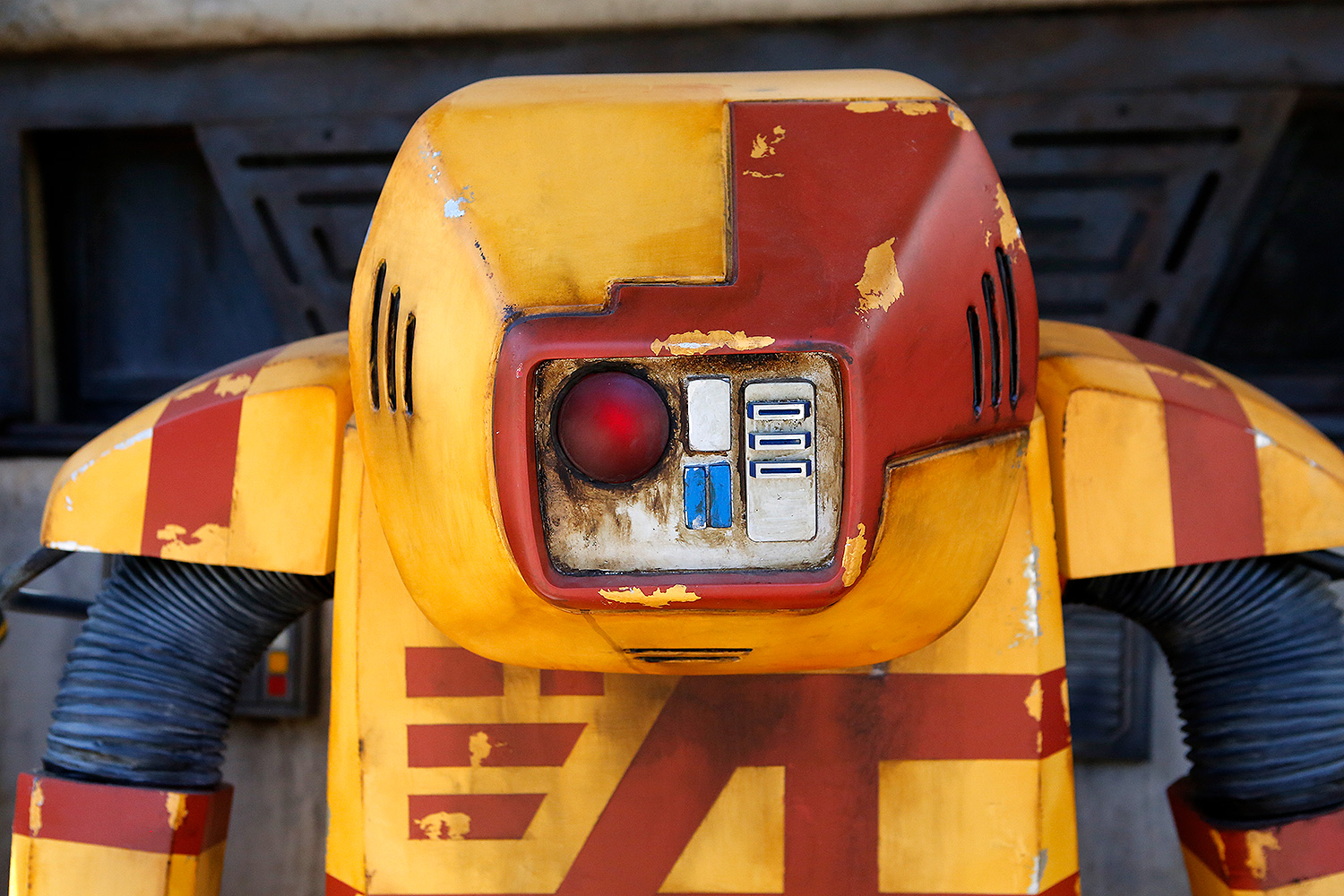 Droids are an integral part of Star Wars and it just wouldn’t feel right without them. In Black Spire Outpost, maybe there aren’t enough interactive droids, but there are quite a few if you look hard enough. But who are they and what’s their story? Some of the droids in the land have actual jobs or functions while most inactive droids serve as set dressing. While not all of the droids have their backstories revealed, many are discoverable via the Play Disney Parks App. Disney Parks Blog provided an introduction with “Meet the Droids of Star Wars: Galaxy’s Edge” but I’m sure if you’re like me, you wanted a lot more information for the other droids in the area.

While this isn’t the definitive listing, and many droids are still unnamed, this is as complete as we can find thus far. While Walt Disney World’s Galaxy’s Edge has a few name variations in that version of the land, below is what has been established for Disneyland Park. We’ll keep updating as we discover more, and if you find any more clues or hints, don’t hesitate to let us know!

4XB
The Programming Droid made its first appearance in Solo: A Star Wars Story. This one is located in Black Spire Outfitters. (thanks to Tim Veekhoven for the correction)

8D-J8
As a former smelter droid, 8D-J8 was reprogrammed to do one thing: turn the meat on the spit at Ronto Roasters, ensuring they are cooked to perfection. This droid brings the heat and is ready to bring your taste buds to a new galaxy.

B5-SL
This BB-Unit can be found in the cage behind the cashier’s desk in the Droid Depot.

BB-8
Poe Dameron’s feisty droid is seen twice in the new attraction, Star Wars: Rise of the Resistance. First in a hologram briefing room and then inside Poe’s X-Wing, Black One.

BK-86
This IG-Series droid is Dok-Ondar’s Security Droid – and seems a bit busted from a shootout with Kase Finto, who tried to sell fake Lothal gemstones. Dok leaves the droid as a warning to anybody who thinks of crossing him.

C1-4B
Similar to Chopper (C1-10P) in Star Wars Rebels, this one is hanging out in the Droid Depot.

CH-83
This BB-Unit is stashed in the back of the Droid Depot.

DJ R-3X
This former pilot droid, known as “Rex,” crash landed on Batuu and was reprogrammed into a DJ by Mubo at the Droid Depot. Mubo gave Rex to Oga Garra to pay off a debt, and “DJ Rex” now provides the musical entertainment inside Oga’s Cantina – and he’s still as chatty as ever. Get ready to move to the tunes of the galaxy as DJ R-3X spins the greatest hits.

EG-01
This power droid is outside of the Droid Depot.

G4-S8
Another atromech hanging in the back of Droid Depot

JB-9 (Left)
A BB droid on display at the Droid Depot. (MB-12 is on the right)
Manufacturer: Astromech
Model: BB-Series

K-7R1
Imperial Security Droid was made popular in Star Wars: Rogue One by K-2SO.

M5-R3
A droid belonging to X-Wing Red Leader, Garven Dreis, had an R5 unit with very similar markings named R5-K6 but a Funko Pop! release at TARGET in 2020 revealed this droid’s name is M5-R3.

An upside down Power Droid is on the left.

R1-J1
An older astromech droid, first seen in Star Wars: A New Hope, this one is seen hanging out outside of the Droid Depot.

R2-D2
Everyone’s favorite droid from the original Star Wars is here and he can be yours! If you have enough credits at Droid Depot! You can also spot R2 roaming around Batuu.

R5-P8
This sassy droid is Hondo’s most capable astromech and serves as an automated repair mechanic on the smuggler’s many starships. He calls Hondo out on many occasions, always keeping the pirate on his toes. Find him at the Spaceport inside Millennium Falcon: Smugglers Run.

S3-R9
This astromech is sitting in the back of the Droid Depot.

These droids are found throughout Batuu, but the jury’s still out on what their names are. If you hear anything, let us know!

R2-Unit
This pair is at the Droid Depot and are busy working on something… name still unknown. B5-SL is on the left.

Death Star Droid (RA-7)
The RA-7 Protocol Droid is known for the insectoid head. Seen on the Jawa Sandcrawler as well as aboard the Death Star in Star Wars: A New Hope.

EV-Series Supervisor Droid
This droid was seen in Return of the Jedi at Jabba’s Palace.

Architect Droid, Pilot Droid (L3), KX
There’s a few heads hiding in random areas of the Droid Depot. The Architect Droid on the left has been seen in the animated series. A Pilot Droid similar to L3 in Solo: A Star Wars Story is in the center, and another KX droid on the right.

Pit Droid
The DUM-Series Droids are used for repair, seen in Star Wars: The Phantom Menace as well as the updated Star Tours.

Power Droid
Power Droids are everywhere in Black Spire Outpost. This one can be spotted hanging in Docking Bay 7 Food & Cargo.

Power Droid
This power droid is the lone GNK found in the Resistance camp on Batuu as you snake your way to the briefing room.

Probe Droid
This droid is too busy to notice you during Rise of the Resistance.

A head of a 2-1B Medical Droid is on the left with a standard Protocol Droid in the center.

R2 Units (Deceased)
This pair of R2 units have seen better days. You can find this pair crashed near the Frontierland entrance at Disneyland.

R2-B1
This droid has similar style markings as R2-B1, a heroic astromech droid seen on the Queen’s Naboo Cruiser before he was blown away.

R2 and R4 Droids
More droids in the Droid Depot

R5 Droids from Rise of the Resistance
These First Order droids were hacked to rescue Resistance fighters aboard the Star Destroyer and currently don’t have any identifying names.

Treadwell Droids
Used mainly for repair, these droids are handy around hangars and garages. Red can be found in the queue for Millennium Falcon: Smuggler’s Run while the Blue is hanging out at the Garage where a Landspeeder is parked.

And that’s all the droids we spotted so far. We’ll continue to update this page as more are discovered.