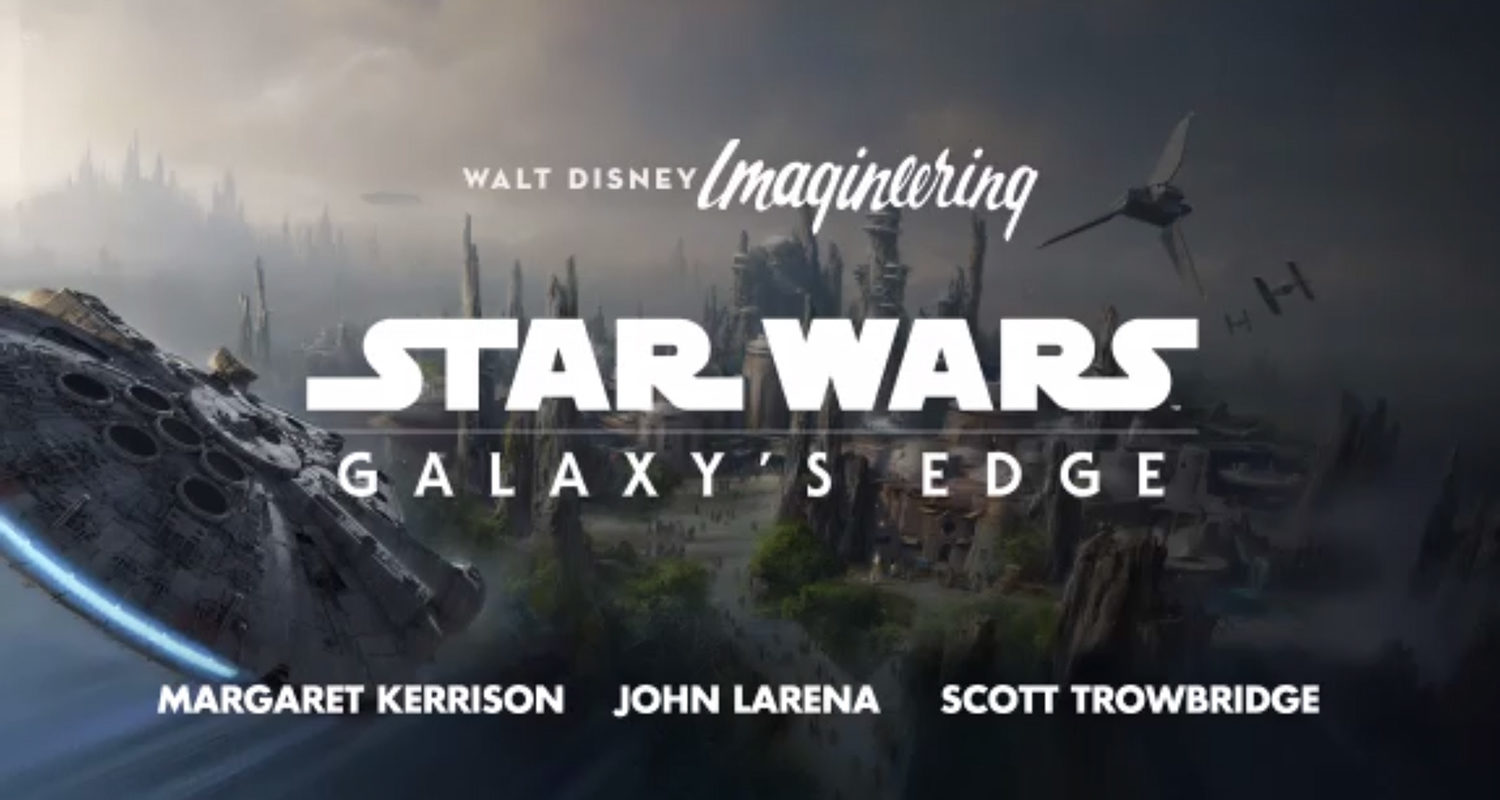 The creation of Disney’s award-winning land Star Wars: Galaxy’s Edge has been well documented ever since it was announced years ago. Fans, however, eagerly want more backstories about the creation and building of the world of Batuu. Fortunately for us, some behind the scenes are very accessible, such as the The Imagineering Story and the Star Wars: Galaxy’s Edge – Adventure Awaits special, both available on Disney+. Other methods of learning about the land are a bit more exclusive, and may involve attending the University of Southern California or knowing someone who does. In January, USC put together an online panel of Walt Disney Imagineers, all USC alumni, who presented a behind-the-scenes look at the creation of Star Wars: Galaxy’s Edge. The panel included Margaret Kerrison, Managing Story Editor; John Larena, Creative Director; and Scott Trowbridge, Creative Executive. While we can’t show you everything, here are a few highlights. (WARNING: SPOILERS AHEAD)

The Imagineers along with the team from Lucasfilm went back to the beginning of their fandom of Star Wars… why did they fall in love with Star Wars? What was that promise that Star Wars gives to fans old and new? Bob Iger pushed the team to be ambitious, but it was all about putting the guests into their own Star Wars story, to create a place where new stories could be told.

The codename for the project early on was called DELOS and the team was at first unsure about taking over part of Frontierland’s Rivers of America, but the beautification project was approved and gave the Disneyland Railroad its only left turn. You can see in the overhead shots just how massive the footprint of Galaxy’s Edge is when compared to the existing park.

Over 4,000 people touched the creation of Galaxy’s Edge at one point or another. Over 1,000 Imagineers and also the many many Cast Members at both Disneyland and Walt Disney World that bring it to life.

In short, it was an enormous undertaking. Here’s a look at the creation of Rise of the Resistance and the conduit before the concrete was poured over.

New innovations and techniques were pioneered for all aspects of the build. Imagineers could pre-visualize and pre-ride attractions in virtual reality before any steel was laid down. This allowed them to make the smartest choices when it came down to finally building the attractions on-site.

Aspects of Galaxy’s Edge were being produced all over the globe, including some media production in Nigeria. X-Wings were built in California. TIE Echelons in Thailand. Developing new ride-systems in Glendale, CA, the list goes on and on.

Themed entertainment is not just what you see and hear, but what you feel, smell, and taste. Scott Trowbridge and team went through as many as 35 versions of Blue Milk at their Flavor Lab in one sitting. Since there was never a clear recipe or method for the drink seen in the films, it had to be perfect by the time it reached guests. Oga’s Cantina was a difficult part of the job trying a number of cocktails… (right haha).

Here, a carver in Mexico City creates one of the friezes seen at the entry of Dok-Ondar’s Den of Antiquities.

For Millennium Falcon: Smugglers Run there was a particular challenge: the illusion of one. Meaning, there’s only one Millennium Falcon, there’s only one cockpit. So how do you cycle so many guests through and have an experience that is convincing? Imagineers went through several versions of how, including putting them on conveyor belts, multi-floor buildings with elevators… all before finally landing on massive turntables with a number of cockpits on each.

The cockpits are cabins on top of motion bases set inside of dome screens on top of turntables… and if they did their job right, you won’t ever think about how this is done. It’s quite complex if you really think about it!

Here it is as-built, with all seven cockpits on four turntables hiding behind the rock-work hidden from view.

Building the Millennium Falcon in the land is another story entirely. In the films, it was built by hand and not a lot of information or drawings existed from movie to movie. Imagineers took all the information that was available in order to coalesce a definitive version of the famous ship to be built full size, which has never been done before.

The Falcon was treated like a real building using primary steel and secondary steel. Both Falcons were built at the same time and then taken apart to ship to the United States, so that was the one and only time you could find two Millennium Falcons in the same place.

Moving onto Rise of the Resistance, every inch of the attraction was kept authentically Star Wars, from the shiny floor of the Star Destroyer to the ceiling… immense effort was taken to execute 200,000 square feet in both Anaheim and Orlando. It took hundreds of construction people, architects, scenic artists, managers, ride engineers, and more.

The AT-AT’s were so massive, the show building had to be built around the skeletons. Once the building was done they were able to go in and fabricate the rest of the vehicles.

Creating the ride began with the rough idea of getting captured. Board a vehicle piloted by a droid, and then into an escape pod. From the beginning, the trackless vehicle would play a key role in the attraction, and according to John Larena, you should always design your attraction from your ride vehicle outward. How many guests per vehicle per row… will determine how many people you can get through an hour and ultimately how big your building will need to be.

An old Star Tours cabin played a key role in early tests from getting the vehicle into an escape pod and then exit on an entirely different floor. Previsualization was pivotal in getting the timing and execution just right.

Another important piece of advice is to settle on design early. Multiple teams work in order to get all pieces of the attraction built simultaneously. If it’s all locked early on, there won’t be any surprises. Take a look at these early animatics leading to the final result. There’s not much of a change between them from a design standpoint.

The team were also lucky that Galaxy’s Edge was created while the Star Wars Sequel Trilogy was being filmed, giving them the opportunity to work with the leads to add to the experience. That meant locking the script down well in advance so there would be no regrets when the attraction is finally finished.

Daisy Ridley (Rey) was filmed during filming of The Rise of Skywalker while Oscar Isaac (Poe Dameron) was filmed during The Last Jedi, including the use of his X-Wing on a gimbal. Scans of Domhnall Gleeson and John Boyega were used to create animatronic versions of their characters in the attraction.

Each version of Rise of the Resistance has 34 animated figures, more if you include the R5 droids that are on each vehicle.

John Williams’ music was integral to the design of an attraction with wall-to-wall music. The London Symphony Orchestra was used to record the music heard in the attraction. Here, you can see the orchestra conducted to the animatics of the ride a year before everything would be put together.

The pacing and intensity of the attraction was carefully thought out in Rise of the Resistance. The tense moments are often as memorable as the climactic moments. Imagineers graphed out the intensity throughout the entire ride to make sure all of it was building to a satisfying end.

We hope you enjoyed this recap of Bringing Star Wars: Galaxy’s Edge To Life, and thank you to those who shared their screen grabs with us. Til the Spire!