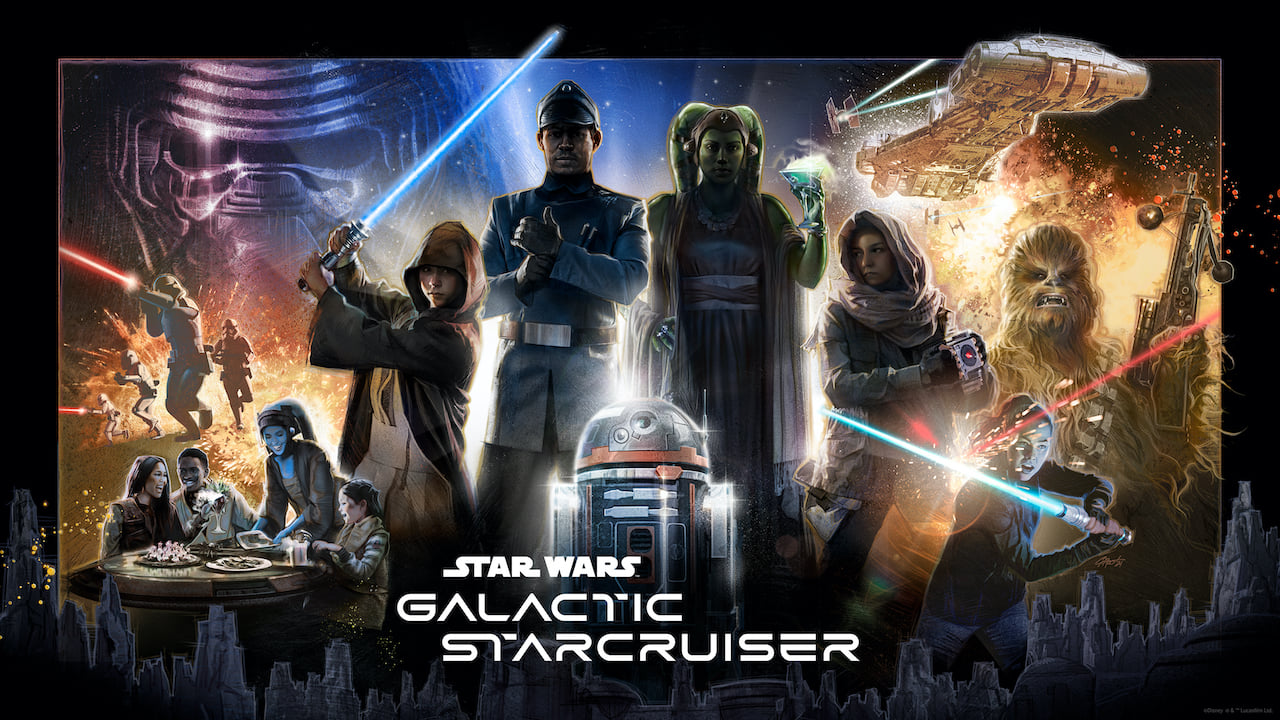 DisneyParksBlog has revealed their new poster for the Star Wars Galactic Starcruiser and it is filled to the brim with details. Take a look!

-The Halcyon starcruiser, in the upper-left corner, is your home for this two-night adventure. The sleek ship is known for its impeccable service, fabulous entertainment and exquisite dining, all of which you’ll get to enjoy during your vacation. (Side note: You can see a model of the shipright now in Walt Disney Presents at Disney’s Hollywood Studios.)

-There are four people at the center of the poster – a youngling wearing Jedi robes and wielding a lightsaber, an adult dressed in the uniform of a First Order officer, a Twi’lek adult, and another youngling who appears to be holding a piece of technology of some sort. These figures are meant to represent you, the travelers, because Star Wars: Galactic Starcruiser is about your choices and how you live your personal Star Wars stories. Do you want to support the First Order? Live like a Jedi in training? Or perhaps become a member of high galactic society? It’s all waiting there for you to discover and decide.

-In front of those central figures is an R-series astromech droid – but one that seems to have a few extra bells and whistles. Hmm … I bet there’s a story there, too.

-In the lower left, you see passengers enjoying the remarkable cuisine offered in the Crown of Corellia Dining Room, the starcruiser’s enticing supper club. The food and drink certainly seem otherworldly …

-The image in the lower right is something I’m incredibly excited for – lightsaber training! That’s right, as part of your experience, you’ll face off with a training remote similar to how Luke Skywalker once did and learn the lightsaber’s ancient ways.

-Looming above all this is the intimidating visage of Kylo Ren. Couple him with those First Order stormtroopers charging into the scene on the left-hand side and … I have a bad feeling about this. The Halcyon starcruiser does have a storied past, after all, and a reputation for finding itself in the middle of galactic conflicts. Luckily Chewbacca and his trusty bowcaster are there in the upper-right corner. Remember, it’s not wise to upset a Wookiee!

-And don’t miss what’s happening at the very bottom of the poster. There’s something very familiar about those spires – especially to anyone who’s traveled to Batuu. I’ve heard the Halcyon starcruiser is adding that far-flung planet to its itinerary starting next year …

Visit starwarsgalacticstarcruiser.com and sign up to receive updates as they’re released!