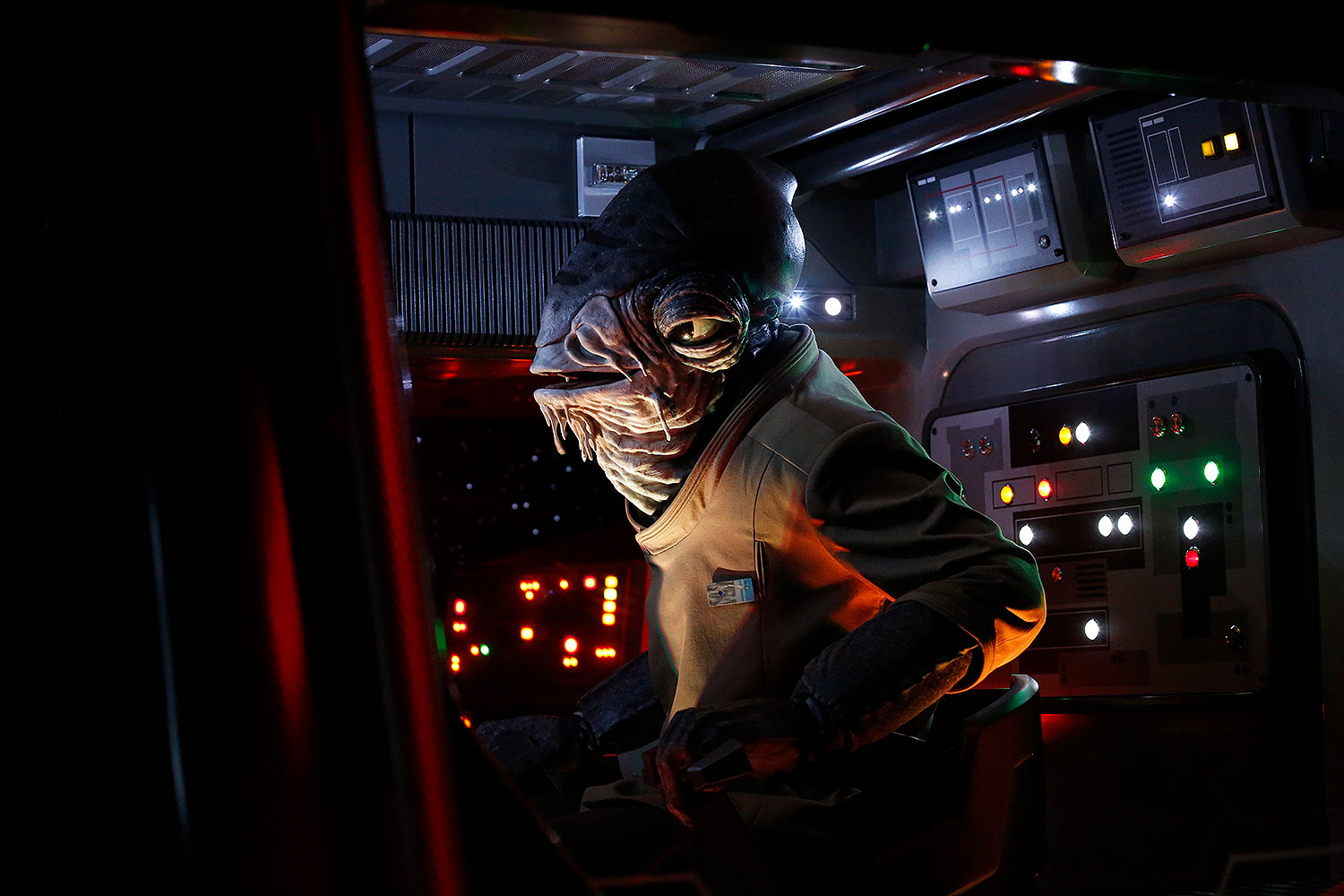 David Yeh
Star Wars: Rise of the Resistance – All The Photos (SPOILERS)
By David Yeh

Star Wars: Rise of the Resistance has opened on both coasts so we thought we waited long enough to share some photography from Walt Disney Imagineering’s latest immersive romp. This post will indeed spoil your experience if you haven’t ridden, so by all means turn away! If you’ve been on the ride and just curious to catch something you might have missed, this is for you. Below are pictures taken at Disneyland’s version that just opened. If you’ve ridden the Florida version, do you spot any differences? Perhaps in the queue? Let us know!

We’ll use words from Disney’s official press release to walk you through the visuals and add a few of our notes as well. So without further ado, let’s Rise!

Editor’s Note: You’ll find the familiar ships like the A-Wing and X-Wing parked nearby.

The gateway to the encampment is marked by a large turret. From there, a pathway leads deeper into the forest toward towering cliffs and the crumbling remains of an ancient civilization. Guests weave through low stone walls, timeworn pillars and tight corridors as they progress farther into the base, hearing military communications chatter along the way.

Editor’s Note: There’s a long way through the queue on the left of the turret. Once the FastPass system ever gets implemented, you will enter through the right, which leads you in front of the waterfalls and right into the briefing area holding room.

In a makeshift briefing room, Rey – a hero of the cause – appears via holo-transmission alongside dutiful droid BB-8 to welcome the new Resistance recruits. She shares a plan to reunite with General Leia Organa at an off-planet location that must be kept secret from the First Order.

The attraction introduces a new featured character: Lieutenant Bek is a Mon Calamari Resistance officer who helps guide the Resistance recruits through their harrowing journey.

Editor’s Note: Fan-Favorite Nien Nunb and daring Resistance Pilot Poe Dameron are also along for the ride and introduced here.

Guests then board a nearby Intersystem Transport Ship (I-TS) and have to make their rendezvous quickly to avoid a First Order Star Destroyer on its way to Batuu. They should have a bad feeling about this.

Poe Dameron’s X-Wing is one of several vehicles from the Star Wars galaxy appearing in the attraction.

Star Wars: Rise of the Resistance throws out the rulebook for a traditional attraction design, eschewing and/or blending industry notions such as a “queue,” “preshow” and “ride” to create a seamless, holistic experience full of rich details and breathtaking excitement on a cinematic scale.

When guests board the I-TS, they’ll feel as if they’re lifting off the surface of Batuu and blasting into space alongside Poe Dameron in his signature black-painted X-Wing strarfighter, Black One.

Before the I-TS can make the jump to light speed, it’s caught in the tractor beam of a Star Destroyer and pulled into a massive hangar bay.

The attraction features grand set pieces – including the hangar bar that is filled with 50 menacing stormtroopers and a docked TIE Fighter. At various points, guests dodge blaster bolts from stormtroopers and AT-AT walkers, scurry past huge turbolaser cannons, and stumble into the Star Destroyer’s bridge.

Disney cast members adopt personalities of First Order and Resistance troops throughout the attraction to further deepen the immersive experience for guests.

Through their journey, guests are hunted by Kylo Ren, who uses the Force in an attempt to pry from their minds the location of General Organa’s secret base. Guests feel Ren’s tremendous malevolent power as they narrowly avoid his attacks.

Editor’s Note: There are two routes evading the AT-AT. The first one sees the front of the walker.

Editor’s Note: The second route comes to the side of the AT-AT walker. Both versions show Finn in Stormtrooper disguise.

Actors from the current Star Wars film trilogy reprise their roles for new scenes and dialogue in Star Wars: Rise of the Resistance, including Daisy Ridley (Rey), Adam Driver (Kylo Ren), John Boyega (Finn), Oscar Isaac (Poe Dameron), and Domnhall Gleeson (General Hux). Many scenes were filmed at the same time “Star Wars: The Last Jedi” and “Star Wars: The Rise of Skywalker” were in production.

Walt Disney Imagineering combined multiple ride systems to tell the story of Star Wars: Rise of the Resistance. In one sequence, a new simulator experience gives the sensation of falling from space to crash land on Batuu.

The trackless ride vehicles in Star Wars: Rise of the Resistance are some of the most advanced ever used in a Disney attraction, with a sleek, low profile and the ability to move in all directions.

Disney A-1000 Audio-Animatronics figures appearing in the attraction provide a deep level of immersive storytelling through their lifelike and dynamic movements.

And there you have it! Completing the ride, it does beg the question that many were asking following the end of The Rise of Skywalker: WHERE’S NIEN NUNB?? He certainly made it through this to appear in The Last Jedi and The Rise of Skywalker, but maybe that’s a question…. for another time.