Review: The Rise of Skywalker is a Bittersweet Mixed Bag of Emotions and Convenience

(LIGHT SPOILERS AHEAD) There was no easy way to do this. But maybe there was. The end-all of the Skywalker Saga is looking to be a contender for one of the most talked about Star Wars movies for a long time to come. While The Last Jedi was universally praised by critics (and dismissed by fans), the same amount of praise is not being awarded to The Rise of Skywalker. But alternatively, the fanbase at large, will probably love the final act that is Episode 9. For me, I fall somewhere in between. It’s very much a mixed bag filled with few genuine surprises and a lot of all-too-familiar story elements. It’s a hard thing to juggle, putting an end to the story that George Lucas began forty-two years ago, but Director JJ Abrams and Co-Writer Chris Terrio swung for the fences, and you can’t fault them for trying. It’s clear they had the best of intentions, but they had perhaps created a movie bigger than it needed to be.

The good in The Rise of Skywalker, and there is plenty that is good, are the emotional beats. The young, brash new characters have been through a lot over the course of three films, none more so than in Ep9, and to see their arcs resolved is hugely satisfying. The return of some of the legacy characters such as Billy Dee Williams’ Lando Calrissian is a huge reminder, though, of what we missed out on by not letting them have more screen time sooner. In short, he’s absolutely refreshing. What’s left of Carrie Fisher’s scenes reversed engineered into The Rise of Skywalker, however moving, leaves something to be desired. One has to wonder if there was anything from The Last Jedi that could be used to pad her scenes a bit more.

The story isn’t that much different than Return of the Jedi, which might make some older fans wonder why we even bothered at all to falsify the happy ending that followed Episode 6 in the first place. Of course Palpatine (Ian McDiarmid) is back (from the dead) and he’s up to his old sith tricks. Different this go round is he commands an impressive fleet dubbed The Final Order. The fleet is so massive though, with each Star Destroyer mounted with a Death Star capable weapon, it becomes hard to believe, even for a Star Wars movie. You can guess what follows: Lightsaber battles, space battles, and a variation of a ground battle. Can our Resistance fighters face the impossible odds? No coin flip necessary for that answer.

As entertaining as this film is, as likable as the characters are, as beautiful as it all looks, there’s a reason for the near-unanimous dislike from the critics. The movie is a series of cheats, one that leads to another. Nothing is really earned, but free-passes are literally provided or given by pure chance or luck. And our characters seem to get one every time. For an end-all film, there are no lasting stakes and losses. Not even Mark Hamill is challenged here, which is ironic since he was so great in a role he wasn’t pleased with in the last go-round.

For the action, there is a lot and everything is visually stunning, but unfortunately there’s a readability in old Star Wars movies that is severely lacking here. What really made Return of the Jedi amazing, for example, were the amazing set-pieces and the clear look at everything that was created. The B-Wing Fighter was finally brought back from the grave but never given a hero moment in this film. The Knights of Ren were completely void of any character or presence, another wasted opportunity. One started to wish Captain Phasma came back from the dead instead. Guards near Palpatine don’t even get the proper screen time to see what they look like (we’ll need to buy the Visual Dictionary for that I suppose). The Ghost from Star Wars Rebels finally gets an on-screen cameo but doesn’t go beyond that. The shout out to General Syndulla in Rogue One remains the only mention of her in the films, which is a genuine shame. The list of things we wanted to see but didn’t get go on and on, and I didn’t even bring up fan-favorite Wedge Antilles yet. Sigh, we needed more of him too.

The Rise of Skywalker clocks in at 2 hours and 35 minutes, which is a LOT of movie and moves pretty briskly despite a very jumpy start that doesn’t even let us breathe. And due to the plot of the film surrounding a zombie Sith lord and some new uses of The Force, this is a Star Wars unlike any other, crossing closer into Harry Potter territory than I would have preferred. But a moving and entertaining movie it is, so for that, JJ Abrams and Chris Terrio succeeded. Does it make me excited to purchase any toys? Sadly it doesn’t, which is something even the prequels excelled at.

Where Star Wars goes from here is anyone’s guess. Until anything else is announced, all we have is The Mandalorian and the upcoming Kenobi and Cassian Andor series for Disney+. I can’t help but wonder, what if they went with George Lucas’ treatment all along?

Star Wars: The Rise of Skywalker is now playing in theaters everywhere.

The Rise of Skywalker: Photos From the World Premiere 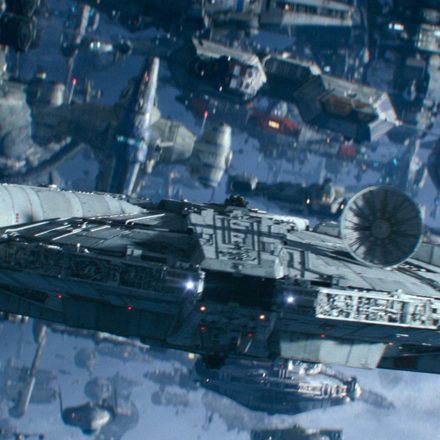 Episode IX - The Rise of Skywalker 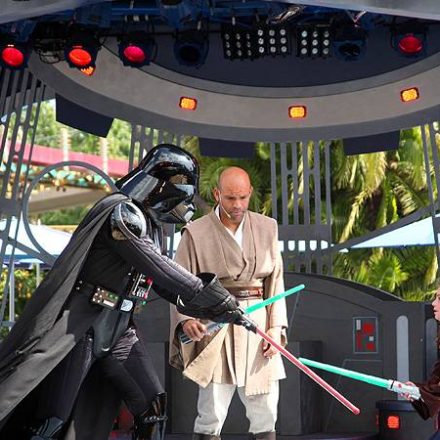 September 12, 2012 David Yeh
The Jedi Training Academy, a popular show at Star Wars Weekends has been entertaining guests at Disneyland since October 2006 and regularly at...