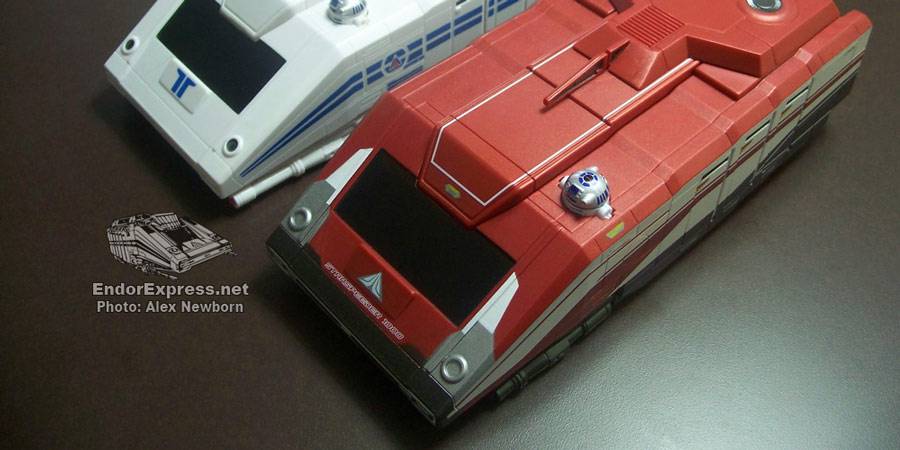 Booth 441 at CV was the place to find all of the convention-exclusive Disney merchandise, like the Last Tour to Endor t-shirt and pin, the Shadow Trooper Donald Duck action figure, and the Sneak Preview StarSpeeder 1000 vehicle.

I took along my StarSpeeder 3000 and shot some comparison pics back at the hotel.

For the most part, the toy appears to be a simple re-deco of the existing sculpt.

But there are subtle differences in the molds…

The half-row of seats up front has been replaced with a full row, and no space has been left for a pilot figure like the RX-24 of the original. 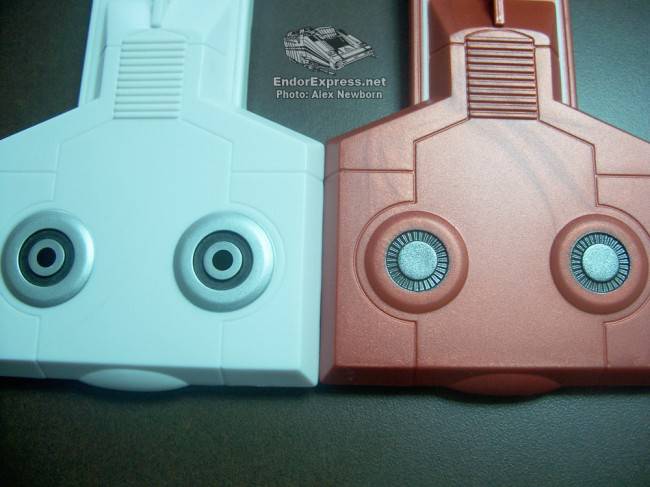 More detail has been added inside the two rooftop vents, giving them a more turbine-like appearance.

And the forward laser cannons are significantly shorter, a design change reflected not only in each portrayal of the SS1K, like the playset and the 1/64 diecast toy, but the newly-revealed ‘competitor’ starspeeders as well.

According to Disney Merchandising’s Brad Schoeneberg, this will be the only time that the SS1K will be sold using this mold. And they worked closely with the Imagineers who are developing “Star Tours: The Adventures Continue” about what details they could reveal in this sneak preview item.

Among those, the revelation that the voice heard when pressing the buttons of the SS1K is that of a new ‘spokesdroid’, but no additional information was forthcoming.

The Spokesdroid says: “Star Tours is proud to introduce the StarSpeeder 1000.”

Now, it has come to my attention that some folks are theorizing that the voice heard in the toy belongs to Carrie Fisher. I guess it’s understandable, since she was in attendance at CV, and must’ve been on their minds, but to be frank, I think their hearing is colored by a big dose of fan-wishing.

It sounds nothing like Carrie’s rather smoky voice of present-day. In fact, when Carrie reprised the role of Princess Leia for Robot Chicken, I thought it was poor casting until I saw the documentaries revealing who it was, because the voice sounded so much more mature and weathered.

(But perhaps the whole thing just hits too close to the previous Star Tours cameo-voice rumor from a few years ago, where I had fans assuring me that they could ‘just tell’ that Mark Hamill was the uncredited speaker of “You droids on Transport 22, get back to work!” Ever the skeptic, I took that one all the way to Star Tours’ writer Tom Fitzgerald when conducting interviews for my Insider article, and was told the line was spoken by one of the other Imagineers.)

Back to the Spokesdroid, in my opinion, she actually sounds remarkably like actress Katey Sagal. You know, Peg Bundy? Leela from Futurama? (And her sister Liz was Ronette in Howard the Duck, but that’s neither here nor there.)

But I’ve as much corroboration for that as anyone else has for Carrie Fisher.

All in all, a pretty cool toy, and a nice bookend for the old blue-and-white version.

Alex Newborn
Alex is a lifelong fan of the Star Wars movies and everything Disney, so his obsession with Star Tours comes as no surprise. Born in 1970, Alex visited Walt Disney World for the first time in 1975, and saw the original Star Wars film in its first theatrical run in 1977. He returned to Disney in the 80’s and the 90’s… riding STAR TOURS (twice!) on one fateful day in 1991. He has yet to visit Disney in the new millennium, waiting for both his children to be the required 40″ tall to ride STAR TOURS. “What I’d really like to see is a Tour chartered for the planet New Bornalex,” says Alex with a smile. The planet, mentioned first in Cloak of Deception, is a Tuckerization of Alex’s name, an honor bestowed on him in print by author Jim Luceno. Alex is currently at work on a partial realisation of his childhood Disney-in-miniature wish– he is constructing a hyper-accurate 1:18 scale Star Tours diorama to showcase his collection of park-exclusive action figures. In the meantime, Alex is always on the lookout for more STAR TOURS video or audio files, and other STAR TOURS memoribilia. Alex also is our site’s researcher, and comes with never seen before goodies, for your entertainment. Give him a round of applause guys.
Read more from Alex Newborn
Tags: Starspeeder 1000, Starspeeder 3000
Loading Comments...