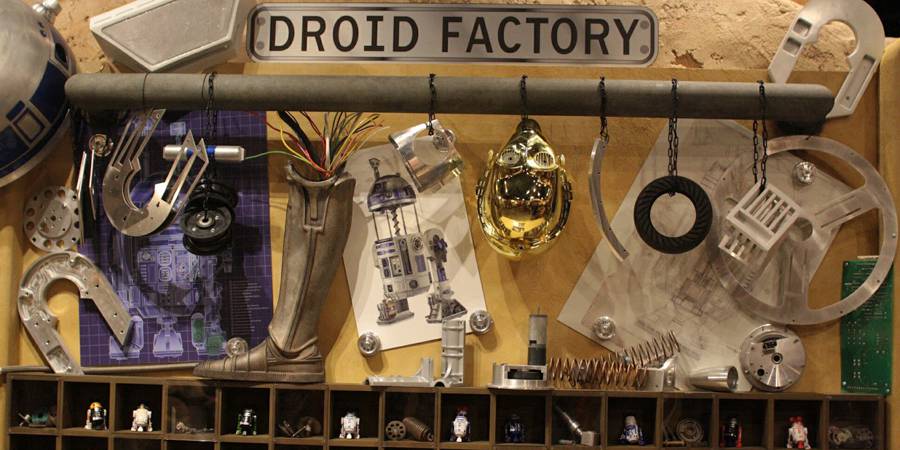 Droid Factory made it’s debut at Disney Hollywood Studios this weekend and the folks from Disney Theme Park Merchandise were kind enough to answer some of the questions we have been asked to forward to them.

Several folks are asking will Disneyland/Star Trader be getting these?

** Not at this time, but if it is successful we may look to add in the future

Can guests order these over the phone? mail order?

** Unfortunately, no.  It is like our other bulk programs like Mr. Potato Head and Build Your Own Lightsaber.  It is an on-site experience where the guest is in control of the customization.

Will the Droid Factory continue past Star Wars Weekends?

Any additional information we can pass along?

** Come on out during Star Wars Weekends and build some droids.  We used reference on some of the droids seen in Star Tours to create our color combinations offerings.   Guests can now build some of the R-series droids that we haven’t previously released as action figures.

Thanks to the Disney Theme Park Merchandise team for taking the time to answer questions for us.

Kevin Yee posted a report on Ultimate Orlando Blog and we used his image for this report.

Rebelscum posted a report and photos this morning.

Galactic Hunter also has a report and images posted.

Brian Curran
A Star Wars Fan since 1977 when he was just 2. Brian grew up in California where his family would often make trips to Disneyland. In 1987 he took his first “Trip to Endor” and doesn’t pass on a chance to go back! He also enjoys going to Conventions and meeting the actors from the Star Wars films.
Read more from Brian Curran
Tags: Star Wars Weekends, Disney Hollywood Studios, Disney Theme Park Merchandise, Build A Droid, Droid Factory, Hasbro