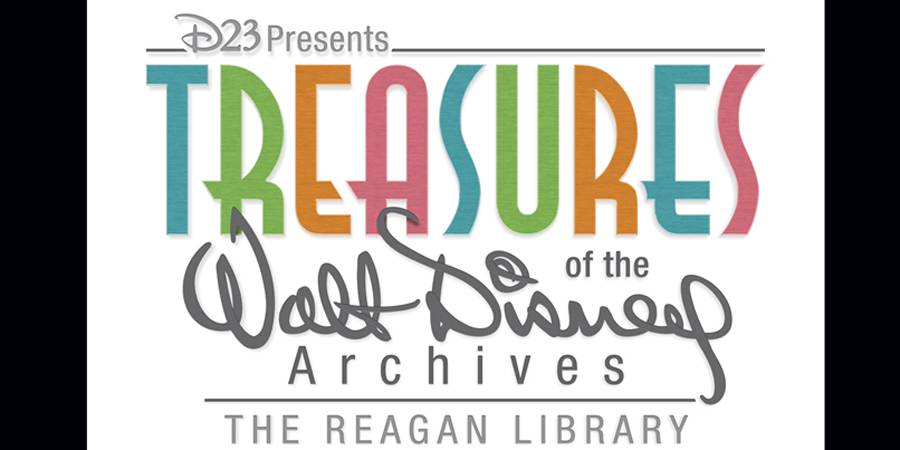 Tickets for the  upcoming “D23 Presents Treasures of the Walt Disney Archives” exhibit at the Ronald Reagan Library will be available for advance purchase beginning June 26.

D23: The Official Disney Fan Club Makes Final Preparations
As Hundreds of Never-Before-Seen Disney Artifacts Are Put Into Place
for the Official Opening on July 6

BURBANK and SIMI VALLEY, Calif. – (June 18, 2012) – Beginning June 26, 2012, tickets will be available for the largest Disney archives exhibit ever – D23 PRESENTS TREASURES OF THE WALT DISNEY ARCHIVES. From early drawings Walt Disney made for his mother, to ride vehicles from Disneyland and Captain America’s “ready room” from Marvel’s The Avengers, hundreds of items from nearly 100 years of Disney history are making their way to the Ronald Reagan Presidential Library & Museum as D23, the official Disney fan club, readies the biggest Disney exhibit ever created.

Showcasing the boundless creativity and unbridled imagination that helped define 20th century entertainment, the 12,000-square-foot exhibit – for which the Reagan Library has constructed an entirely new exhibition space – opens July 6 and continues through April 2013.

More than 500 items have already been transported from the Walt Disney Archives in Burbank, Calif., to the Reagan Library – 30 miles north in Simi Valley – by the exhibit’s Official Logistics Sponsor, UPS, which is “moving the magic” for the planned nine-month run of D23 PRESENTS TREASURES OF THE WALT DISNEY ARCHIVES.

Many of the items have never left the Walt Disney Archives and are being publicly displayed for the very first time. Artifacts on exhibit will include:

Additionally, D23 PRESENTS TREASURES OF THE WALT DISNEY ARCHIVES features an entire section devoted to items that celebrate the connection between Walt Disney and Ronald Reagan. Photos, letters – including a hand-written draft of a letter from Reagan to the U.S. Postmaster General urging the creation of a special Walt Disney stamp – and an assortment of archival items underscore the close personal and professional relationship between the two men, and Reagan’s commitment to honoring Walt Disney’s legacy.

The exhibit opens to the public July 6, following a special preview only for D23 Members and their guests on Saturday, June 30. D23 Members can get tickets to this special preview online at www.D23.com, where more information can be found about the exhibit.  They will also be able to purchase tickets one day earlier than the general public (beginning June 25).

D23 PRESENTS TREASURES OF THE WALT DISNEY ARCHIVES will be open every day of the year, except Thanksgiving, Christmas and New Year’s Day, during regular Reagan Library operating hours. Entry to the exhibit is included in the price of regular admission to the Reagan Library, and tickets can be purchased online at www.ReaganLibrary.com/Tickets or at the Reagan Library box office. D23 Members receive a special discount on tickets to the museum, and, along with members of the Reagan Foundation, can visit the exhibit 30 minutes prior to its public opening each day.

D23: The Official Disney Fan Club celebrates the remarkable past, present, and future of Disney, taking its name from 1923, the year Walt Disney founded his world-famous company. D23 unlocks the magic of Disney with a host of exclusive benefits, including a quarterly publication, Disney twenty-three, a rich website at www.disney.com/D23, a weekly e-mail newsletter; an array of discounts and special offers; free gifts throughout the year; as well as exclusive events created especially for its members.

Disney fans can join the world’s only Official Disney Fan Club by visiting www.Disney.com/D23, or at select shops at the Disneyland Resort, the Walt Disney World Resort and www.DisneyStore.com/D23. To keep up with all the latest D23 news and events, follow “DisneyD23” on Twitter, YouTube and Facebook.

About The Ronald Reagan Presidential Foundation and Library

The Ronald Reagan Presidential Foundation is a non-profit, non-partisan organization dedicated to the preservation and promotion of Ronald Reagan’s legacy of individual liberty, economic opportunity, global democracy, and national pride. It sustains the Ronald Reagan Presidential Library and Museum, the Center for Public Affairs, the Presidential Learning Center and The Air Force One Pavilion. Located in Simi Valley, Calif., the Library houses over 55 million pages of Gubernatorial, Presidential and personal papers and more than 60,000 gifts and artifacts chronicling the lives of Ronald and Nancy Reagan. It now also serves as the final resting place of America’s 40th President. www.reaganfoundation.org, www.reaganlibrary.com.

Brian Curran
A Star Wars Fan since 1977 when he was just 2. Brian grew up in California where his family would often make trips to Disneyland. In 1987 he took his first “Trip to Endor” and doesn’t pass on a chance to go back! He also enjoys going to Conventions and meeting the actors from the Star Wars films.
Read more from Brian Curran
Tags: Black Pearl, Julie Andrews, Mary Poppins, Tron Legacy, Tim Burton, Pirates of the Caribbean, Walt Disney, Captain America, Fantasmic!, Oswald the Lucky Rabbit
Loading Comments...