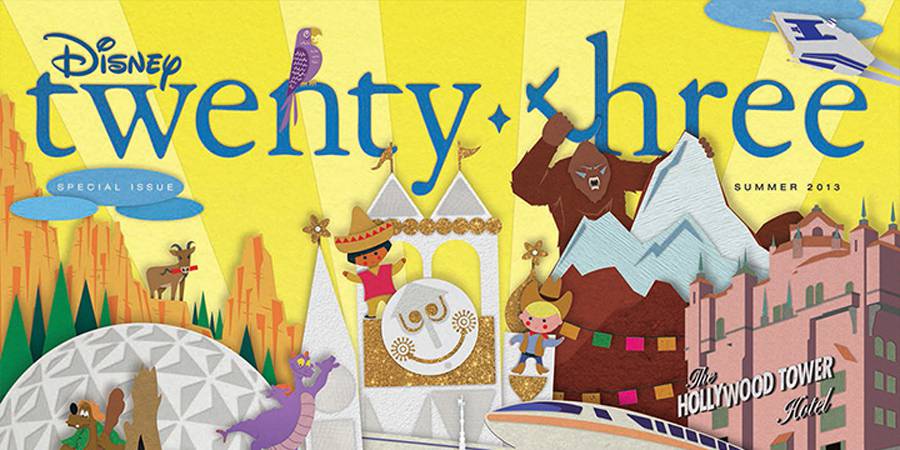 STARRING THE LONE RANGER, RIDES INTO HOMES MAY 14

Plus an Extensive Feature Saluting 60 Years of Walt Disney Imagineering

BURBANK, Calif. – April 29, 2013 – The summer issue of Disney twenty-three, the flagship magazine of D23: The Official Disney Fan Club, features a mega summer movie preview of Disney’s upcoming theatrical releases. D23 gets readers back in the saddle with filmmakers Jerry Bruckheimer and Gore Verbinski for Johnny Depp’s upcoming The Lone Ranger; Billy Crystal talks about scaring up big laughs for Monsters University; the masterminds behind Marvel’s newest film, Iron Man 3, offer an inside look at how they’re bringing Iron Man back to basics; and John Lasseter shows us how the upcoming animated film Disney’s Planes will soar.

Disney twenty-three also celebrates 60 years of Walt Disney Imagineering with a special commemorative back cover. Imagineer Tony Baxter discusses his work on some of the world’s most iconic attractions, including Big Thunder Mountain Railroad, Splash Mountain, and Star Tours. “You Do What?” profiles some of the most unusual jobs Imagineers have had over the years, from rock designer to castle architect. “Imagineering Fact? Or Fiction!” debunks some of the long-time myths and legends of the Disney Parks. And there’s much more, including “23 Imagineering Game Changers” and a salute from Chairman of Walt Disney Parks and Resorts Tom Staggs to the thousands of creative individuals whose contributions have changed the way guests experience Disney around the world.

Beginning with the summer issue, Disney twenty-three, hailed by critics for its superlative fan content and collectability, will be offered exclusively to D23 Gold Members who will continue to receive the magazine as a benefit of their membership. Disney twenty-three is delivered directly to fans’ doorsteps, and this issue contains a special member gift—a metallic D23 keychain, signifying how members hold the key to unlocking the magic of Disney through D23.

Disney twenty-three’s favorite sections are back with new images and content, too. In this issue:

The Disney discoveries don’t stop with the end of the summer publication. In conjunction with the summer issue of Disney twenty-three, www.D23.com will feature original and exclusive stories that complement the contents of D23’s glossy magazine. Beginning May 14, only on D23.com you’ll find an exclusive video interview with Imagineer Tony Baxter.

D23: The Official Disney Fan Club celebrates the remarkable past, present, and future of Disney, taking its name from 1923, the year Walt Disney founded his world-famous company. D23 brings its members a host of exclusive benefits, including a weekly e-mail newsletter; an array of discounts and special offers; and exclusive, member-only special events.

Brian Curran
A Star Wars Fan since 1977 when he was just 2. Brian grew up in California where his family would often make trips to Disneyland. In 1987 he took his first “Trip to Endor” and doesn’t pass on a chance to go back! He also enjoys going to Conventions and meeting the actors from the Star Wars films.
Read more from Brian Curran
Tags: Tony Baxter
Loading Comments...