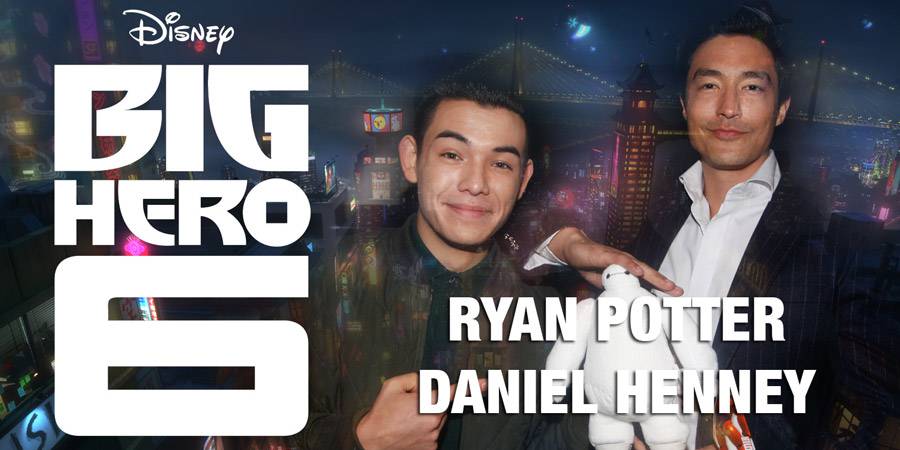 Walt Disney Animation Studios’ ‘Big Hero 6’ follows on the success of last year’s Oscar-winning ‘Frozen’, about two sisters who struggle with sibling-love. The stars, Ryan Potter (Hiro) and Daniel Henney (Tadashi), play brothers who already have that support system and bond in place, but the real game changer here is that they’re Asian-American actors playing Asian-American characters, which is a first for Disney (Lilo & Stitch might count but certainly leaning more heavily as Pacific Islander). The setting is a fictional metropolis called San Fransokyo, a city with a layout of San Francisco but with a design sense of Tokyo, Japan.

Inspired by the Marvel Comic of the same name, “Big Hero 6”, winner of the Oscar for Best Animated Feature film will be released on DVD and Blu-Ray on Tuesday, February 24.  We caught up with Ryan and Daniel and talked about the film and life in general.

EndorExpress: Big Hero 6… it’s a movie you both have probably been talking about for a while now…

Daniel Henney: (sarcastic) No, we haven’t talked about that movie have we? Big Hero 6?

Ryan Potter: No, we were just talking about your hair the whole time [laughs].

EndorExpress: First of all, this film is incredible. And I have to say this, it is one of the very few movies where my friends, my Asian female friends, they’re in love with Tadashi… I mean, they love Hiro too but..

[Ryan pretends to leave the room]

Daniel: [laughing] (at Ryan) Ooh, why don’t you get out of the room now!

EndorExpress: …and they’re crying their heads off because of your character and it’s kind of amazing because this movie is reaching a different audience that has been ignored for so long.

Ryan: Yeah, it’s definitely one of the first projects I’ve seen in a while that can cater to EVERY body. It’s a very global piece.

Daniel: Yeah, you know Tadashi, he’s a timeless character. And that type of character hasn’t been seen before, you know, someone that looks like Tadashi, which is really great. He’s chivalrous, he’s selfless, he’s charismatic, intelligent, handsome, loving… he’s all of those things that women love – everyone loves. And it’s a character that people aspire to be. And then of course he sacrifices himself and dies, which is like, come on. So it’s beautiful that they finally took a shot with actors like Ryan and myself, with characters like Hiro and Tadashi. And it paid off! It’s a huge hit and so… it’s awesome.

EndorExpress: It really is… and it’s reaching a huge audience everywhere, not just in the States. Have you both been promoting the film as it comes out in different countries?

Daniel: I was in Korea. That was the only place I went.

EndorExpress: Did you guys record new dialogue for the other countries at all?

Daniel: Well, in Korea they’re so used to subtitles. They’ve been watching subtitled movies since forever, you know, so I think they had a dubbed version too where other actors did the dialogue, they called him Teddy in Korea.

Ryan: It was released in English??

Daniel: Yeah, it was my voice and your voice.

Daniel: Yeah, that’s what I’m saying! Why are our voices getting high?

Daniel: I offered to do Teddy in Korean but they had a voice actor do it.

Daniel: Like a guy who could actually speak the language better than me. I could have done it but it would have been a lot of work. 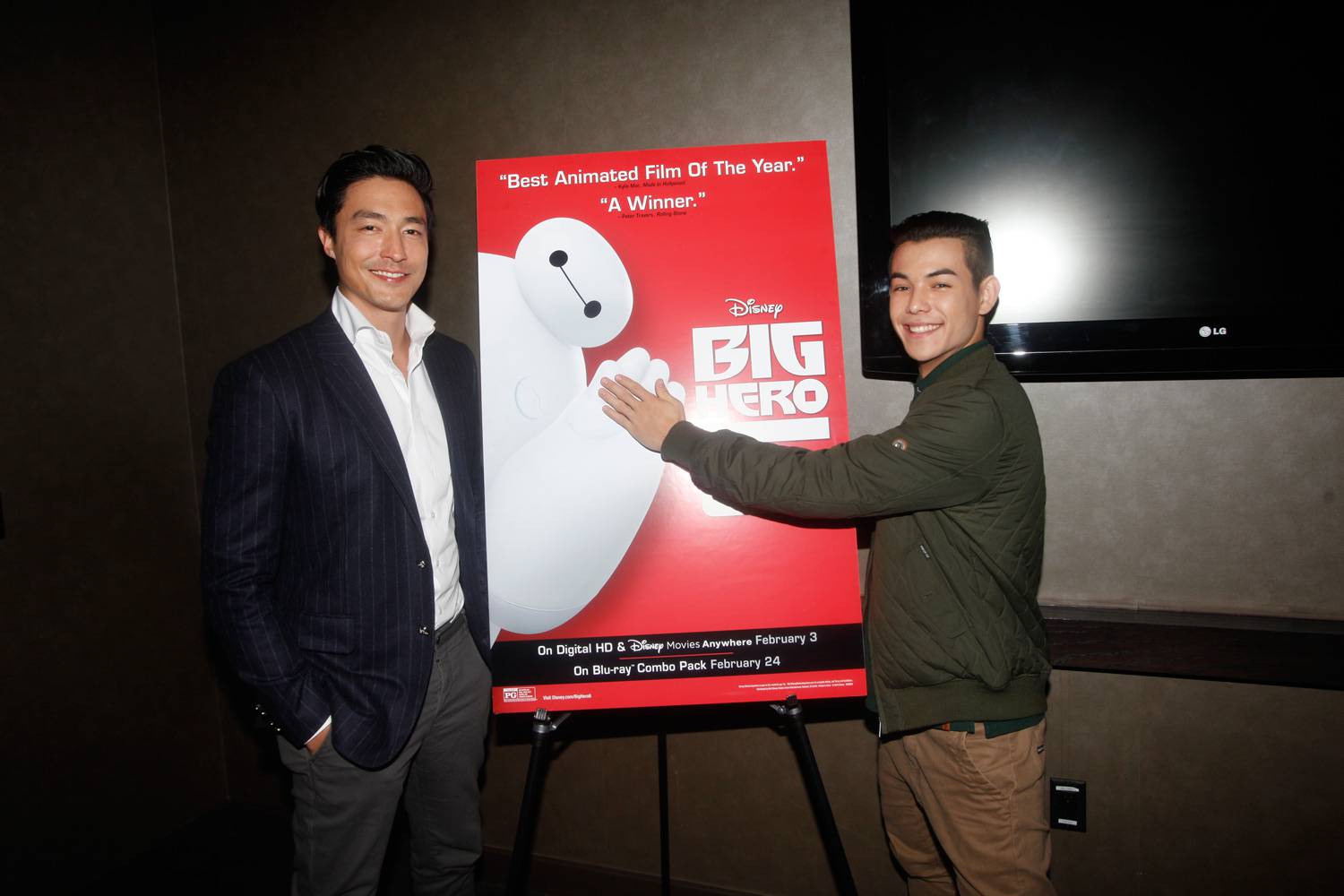 EndorExpress: Daniel, you grew up in Michigan. Did you grow up with people treating you differently?

Daniel: Yeah oh yeah yeah…. It was like… you’ve seen Fargo right? That’s like my hometown. We have one street with a post office, four gas stations and three churches. That’s my hometown. It’s all Caucasian, but you know, kids go through… every kid goes through something. That just happened to be my thing. But I wouldn’t trade it. It made me who I am and I’m able to work the way I do today because of my upbringing. So I’m proud of it but it wasn’t always easy.

EndorExpress: Ryan, coming from Japan into the states, how was that?

Ryan: It was definitely a culture shock, you know. The food was the biggest difference. I grew up on Japanese food and coming here to the States, I was not a fan of… of anything! I was literally eating at the same Japanese restaurants over and over again until I sort of started discovering cheeseburger or you know?  My taste palette branched out but it was definitely a big shock. There’s always some sort of racism or off-handed comments, whatever you want to call it… there’s always that, but luckily for me, every generation becomes more and more progressive and every year we become more and more colorblind. Everyone is so mixed now. No one can really say they really are one ethnicity.

Daniel: Depends on where you grow up too.

Daniel: And it’s really interesting for Ryan and I because we’re mixed. I’m half Korean and he’s half Japanese, it’s a weird thing facing racial issues like that because for me, my dad, I think my dad is whiter than everyone else’s.. and yet I’m getting that treatment, so it’s a really interesting paradox.

Ryan: Yeah, I really didn’t realize as a kid, comments would be made about whether I was Asian or White. And those comments never really landed on me because if you’re trying to insult me it’s not working. [laughs] If you can come up with a stereotype about half Japanese half Caucasians maybe you can get me.

Daniel: Come to my house and eat a cheeseburger and ramen.

EndorExpress: Get a ramen burger..

Ryan: Yeah, a ramen burger! Exactly! Have you had that?

EndorExpress: Being in a Disney film, you kind of become a part of the Disney family for life almost. Did either of you grow up as Disney Fans?

Ryan: I think everybody is a Disney fan. I think if someone hasn’t seen a Disney film I think it’s because they’re in a country where are no DVD players. I feel like every kid has seen at least one Disney animated film.

EndorExpress: Did you have a favorite growing up?

Daniel: My favorite growing up was Fox and the Hound. Something special about that movie I don’t know why. Two best friends, the farmer element, and you know, the fox and the hound can’t be friends… it’s just beautiful [pretends to cry].

EndorExpress: I kind of just want a pet fox after that movie.

Ryan: I love Peter Pan but my favorite is probably the most out there, is Treasure Planet. I absolutely love that movie. I keep telling people how this film [Big Hero 6] comes full circle for me, you know it’s San Francisco and Tokyo, I get to be myself… but the producer of this film, Roy Conli, produced my favorite Disney film Treasure Planet. It’s very surreal. All these little things about this project that are so personal to me.

Daniel: I love WALL-E too. There’s really something really special about WALL-E.

Daniel: Was it? Was it Pixar?

EndorExpress: We can talk about Star Wars now too!

Ryan: I’m waiting for the first Asian Jedi. How awesome would that be? We need an Asian Jedi.

EndorExpress: You should be the first one that has a speaking line, since there was one in Episode II.

Daniel: I went out for Star Wars, man.

EndorExpress: What?? Did you get it?

Daniel: No I didn’t. I tried out to go out for the main lead. I was fighting for it, went in three or four times, it’s such a hard audition. Really fun, but tough. Just cool to be in the room.

EndorExpress: There’ll be stand alone movies though so I hope you get something.

Daniel: Hopefully. I would like to be a Jedi though.. or a Sith Lord, that would be so cool.

Ryan: I want to be a Mandalorian so bad! That would be so cool.

EndorExpress: How about Disneyland? Either of you go back recently?

Daniel: I haven’t gone in a long time and then I went recently for the first time a couple of years ago. And I was like “I didn’t want to go” and I got there and walk through the gates and I just, you know.. your heart opens..

Daniel: Cut to me with a half eaten turkey leg, big smile on my face, “let’s ride the river boat!”, you know. I was just completely geeking out. You feel like a kid again. It’s amazing.

Big Hero 6 is out on DVD and Blu-Ray February 24th.
Photography by David Yeh.
Screenshots © Disney

David Yeh
A long time fan of both Disney and Star Wars, he has a hard time resisting the temptations of Disney’s merchandising force. If you see pictures of the toys and pins, you can bet they are from Dave, our resident collecting guru.
Read more from David Yeh
Tags: Ryan Potter, Daniel Henney
Loading Comments...