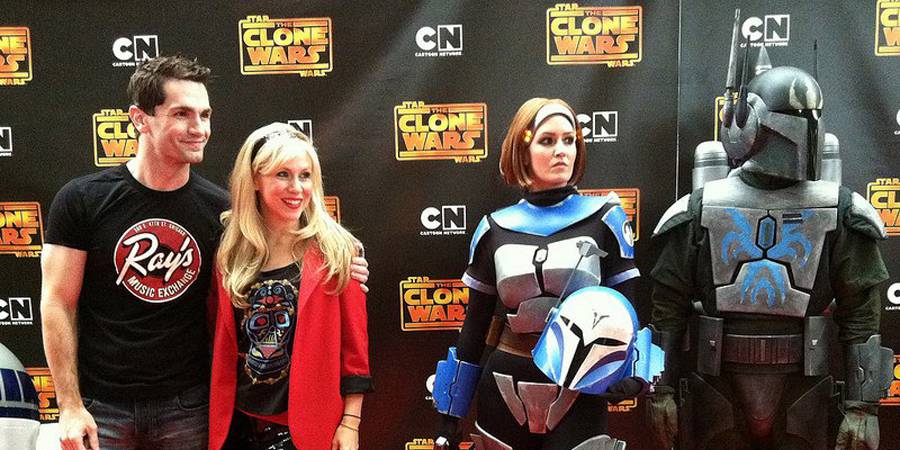 Ashley Eckstein, the voice of Ahsoka Tano in Star Wars: The Clone Wars & founder of Her Universe has released a 40 minute video on her experience at Star Wars Celebration VI. Ashley’s video diary is now posted on StarWars.com.

NEW YORK, NY – September 18th, 2012 – Ashley Eckstein, the voice of Ahsoka Tano on Star Wars™: The Clone Wars and founder of the popular female sci-fi merchandise line, Her Universe™, is giving fans an expanded and unprecedented look behind-the-scenes of herexperiences at the largest Star Wars event in the world, Celebration VI, which took place last month in Orlando, FL.  With a video camera following her everywhere for the four-day event, Eckstein gives fans a unique perspective, through her eyes, of this epic convention. With over 40 minutes of footage, Ashley’s Video Diary debuts via Starwars.com today at http://www.starwars.com/watch/celebration_vi_ashley_video_diary.html

Snippets of Eckstein’s video diary cam were posted online on the StarWars.com blog during Celebration VI last month. However, Eckstein decided to edit together one final video diary of the entire Star Wars event, utilizing over 20 minutes of material not seen earlier, to give fans who could not be at Celebration VI the experience of being there… and from a unique view.

“I’ve never been good at keeping a written diary and I wanted to capture the events and memories of Celebration VI for myself and the fans in a different way,” said Eckstein. “With social media being the way it is today, a video diary seemed like the best way to cover CVI.”

The video diary, directed by Jason Surrell, a screenwriter and Senior Show Writer for Walt Disney Imagineering and edited by Studio Say So, an Orlando-based video production company, is a collaborative effort with Eckstein. “I was absolutely thrilled when Ashley asked me to direct her video diary at Star Wars Celebration VI,” said Surrell.  “After directing Ashley and her fellow Clone Wars cast members in Behind the Force at Disney’s Star Wars Weekends for so many years, I knew that there’s a whole other world out there that people typically don’t get to see.  So I’m hoping that our series of video diaries will truly give Star Wars fans a peek behind the curtain at all the fascinating and truly funnythings that happen when these people get together. I’ve never been happier to be a fly on the wall.  We’re going to take you onstage, backstage and everywhere in between.”

The Celebration is Headed Back to Europe! www.StarWarsCelebration.eu

About Her Universe
Her Universe was launched in 2009 by actress and entrepreneur Ashley Eckstein, and her partner, The Araca Group, known as one of the most innovative theatrical production and merchandise companies in the world. Her Universe was created to directly address the expanding market of female fans by entering into its first agreement with Lucas Licensing to develop and produce a line of female-centered Star Warsapparel and accessories. The success of that line was followed up with a collection for the Syfy network including such shows as Battlestar Galactica and with BBC America for Doctor Who and with CBS Consumer Products for Star Trek. You can learn more about Her Universe and purchase the current line of fangirl apparel and accessories by going to www.heruniverse.com and by following Eckstein on Facebook(facebook.com/HerUniverse) and Twitter (twitter.com/HerUniverse).

About Jason Surrell
Jason Surrell is an author, filmmaker and Senior Show Writer for Walt Disney Imagineering. Jason is the author of The Haunted Mansion: From the Magic Kingdom to the Movies, The Art of The Haunted Mansion, Screenplay by Disney: Tips and Techniques to Bring Magic to Your Moviemaking, Pirates of the Caribbean: From the Magic Kingdom to the Movies,The Disney Mountains: Imagineering at Its Peak and The Art of Marvel’s The Avengers. He also wrote and directed a feature film, Characters, and wrote for Walt Disney Television’s “Secrets of the Animal Kingdom.” Jason is currently working on the screenplay for a supernatural thriller and developing a television series.

About Studio Say So
Studio Say So is an Orlando-based video production company working to tell stories for clients and partners. Founded in 2008 by Danny Miller and Marshall Head, Studio Say So has worked with clients ranging from Walt Disney Imagineering and Florida Hospital to Unicef. Studio Say So writes, shoots, edits and produces a variety of videos from documentaries to commercials. Visit http://www.studiosayso.comto see videos and learn more.

Ashley Eckstein, seen here with Ahsoka Tano, the Star Wars™: The Clone Wars character she voices, has a new 40 minute video diary posted on Starwars.com’s official blog following her adventures around the biggest Star Wars convention in the world this past August.
Photo Credit: Kelsey Edwards

Brian Curran
A Star Wars Fan since 1977 when he was just 2. Brian grew up in California where his family would often make trips to Disneyland. In 1987 he took his first “Trip to Endor” and doesn’t pass on a chance to go back! He also enjoys going to Conventions and meeting the actors from the Star Wars films.
Read more from Brian Curran
Tags: Jason Surrell, Ashley Eckstein, Her Universe
Loading Comments...