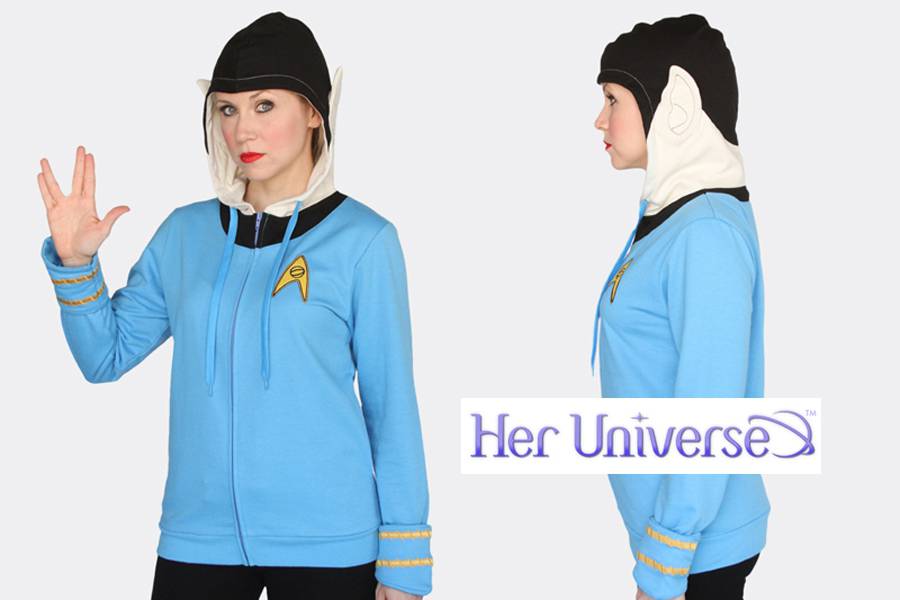 Ashley Eckstein, the voice of Ahsoka Tano on Star Wars: The Clone Wars and founder of the female sci-fi apparel line, Her Universe™, just revealed her line of costume hoodies,
tops and a Hot Topic exclusive TARDIS dress dubbed “everyday cosplay” just in time for the Halloween season. Ashley will also be co-hosting MTV Geek’s coverage of New York Comic Con this week.

NEW YORK, NY – October 9th, 2012 – This Halloween, Geek Girls do not have to sacrifice fashion for a cheap costume they’ll wear only once. Actress Ashley Eckstein, the voice of Ahsoka Tano on Star Wars: The Clone Wars and founder of the female sci-fi apparel line, Her Universe™, revealed today her line of fashionable costume hoodies, tops and a Hot Topic exclusive TARDIS dress dubbed “everyday cosplay” just in time for the Halloween season. Whether you’re a fan of Star Wars, Star Trek or Doctor Who, Her Universe has you covered to be the stylish one this fall and all year long. And now, until October 22nd (for guaranteed 10/31 delivery), Her Universe (www.heruniverse.com) is offering FREE GROUND SHIPPING on any order of $50.00 or more.

“I have a tub full of Halloween costumes that I have spent a lot of money on which I’ve only worn once,” said Eckstein. “My goal for our ‘everyday cosplay’ line is for girls to be able to wear these fashionable costumed looks on Halloween and all year round! I’ve always been a savvy shopper and I try to get the most for my money.”

New to the “everyday cosplay” line from Her Universe is the Star Trek Spock zip-up hoodie featuring the famous original series blue uniform top where fangirls, with the hood up, can be their favorite Vulcan, complete with pointy ears. Also new this fall season is the Star Wars: The Clone Wars Ahsoka Tano adult tunic top which complements the already released Ahsoka tunic for young girls and the very popularPrincess Leia costume hoodie – perfect for any Halloween party or everyday wear. For female Whovians, Eckstein has collaborated with retailer Hot Topic to create Her Universe’s first fashionably-fun, stylized dress based on Doctor Who’s beloved time-traveling TARDIS – available online NOW at Hot Topic and at Hot Topic retail stores. And what better way to accessorize all of these pieces than with the new Her Universe Star Wars Halloween Tote Bag featuring all-new original art by renowned artist Katie Cook – perfect for fans of any age for school, work, shopping and, of course, trick or treating! Katie’s very popular Her Universe Halloween Tote Bag sold out last year at record speed! The bags are only available for a limited time, so get them while supplies last.

“I was thrilled when Ashley asked me to do another Halloween bag design,” said Katie. “I’ll take any chance I get to draw Darth Vader in a silly costume! Ashley and I came up with the idea for this year’s bag at Celebration a few weeks ago and I couldn’t wait to come home and get started on it.”

All of these “everyday cosplay” pieces for Halloween and beyond can be found on heruniverse.com with the Doctor Who TARDIS dress available NOW online at Hot Topic and Hot Topic retail stores. Eckstein can be seen wearing many of the “everyday cosplay” pieces as co-host for MTV Geek’s coverage (mtv.com/geek/) of New York Comic Con October 11th-14th.

About Her Universe
Her Universe was launched in 2009 by actress and entrepreneur Ashley Eckstein, and her partner, The Araca Group, known as one of the most innovative theatrical production and merchandise companies in the world. Her Universe was created to directly address the expanding market of female fans by entering into its first agreement with Lucas Licensing to develop and produce a line of female-centered Star Warsapparel and accessories. The success of that line was followed up with a collection for the Syfy network including such shows as Battlestar Galactica and with BBC America for Doctor Who and with CBS Consumer Products for Star Trek. You can learn more about Her Universe and purchase the current line of fangirl apparel and accessories by going to www.heruniverse.com and by following Eckstein on Facebook(facebook.com/HerUniverse) and Twitter (twitter.com/HerUniverse).

About Katie Cook
Katie Cook is an illustrator and writer that lives in Michigan. She has done work for Lucasfilm, The Jim Henson Company, Marvel Comics and more. Her websites are www.katiecandraw.com and www.gronkcomic.com

New in the “everyday cosplay” line from Her Universe is this unique Star Trek Spock hoodie. With the hood up, fangirls can be their favorite Vulcan complete with pointy ears.

Due to the overwhelming demand for last year’s bag, Ashley Eckstein has teamed up with renowned artist Katie Cook to create a brand new Star Wars Halloween Tote bag for 2012. Featuring fun, original art of Darth Vader and his stormtroopers, this is a must-have accessory for Halloween! The bags are only available for a limited time, so get them while supplies last.

Turn this Star Trek top into a costume or style it as an everyday outfit and you can inspire others to Boldly Go where no one has gone before.

Brian Curran
A Star Wars Fan since 1977 when he was just 2. Brian grew up in California where his family would often make trips to Disneyland. In 1987 he took his first “Trip to Endor” and doesn’t pass on a chance to go back! He also enjoys going to Conventions and meeting the actors from the Star Wars films.
Read more from Brian Curran
Tags: Ashley Eckstein, Her Universe
Loading Comments...