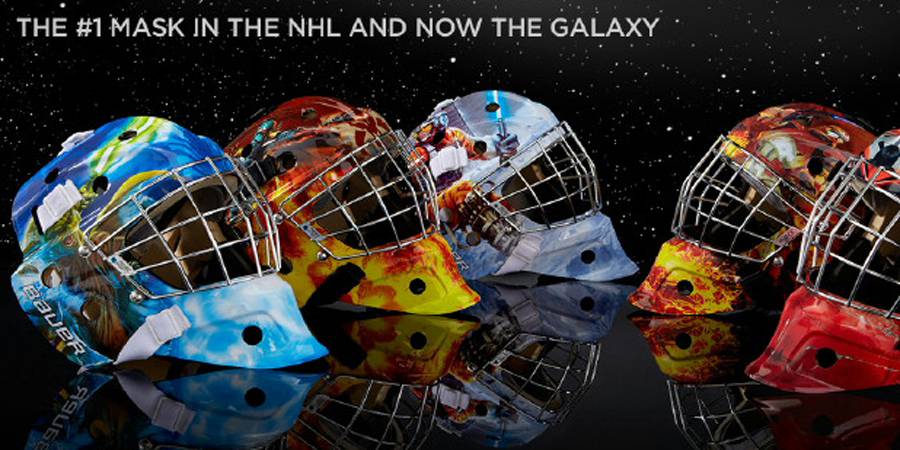 As a big fan of NHL hockey, I wish these were around… A Long Time Ago! Very cool!

BAUER Masks Now Available at Select Retailers throughout the World.

“For as long as goal masks have been worn in hockey, there has been an evolution of incredible artwork that showcases the goalie and the team’s heritage and provides inspiration in preparation for battle on the ice,” said Greg Goyer, Category General Manager for Goalie Product at Bauer Hockey.  “Given the film’s unique and global following, we’re excited to offer the series of Star Wars themed goal masks as the next chapter in the history of goal mask battle paint.”

Included below are brief descriptions of the artwork, scenes and characters featured on the goal masks:

LUKE SKYWALKER Goal Mask: With designs from Star Wars Episode V: The Empire Strikes Back, this goal mask features X-Wing pilot Luke Skywalker equipped for battle on the ice planet of Hoth, the location of the Rebel Alliance base.

SHOCK TROOPERS Goal Mask: This goal mask features designs of the Galactic Empire ground force, the Shock Troopers, and brings to life the fiery volcanic world of Mustafar, the location of the legendary battle between Anakin Skywalker and Obi-Wan Kenobi.

YODA Goal Mask: Yoda, one of the most renowned and powerful Jedi Masters in Galactic history, is featured on this goal mask poised to duel, armed with his lightsaber while channeling the Force.

BOBA FETT Goal Mask: The notorious bounty hunter, Boba Fett, is featured on this goal mask in battle in his customized Mandalorian armor firing his blaster rifle and in-flight with his Z-6 jetpack engaged.  The Mandalorian symbol is displayed on the center of the mask, just above the wire facial cage.

DARTH VADER Goal Mask: The Emperor’s dark enforcer, Darth Vader, is featured on this goal mask in his infamous black armor and in battle with his lightsaber in hand.  The Galactic Empire Imperial symbol is displayed on the center of the mask, just above the wire facial cage.

The series is available on the BAUER NME3 goal mask.  This high performance mask includes a LEXAN EXL polycarbonate shell, a dual density liner and a carbon steel round wire cage.  The Star Wars series BAUER goal mask is available in a variety of sizes, including senior, junior, youth and street youth.

Bauer Hockey is the No. 1 brand used by athletes in the National Hockey League, including goal masks.

STAR WARS and related properties are trademarks and/or copyrights, in the United States and other countries, of Lucasfilm Ltd. and/or its affiliates. © & TM  Lucasfilm Ltd.

ABOUT BAUER HOCKEY
Bauer Hockey is the world’s most recognized designer, marketer and manufacturer of hockey equipment. Founded in Kitchener, Ontario in 1927, Bauer Hockey developed the first skate with a blade attached to a boot, forever changing the game of hockey. Since then, Bauer Hockey has continued to develop the most sought after products in the industry, including the widely successful SUPREME®, VAPOR® and NEXUS® lines of products. Bauer Performance Sports Ltd., the parent company of Bauer Hockey, is a publicly-traded company on the Toronto Stock Exchange whose affiliates market products under the BAUER, MISSION, MAVERIK, CASCADE, INARIA, COMBAT and EASTON brand names.    For more information, visit Bauer Hockey’s website at www.BAUER.com.

Brian Curran
A Star Wars Fan since 1977 when he was just 2. Brian grew up in California where his family would often make trips to Disneyland. In 1987 he took his first “Trip to Endor” and doesn’t pass on a chance to go back! He also enjoys going to Conventions and meeting the actors from the Star Wars films.
Read more from Brian Curran
Tags: Hockey
Loading Comments...