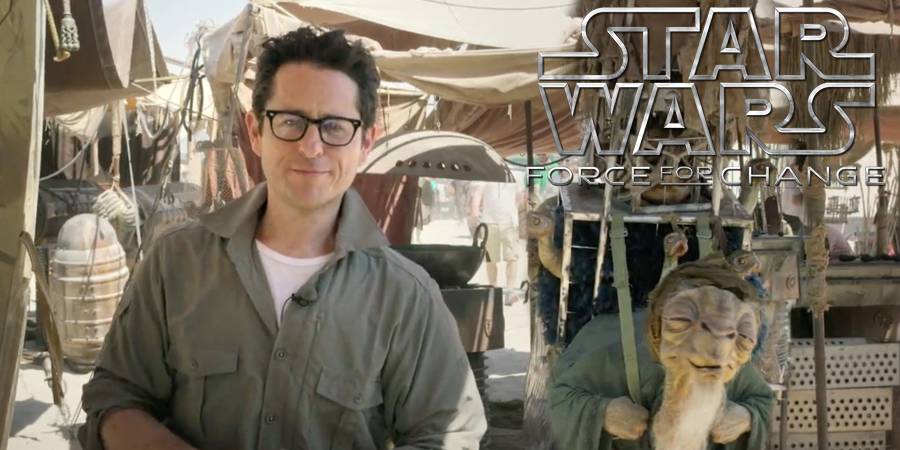 For Star Wars fans who haven’t yet taken part in STAR WARS: FORCE FOR CHANGE, it’s not too late! Along with a contribution of US $1 million from Disney, fans can contribute to raise funds and awareness for the United Nations Children’s Fund’s (UNICEF) Innovation Labs and its innovative programs that are benefitting the world’s most vulnerable children.

By contributing directly at Omaze.com/StarWars, fans can win a chance to appear in Star Wars: Episode VII that includes airfare and accommodations to London for one winner and a guest, Behind-the-scenes access on the closed set of Star Wars: Episode VII as a VIP guest of J.J. Abrams, the opportunity to meet members of the cast. Talk about a once in a lifetime opportunity!

This week, Star Wars: Force for Change has sent out the official Week One – Founding Member Badge featuring R2-D2 to those who have already contributed. They’ll offer a new digital badge for donors to collect by contributing throughout the initiative…. so maybe try not spending $50,000 all at once?

LOS ANGELES, CA, MAY 21, 2014 — Today in a special video message from the set of Star Wars: Episode VII, director J.J. Abrams announced the creation of Star Wars: Force for Change, a brand new Star Wars initiative from Disney and Lucasfilm in collaboration with Bad Robot dedicated to finding creative solutions to some of the world’s biggest problems. The first Star Wars: Force for Change campaign will raise funds and awareness for the United Nations Children’s Fund’s (UNICEF) Innovation Labs and its innovative programs that are benefitting the world’s most vulnerable children.

Disney has committed US $1 million to support the launch of Star Wars: Force for Change. Fans can now contribute directly at Omaze.com/StarWars for a chance to appear in Star Wars: Episode VII. For each $10 contribution made through the Omaze fundraising platform, eligible participants will be automatically entered for a chance to win this once-in-a-lifetime experience. The campaign runs from 12:01am PST on May 21stth until 11:59pm PST July 18th.

“The Star Wars fans are some of the most passionate and committed folks around the globe,” says director J.J. Abrams. “We’re thrilled to offer a chance to come behind the scenes as our VIP guests and be in Star Wars: Episode VII. We’re even more excited that by participating in this campaign, Star Wars fans will be helping children around the world through our collaboration with UNICEF Innovation Labs and projects.”

Star Wars continues to inspire generations of dreamers and doers to use their creativity to accomplish great things. Star Wars and Lucasfilm were built on the belief that in uniting creativity with innovation, you can make the impossible possible.

“The Star Wars films were made through George Lucas’s adventurous combination of technology and creativity,” says Kathleen Kennedy, president of Lucasfilm. “We wanted to honor and carry on that positive spirit as we start production on Episode VII and use Star Wars to make a difference in the world. Star Wars: Force for Change will help us do that, letting us give back to the fans who keep Star Warsalive, and raising much-needed funds for programs like UNICEF’s Innovation Labs.”

By pledging support for Star Wars: Force for Change, fans are helping UNICEF create a brighter tomorrow for kids and families around the world. Through its global network of Innovation Labs, UNICEF helps create sustainable solutions to major issues facing children in the areas of nutrition, water, health, and education. The Star Wars: Force for Change campaign will help fund innovative, life-changing projects in communities around the globe.

“UNICEF works in over 190 countries and territories  to help the world’s most vulnerable children and young people identify solutions and create change,” says Christopher Fabian, UNICEF Senior Advisor on Innovation and co-Lead of the Innovation Unit. “We work together with the greatest technologists and designers of our time to create open-source solutions that help millions of people. The support from Star Wars: Force for Change will help to bind these innovators together on a mission to solve the world’s most pressing problems, and create a better future.”

Visit StarWars.com/ForceForChange to learn more about this new charitable initiative and the work of UNICEF’s Innovation Labs and programs, and be sure to enter through contribution or free entry for your chance to win at Omaze.com/StarWars.

May the Force be with you!

The United Nations Children’s Fund (UNICEF) works in 190 countries and territories to save and improve children’s lives, providing health care and immunizations, clean water and sanitation, nutrition, education, emergency relief and more. The U.S. Fund for UNICEF supports UNICEF’s work through fundraising, advocacy, and education in the United States. Together, we are working toward the day when zero children die from preventable causes and every child has a safe and healthy childhood. For more information, visit www.unicefusa.org.  Find us on Twitter: @unicefusa; join us on Facebook: UNICEF-USA.

No purchase necessary to enter or win.  Void where prohibited.  Must be at least eighteen (18) years of age or the age of majority in your domicile, to enter and a resident of Argentina, Austria, Canada, Cyprus, Estonia, France, Germany, Greece, Hungary, India, Ireland, Japan, Latvia, Lithuania, Mexico, Netherlands, Philippines, Portugal, Romania, Russia, Slovakia, Slovenia, Spain, Sweden, USA, or the UK, and not a resident of Belgium, Italy, Malta, Singapore, or Thailand.  Residents of Australia, Brazil, China and the Republic of Korea are not prohibited from participating, but local rules and laws may restrict or prohibit the award of certain prizes or impose additional restrictions on participation.

Rewards are separate from sweepstakes prizes.  Rewards are limited in quantity. Odds of winning depend on number of entries. For free entry: (i) send post card to Sponsor at PO Box 3190, 1217 Wilshire Blvd., Santa Monica, California 90408 by applicable mail date; or (ii) visit www.Omaze.com/StarWars.  Entrants may receive additional entries via Facebook.  Maximum number of entries: 10,000 per Entrant.  Travel and accommodations are at Sponsor’s discretion and subject to availability and change.  Winner and Guest may be required to pass a background screening or security check, to receive the prize and/or reward. Visa conditions may apply. All taxes are Winner’s responsibility. Not sponsored, endorsed or administered by, or associated with Facebook®.  Residents of certain territories may be required to successfully complete a trivia question to qualify.  For full entry requirements, details, limitations and restrictions see Official rules at www.Omaze.com/StarWars.   Sole Sponsor: Omaze, Inc., PO Box 3190, 1217 Wilshire Blvd, Santa Monica, CA 90408.

David Yeh
A long time fan of both Disney and Star Wars, he has a hard time resisting the temptations of Disney’s merchandising force. If you see pictures of the toys and pins, you can bet they are from Dave, our resident collecting guru.
Read more from David Yeh
Tags: J.J. Abrams, Star Wars Episode 7, Star Wars: Force for Change, UNICEF
Loading Comments...