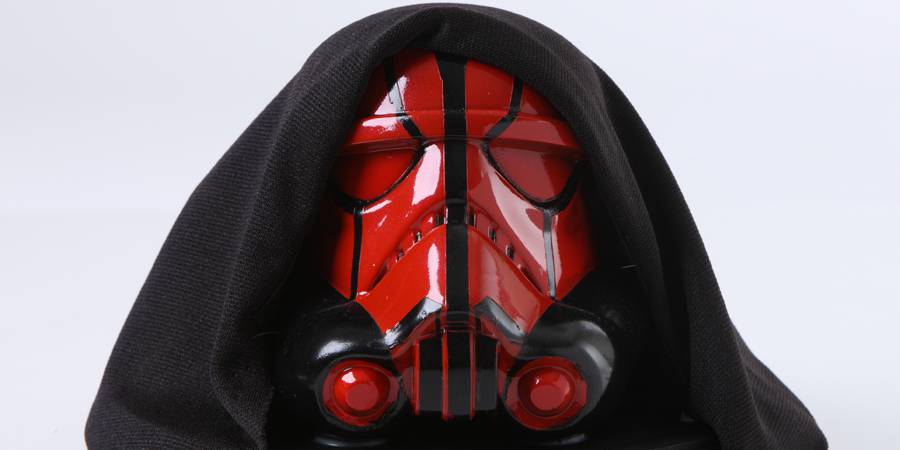 STAR WARS: FORCE FOR CHANGE announces online charity auction in support of UNICEF Kid Power. Iconic stormtrooper helmets decorated by artists from around the world up for bid on global Star Wars Day, May the 4th. Follow the link for more information.

SAN FRANCISCO, CA, MAY 4, 2015 — Star Wars: Force For Change, a charitable initiative from Disney and Lucasfilm, today announced its latest campaign, teaming with eBay Giving Works to auction off a selection of plasterstormtrooper helmet replicas uniquely decorated by artists around the world. The 10-day auction will kick off today and give bidders the chance to compete for these one-of-a-kind stormtrooper helmets at a starting price of $5.04.Lucasfilm has donated the helmets to U.S. Fund for UNICEF. U.S. Fund for UNICEF will receive 100% of the final auction sales price for each helmet and will direct these funds to support UNICEF Kid Power, an innovative new program that uses the world’s first Wearable-For-Good to get kids active and provide lifesaving food packets to children in need around the globe.

This auction comes on the heels of a very successful Force For Change interactive event at Star Wars Celebration Anaheim. During a globally-broadcast panel discussion about the new Star Wars: The Force Awakens movie to be released onDecember 18, 2015, director J.J. Abrams and producer Kathleen Kennedy discussed their latest collaboration with the humanitarian children’s organization in support of UNICEF Kid Power and why the relationship is so important to Star Wars: Force For Change.

“The Star Wars movies have always inspired a desire in people to help others, and we are extremely grateful that our fan community has been so generous with their time and efforts on behalf of the many charitable causes they support,” remarks Kathleen Kennedy, President of Lucasfilm Ltd. “Our hope is that Force For Change will harness that spirit of giving into a worldwide movement that uses the power and reach of Star Wars to help those around the world in need.”

“UNICEF Kid Power allows kids to become global forces for change with every step they take. The generous support from Disney and Lucasfilm along with the excitement generated by Star Wars fans will allow UNICEF to inspire even more kids to get active and save lives,” said Caryl M. Stern, President & CEO of the U.S. Fund for UNICEF. “May the Force for change be with you!”

While participating in the program, kids wear UNICEF Kid Power Bands, which measure their activity while they are moving. Physical activity unlocks Kid Power Points – the more they move, the more points they earn. Kid Power Points are converted to funding by partners, and funds are used by UNICEF to deliver lifesaving packets of therapeutic food to severely malnourished children.

To participate in the eBay stormtrooper Helmet Auction, go tohttp://www.ebay.com/forceforchange

Look out for more opportunities to participate in Star Wars: Force For Change throughout 2015. Go to www.StarWars.com/ForceForChange to learn more.

The United Nations Children’s Fund (UNICEF) works in more than 190 countries and territories to put children first. UNICEF has helped save more children’s lives than any other humanitarian organization, by providing health care and immunizations, clean water and sanitation, nutrition, education, emergency relief and more. The U.S. Fund for UNICEF supports UNICEF’s work through fundraising, advocacy and education in the United States. Together, we are working toward the day when no children die from preventable causes and every child has a safe and healthy childhood. For more information, visit www.unicefusa.org.

Brian Curran
A Star Wars Fan since 1977 when he was just 2. Brian grew up in California where his family would often make trips to Disneyland. In 1987 he took his first “Trip to Endor” and doesn’t pass on a chance to go back! He also enjoys going to Conventions and meeting the actors from the Star Wars films.
Read more from Brian Curran
Tags: Kathleen Kennedy, J.J. Abrams, Star Wars: Force for Change, UNICEF
Loading Comments...