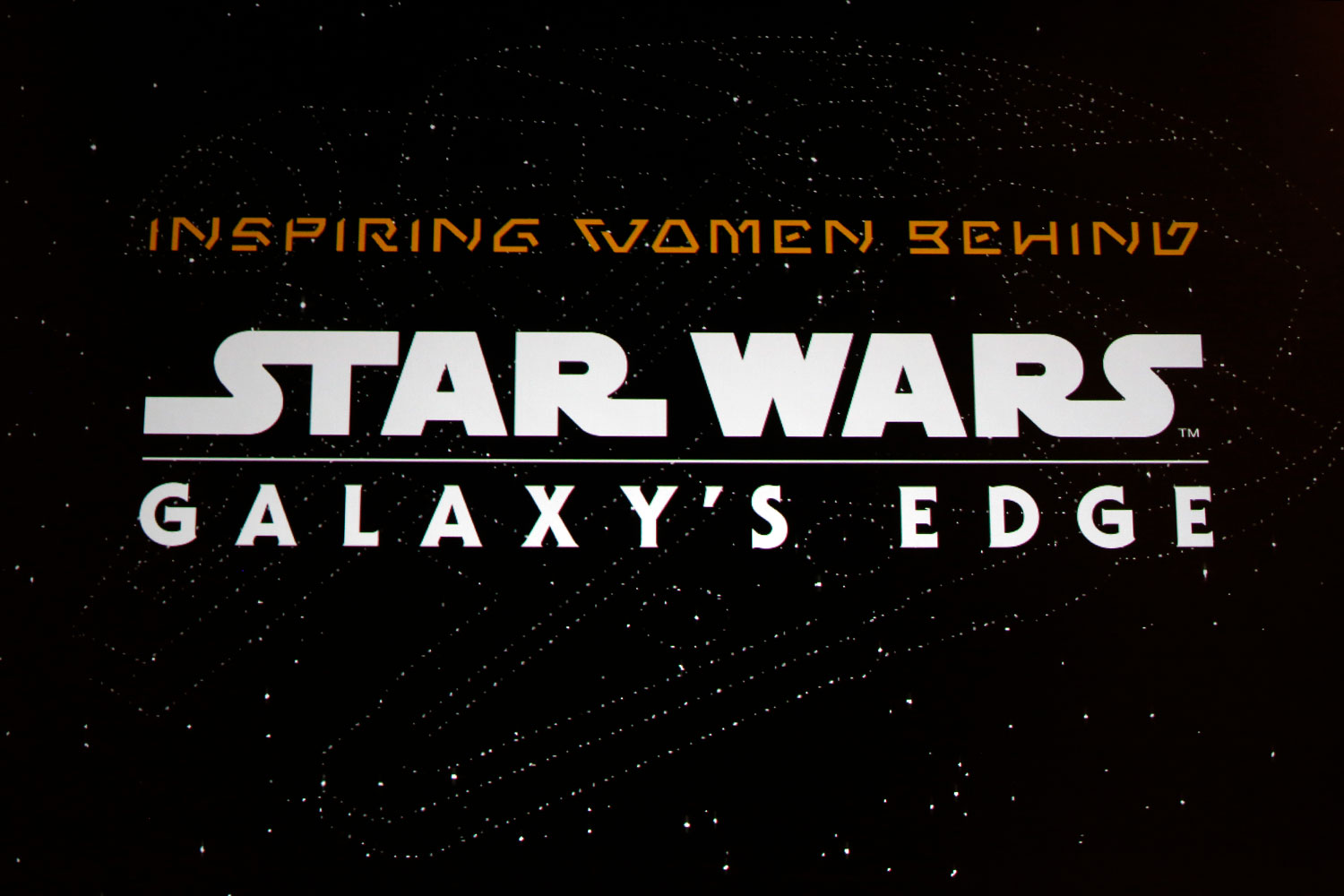 The description from D23 is as follows: Meet some of the talented women behind Star Wars: Galaxy’s Edge, and explore how they helped bring the galactic destination to life, from the planet’s original backstory to themed merchandise, galactic fare, and interactive elements to the land.

In the panel, we somewhat learn who were the true Star Wars fans from the beginning, and who were more into Star Trek. (we won’t tell).

We also learned something that many may already knew about Oga’s choice in boyfriend (it’s a wookiee). Anisha Deshmane gives us the cantina gossip:

“One of my favorite (backstories) is outside of the cantina. Oga Garra, who is our local crime boss and the proprietor of the cantina, she had a little dispute with her wookiee boyfriend. He was seen canoodling with a rodian somewhere in the cantina – a shootout ensued and he ran out of the door and up the stairs across the way, and you can actually see all the blaster marks up the wall because she’s trying to get him! And the railings come down and you can see all of that evidence in the architecture of the space. And that’s something I remember walking by the first time asking “why are there blaster marks there?” and Margaret (Kerrison) was all “well let me tell you…”.

Margaret chimed in that you can read that whole scene play out in the novel “Galaxy’s Edge: Black Spire” by Delilah S. Dawson.

As for DJ R-3X, our ex-Star Tours Pilot, Margaret confirmed the many pages of backstory provided by Matt Martin.

But it’s this bit of info that may be useful to some who want to crack it. Anisha tells us that if we choose to use the Datapad inside the Cantina, we just might be able to find a piece of DJ R-3X’s memory. (we still need to try this out)

Kris talks about the operational standpoint of creating a land of this scale:

“I think operations naturally tends to have that practical nature to them. Our job as we go through from the very beginning is to make sure it’s able to function as a land and function with high volume. So many times, not only because I’m in operations, we can be a little bit of a downer sometimes in the conversation saying what we’re going to do and what we’re able to accomplish. We want to tell the stories of Star Wars: Galaxy’s Edge and bring that to life, bring Disney stories and the theme park aspect to it. Many times it was just collaborating with these guys to just say “we might not be able to do that, but if we tweaked it in this manner, maybe we can both achieve the storytelling that you’re looking for and make sure it can function as well”. And there’s many different kinds of conversations… you can’t imagine the conversations we’ve had on shoelaces.”


Later in the panel they conversation shifted onto the backstories of the cast members. Could they say they lived in Black Spire Outpost? What if they had a dog and wanted to bring that into their story? Margaret explained:

“This was something we took very seriously. As we started training our trainers, they were asking a lot of good questions, which is, “can I say that I live in that apartment over there?” And we were like “no, not really”. So we actually had to come up with backstories that all of them are commuting to Black Spire Outpost. We came up with the backstories of the three different vicinities that you could be from depending on how you are in real life. There’s a community that’s a river community, the Surrabat River Valley for the hearty type of people. There’s the district for those who are tinkerers and really love to do droid racing and all this. And our cast members just ate it up, they loved it so much.”

Here are some other highlights from the panel, from the Disney Parks Blog:

“This was an incredible project. Projects like this are complex, they last a long time and building a team that is dynamic and collaborative is always tricky. You match the Disney fans with the Star Wars fans, the expectation of what we had to deliver and what we needed and wanted to deliverwas huge.”  – Robin Reardon, Executive Portfolio Producer at Walt Disney Imagineering

“It’s not just sight and hearing anymore. We’re tasting, touching and hearing things. We’re interacting with characters that were just action figures in our backyards and rooms and now they’re actions figures come to life and they’re responding and reacting to us – it’s unimaginable.”

“One of the things that was really incredible was thinking in a whole new way about the depth of the story that would have to be created to make this place feel real and immersive. The reason it feels authentic is because it has that natural progression and the evolution of Star Wars history. So much of it was creating a culture of a place and we wanted to make it feel like as if it was a place you never knew you always wanted to go.”

“It’s important that you have diversity from all points of view because you need to fill stories with all those different perspectives to keep them engaged and interesting. It’s just about trying to make sure the stories that you’re telling are relevant to the audience participating in them. And so our hope with Star Wars is so everyone can find themselves in these stories that we’re telling.”

“All of the storylines are relevant – all of them are important. Everyone has something unique about Star Wars that they latch onto, and that’s something that we wanted to bring to life. We really wanted to make sure that all of our guests had the opportunity to have a really unique, customized experience that they chose how to spend their time.”  – Anisha Deshmane, Assistant Producer at Walt Disney Imagineering

“We want to tell the stories of Star Wars: Galaxy’s Edge – bring that to life, bring Disney stories and also the theme park aspect to it, and so many times it was really just collaboration.”

“A place can’t come to life without people and our cast. We worked really hard at Disneyland Resort to make sure we were getting the cast very excited and making sure they were going to be able to add to the storytelling in the land.” – Kris Theiler, Vice President, Disneyland Park

The inspiring women shared a lot of insight into the land, and it sounds like they’re just getting started.