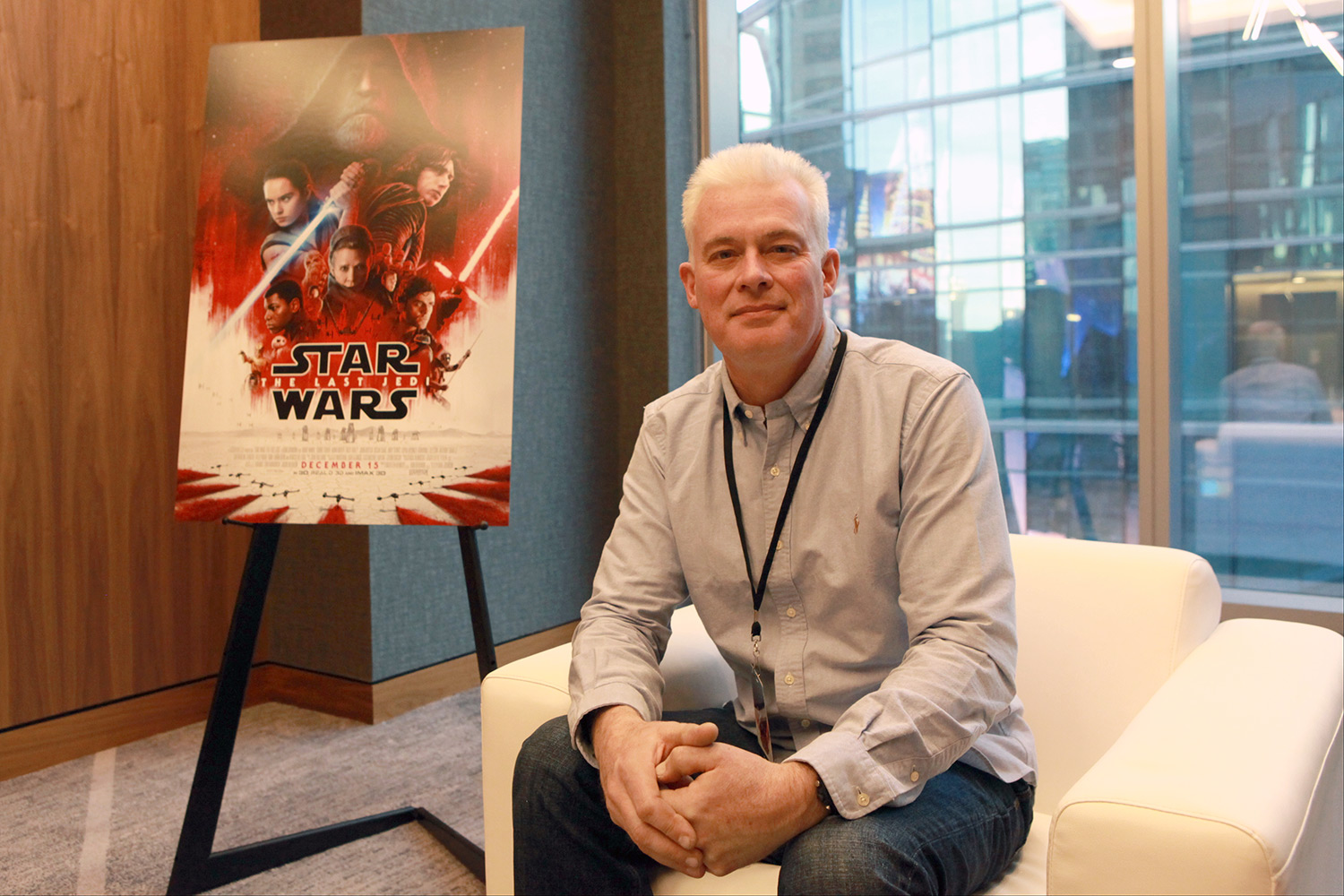 Background weirdos have been a tradition since the very first Star Wars in 1977. Kids growing up at the time got to know them well through the original Kenner action figures with the likes of Walrus Man, Hammer Head, and Greedo. If you’ve seen the latest Disney Star Wars films (The Force Awakens, Rogue One, The Last Jedi), the work of Neal Scanlan and his team of creature experts carry on that long-lasting tradition of aliens, creatures, and anything in between. We caught up with Neal when he was in town for The Last Jedi’s premiere to talk about the newest creatures and about his involvement with the Star Wars Universe.

EndorExpress: Neal, you’ve had quite the mini-career working on Star Wars!

Neal Scanlan: And Han Solo after this! (laughs)

EE: And then followed by Episode IX! It’s incredible, and I can’t help but wonder with so much work going into all of these films, is there any cross-pollination in the creation of these creatures for use in several films?

Neal: Yeah, there is. I mean, the truth be known, we made an enormous amount of creatures for Rogue One that never made the final movie, and some of them have been brought forward and used in subsequent films. I think in many ways, there is something very unique and specific about a Star Wars character. It’s what makes Star Wars Star Wars. And if it’s good, in a sense, for one movie, it’s good for another. Obviously many of them are designed for a moment of storytelling so therefore they may not be truly applicable but there are generic characters among our world and there are generic races that live and mingle in their galaxy too so why not? And that’s true of the Legacy characters as well.

EE: Was there a mandate to create an X amount of new characters or was there a certain amount to fill a certain quota?

Neal: I wouldn’t say it’s as clinical as that but there is – one of the amazing things Rian has done is he’s taken the first step, I feel, and you’ll know when you see the movie what I’m talking about. There’s a point where we wave good bye to the past a little and start to take those first steps in standing on our own two feet. And what I mean by that is in Force Awakens, we very much look back on the legacy that George (Lucas) has created, what Ralph McQuarrie and Joe Johnston and what those guys have done… in order to take the ego out of it and understand the brilliance of what these amazing people have achieved… There’s a point where we can’t keep going back and relying on that and Rian has forced us to visit some places we haven’t seen before and that then demands that you stand creatively. We take the reassurances that you understand the genre implicity, but there’s never really a mandate that you have to have this many creatures. It’s totally story driven.

EE: How do you feel about the returning characters? We’ve seen the return of Admiral Ackbar and Nien Nunb. Are there any other alien creature that we can expect to see a return?

Neal: I constantly fight to get as many as those characters back because they’re so beloved aren’t they? If we can sneak one in here or there, we will!

EE: It’s almost a reassurance if you will, because it’s something we recognize.  My friends and I lovingly call them “background weirdos”.

EE: Is there an alien you love that did not make it into the movie?

Neal: I don’t know yet as I haven’t yet seen the movie, but what I do know is that there are more aliens, creatures, and droids produced for this movie than in any other Star Wars film. We topped nearly 180 to 200 individual things. It is an odd thing to ask because things are favored for different reasons, and I’m so relieved that people have responded mostly positive to the Porgs. People have seemed to engaged with the cyrstal fox (Vulptex). The Fathiers, you know, there are all the characters on Canto Bight, which is essentially, you know, the Monte Carlo of this world, and there is a lot more you haven’t seen yet. There are favorites that I cannot tell you about yet.

EE:  During the production process are you learning the names of these creatures and aliens yet?

Neal: No, we work absolutely during the production process with codes for secrecy. We then often have a retrospective phone call with Pablo (Hidalgo) and the guys and he’ll ask “what were you thinking about when you designed this character?” and I’ll maybe say that this one is kind of like the actor John Candy, he’s sweet at heart but he’s this, this, and that, and we have a bit of fun playing with ideas and that’s when we get to hear what their real names are. BB-8, for instance, started out as Snow Girl or  Globe at one time – there were four or five names for BB-8. BB-8 didn’t come until VERY, very late, and that’s probably for very good reasons as he’s such an important character.

EE: You mentioned the Crystal Fox. What we end up seeing on screen will mostly be Computer Graphics?

Neal: Yeah. We started the creative process with Rian and we had a little whippet dog come in and we made a micro suit for it and covered this dog with drinking straws. It was trained and we had it run around and you had this beautiful visual of all these things moving, the sound of them moving… but it wasn’t bright enough or beautiful enough to be called crystal so we decided we couldn’t go that route, so we made a practicial version. I would say that most of what you see in the movie is CG because the crystals were just too heavy for a real dog to wear, which is a real shame from my perspective. So to get these wonderful things we have in the film, it will be CG. However, we did build an animatronic version and we hope that it exists in the close-ups, we certainly shot those close-ups.

EE: And it certainly helps the CG team by having this practical model too..

Neal: Absolutely, absolutely. It’s a fantastic combination between ourselves and ILM. We work very closely now and I get as much joy – I have to say it was not true several years ago, I’ll be honest… but now I suppose I’m more secure and maybe I feel more confident about what we bring to the show. It’s a fabulous thing to do something like the crystal fox and have that scanned it and see it realized in digital because they can do anything can’t they? It’s wonderful to see your creation running and jumping, doing stuff that we would never be able to envison as practical.

EE: Was Rian Johnson the only one who took home a Porg?

Neal: No, Ram (Bergman) has one also! (laughs) And Kathleen Kennedy.

EE: Being a creator of so many creatures and things, do you ever collect the merchandise and figures that are made?

Neal: I do collect. I think moreso than anybody for the concept team, because I have to say, I am only as good as the people around me and I would be unbelievably arrogant for me to lay claim to so many of these fantastic designs that the guys do. I think for them, it must be an amazing experience. They started as children, they design something, they walk into the shop and there is their design of a character. To me I find it ultimately satisfying that they make it as toys. I’m not a huge collector of general things, but some of the really high-end models or maquettes that are made, I really appreciate the beauty and the skills that went into them, the same way I do the people who work for me. I do buy those, I think they are beautifully made, and I am in awe of that.

EE: Thank you so much for you to do and we look forward to your next project

Star Wars: The Last Jedi is now playing in theaters everywhere. Solo: A Star Wars Story arrives in theaters this May, 2018.

Photo of Neal by David Yeh. Other photo’s © Disney / Lucasfilm

David Yeh
A long time fan of both Disney and Star Wars, he has a hard time resisting the temptations of Disney’s merchandising force. If you see pictures of the toys and pins, you can bet they are from Dave, our resident collecting guru.
Read more from David Yeh
Tags: Neal Scanlan
Loading Comments...