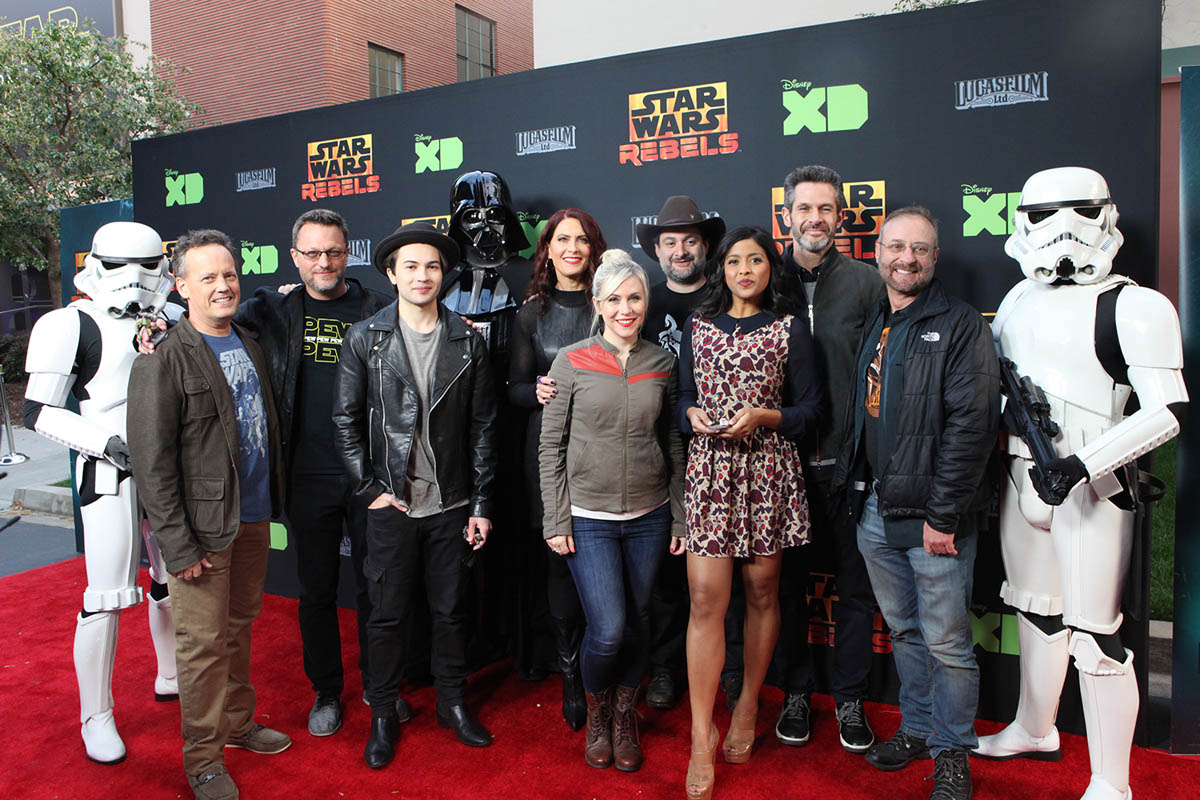 (SPOILERS DISCUSSED BELOW. READ AFTER SEEING THE SEASON TWO FINALE)

Star Wars Rebels Season Two has finally come to a climactic end; in a moment many Clone Wars fans were left wondering if it would ever come to fruition. Anakin Skywalker, now Darth Vader, is hunting down Jedi Knights throughout the galaxy, but his apprentice Ahsoka Tano, refusing to be labeled as a Jedi, still fights for the forces of good as her two white lightsaber blades show her neutrality. The twist in this season closer is that there’s another foe brought back into the mix: Darth Maul, the fan favorite Sith-Lord is back in the picture, but claims to disavow the Sith and is on his own mission to destroy Lord Vader.

Without disclosing too much, Ahsoka Tano does indeed face off with her old master, and even to those who have seen the finale, many questions remain and many new questions arise. One thing is for certain, everything will be very different for the entire crew of the Ghost in Season 3.

Director / Co-Creator Dave Filoni was joined by Producer Simon Kinberg, voice of Ahsoka Tano: Ashley Eckstein, and voice of Ezra Bridger: Taylor Gray on Monday evening for a premiere screening of the Season 2 Finale and a Q&A following to discuss the Finale. Here are some highlights.

Dave Filoni on Darth Vader and Ahsoka:
“With Vader, you can’t bring Vader in to challenge Ezra and Kanan, he’s just not going to be that interested in them. You had to have a character he was personally invested in. Once we had a personal story that would be a foundation, it made more sense to tell the story. Plus Ahsoka can interact with Ezra and Kanan and kind of get a more complete tale.”

Simon Kinberg on writing the finale:
“When I wrote the original draft of this, I wrote it with scenes with dialogue. And you [Dave Filoni] took it and sent us a choral classical piece of music and it was your idea to make it all non-verbal and musical and it was 100% the right way to go. I also remember we were all sitting around a table and you drew an image of Vader’s split mask, which was, I thought was one of the most compelling scenes in all of Star Wars and it ended up in the show.”

Dave Filoni on the duel:
“One of the images paramount to this story, of Ahsoka fighting Darth Vader that I had over the years, and I thought about it for a long time is the image of her literally leaping onto his chest, poised with her two sabers, knock one lightsaber away and strike at the helmet. That was always something that lasted year after year after year. Sometimes she’d die, sometimes she didn’t die after that.”

Dave Filoni on Ahsoka’s status after the finale:
“I think that right now what’s important, it’s really a moment for you the fan and for me to see more of what you’re made of. How strong is your faith? What do you believe? What do you see there in the final moments? Because I know what happens there in the final moments. I think it would be cruel and rob you of your independence. I didn’t put an image of Vader dragging her head at the end, that would be horrible. I picked a nebulous end with complete certainty as to what happened.”

One of the things Dave and Simon discussed was Darth Maul and when to reveal him to the characters and audiences. Maul was discussed early on to be put into the final arc but is he an ally or an enemy? It was decided not to show his face until he gains Ezra’s trust, and it was something that Ezra and Kanan could debate amongst themselves. Cloth simulation was also a factor in Maul’s design, due to their limitations. Vader makes use of the cloth simulation so that meant Maul had to be designed accordingly.

Dave Filoni on Ahsoka and Anakin as Darth Vader.
“She doesn’t want to believe that Anakin would be capable of becoming Darth Vader. George Lucas and I talked at length about Order 66 and Ahsoka and what happened.. We had it all figured it out. The key element is that her whole life when she is trained by Anakin and is at peace and calm, she looks into the force, she can sense the presence of her friend. She’s always looking into the Force and being comforted that he is there. When Order 66 happens, she reaches out to the Force and Anakin is gone. There is no Anakin Skywalker. She assumes he’s dead. When she encounters Darth Vader at the beginning of Rebels Season 2, she looks into the dark void and at the center of it, she gets hit by something so familiar and overpowering that it shocks her back and she goes unconscious. Her unconcious mind is completely aware that Darth Vader is Anakin Skywalker. She just cannot accept that truth. She spends the whole season coming to grips with that fact that this is the truth. Once she understands the truth, she is faced with the same problem Luke Skywalker faces, which is for Luke “I cannot kill my own father.” and she cannot kill this person that is her dear friend. She just can’t do it. Nor will she leave him and abandon him. She feels guilt. If he became this terrible dark person and did all these horrible things, she feels in part responsible because she could have been there and prevented it.”

One of the hilights of seeing Ashley Eckstein with Dave Filoni talk in front of an audience is to address the elephant in the room. Does Ahsoka return?
Ashley: So I want to know… am I reprinting the Ahsoka Lives t-shirt? Or am I desiging the Ahsoka’s Dead t-shirt?
Dave: I think what’s great about this.. you can sell two shirts. What you do is sell this “Ahsoka Lives” t-shirt for the optimist. And then you sell a new shirt, and all you have to do is take that design and add a question mark. That’s all you have to do! It’s an inexpensive thing. You can even take back stock of shirts you can’t sell, put a question mark on it and it’s a brand new shirt.

Simon on Indiana Jones influences in the finale:
“Raiders is, for a lot of us, the 2nd or 3rd favorite thing we had growing up after Star Wars, and it was something we were talking about while we were developing it. It was very much a conscious reference for us and an opportunity we thought for the first time in the show to do a slightly different genre. It was there on purpose.”

Dave on putting the cross guard lightsaber in the finale:
“It was a very big challenge to make Star Wars on any level and the pressure the Episode VII team had faced to bring that to life was huge. I thought where they were the most daring was BB-8 and the cross guard lightsaber because we haven’t seen that before. I love Star Wars I haven’t seen before. I like to point out to our design team that I didn’t know there were walkers on snow until I saw them. I didn’t know there’s a city in the clouds until I saw it. I loved those moments in those movies. And they came up with this lightsaber that caused a big stir in fandom. It’s always great when something does that and Kylo Ren was really fascinating to me because he seemed to be a student of history, especially Sith history and Jedi history. I asked if I could put a cross blade lightsaber in the ruins of this temple. I just wanted to put it in for one shot as a nod to those guys for the tremendous achievement they were making in this unique saber. And that thousands of years ago there was some Jedi that had it. I’ve seen double bladed sabers that are Jedi and double bladed sabers that are Sith. I don’t think there are many things that one of the groups did that the other didn’t try.”

Dave on Captain Rex appearing in Return of the Jedi:
“I really think Rex is that guy on Endor [Nik Sant, not Noa]. I really do. Why is there a bearded old guy on Endor? Why? It makes no sense! If you don’t want that to happen, I’m going to make that happen!”

Thank you to the entire DisneyXD and Lucasfilm team!