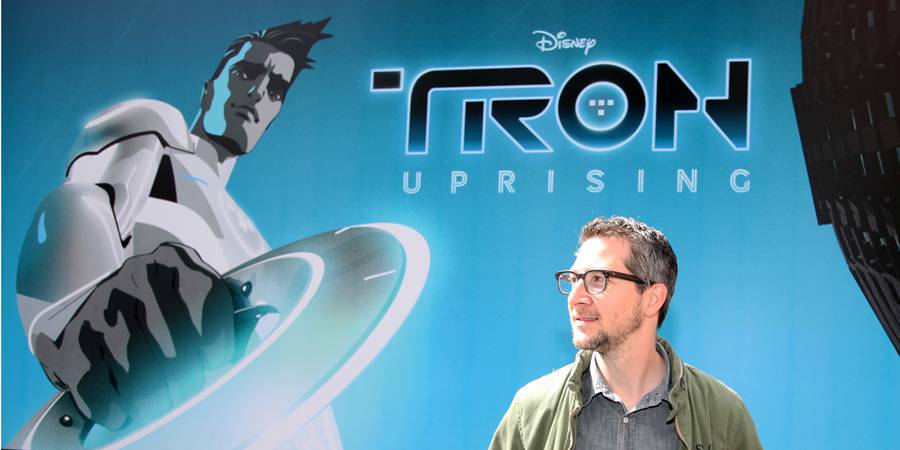 With the premiere of TRON: UPRISING right around the corner, we were eager to find out more about this incredible new animated series from Disney.  We had the great fortune to speak with Tron himself, Bruce Boxleitner, but we didn’t stop there.  We went to Charlie Bean, Director and Executive Producer of Tron: Uprising to find out just a little bit more.

Although we were meeting Charlie for the first time, we aren’t a stranger to his work.  And certainly Charlie is no stranger to animation having worked on many of your favorites and mine such as The Powerpuff Girls, Samurai Jack, Dexter’s Laboratory, Spongebob Squarepants, Tiny Toon Adventures, Animaniacs, Batman, and more.  We caught up with Charlie Bean in Hollywood, Calif. to find out more behind the scenes.

EndorExpress:  Can you tell us how you got involved?  What was the process starting from Tron: Legacy leading to Tron: Uprising?

Charlie Bean:  It started with Eddie Kitsis and Adam Horowitz, the writers of Tron: Legacy.  They have been so deep into that world that stories started exploding.  They basically just wanted to tell more stories and so they got together with Disney Television Animation.  The idea of an animated series just seemed like the right fit.  I was brought in by my friend who is the development guy at Disney since we’ve been wanting to work together again for some time.  He listed off a number of projects but I left saying that I was most interested in the “Tron” thing -That’s what I wanted to work on.  He called me two days later and asked me when I could begin.

EE:  From a public point of view, it might feel as if Tron wasn’t something that has been as supported or embraced due to lower than expected box-office performance or other reasons. It was a sigh of relief from everyone who is a fan that this series even exists.

CB:  What’s cool is that Disney has been really, really behind us.  It’s the first thing I’ve worked on that has a connection to a film and usually there’s a big separation between the film part of it and the series part of it.  This couldn’t be further from that.  The film people have been actively involved with it.  Eddie and Adam who wrote Tron: Legacy created this animated series.  Justin Springer who was a producer on the film is a producer on this as well.  He’s been with me right from the beginning.  Also Daniel Simon who designed all the vehicles in the film, he’s the lead designer for this as well.

EE:  Seeing the pilot, I was amazed at all the new vehicle designs.

CB:  We talked about that a lot, me and Daniel.  This takes place before “Legacy” but after the first film so we tried to figure out the design evolution.  Where would we be design-wise?  For Daniel, it was an opportunity to do so many more vehicles.  We’ve got boats and trains and different kinds of tanks… huge battleships!

EE:  Can you talk to us about getting all the voice talent for Tron: Uprising?  The roster is so impressive for an animated series.

CB:  Yeah!  It is amazing.  It’s sort of a testament to Tron and how much people are into it.  It all started with Elijah Woods.  I had a very specific idea of what I wanted for the character of Beck and who this character was.  I really wanted a character that had a real intelligence and emotional depth.  We met up with him and showed him some artwork and he really wanted to do it.  Bruce Boxleitner was obviously the first person in because he’s Tron, and once I put the two of them together, just listening to how they sound together.

EE:  He has a really great voice, Bruce Boxleitner.  Growing up and watching cartoons based on movies, it was always disappointing when the actors wouldn’t reprise their roles and it always felt like a disconnect, so I think having him adds to the credibility of Uprising.

CB:  Right!  Yeah, and I mean the rest of the cast came together like that too.  I know Mandy Moore’s husband is a massive Tron fan so it really is unbelievable.

CB:  Paul is my favorite person in the world and I’m such a huge fan.  I think he’s so talented and gifted but he’s also got a broad range outside of Pee Wee Herman.

EE:    Does his character stick around for more episodes?

CB:  Yeah, he’s barely in the pilot but he is deeply in the series.  It’s a dream come true getting people I’m a huge fan of to be in this.

EE:  Are you tied to the Consumer Products aspect of Tron: Uprising at all?

CB:  I’m not, I’ve been saying that I would love to do toys.  I’m a huge fan of collector toys so that would be really, really cool to do.  We haven’t started that yet but hopefully when this takes off we can do them.  I’ll just go on record and say that I’d love to be involved with that.

EE:  Now, doing the series in CG with a 2D aesthetic… what was the thought process behind that?  I think it’s fantastic.

CB:  It’s interesting.  Tron is at the forefront of using computer technology and animation so we definitely wanted to do that.  But I come from a 2D background so we came about it with a 2D approach and wanted that aesthetic.  It’s an interesting blend of our taste and the latest technology.