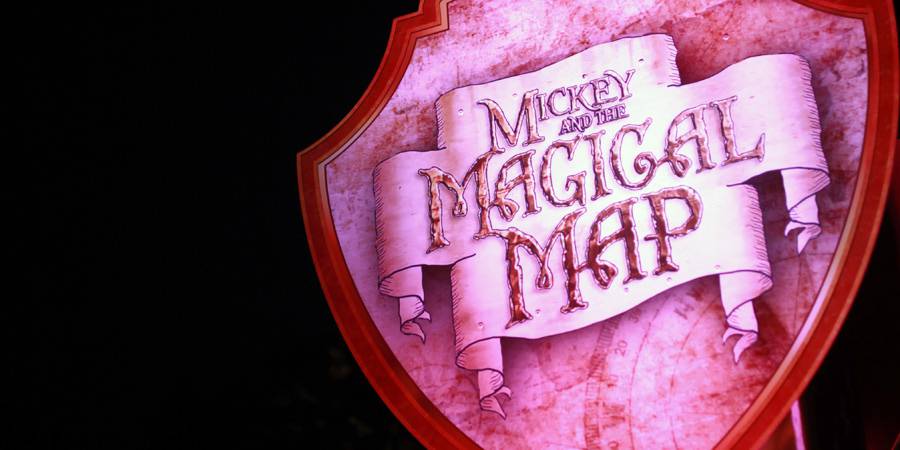 Brian Curran
Mickey and the Magical Map
By David Yeh

Disneyland Park just got happier this past weekend as they debut a brand new show in the fully restored Fantasyland Theatre. Mickey and the Magical Map takes guests on a musical adventure with their favorite pal Mickey Mouse and a cast of over 50 singers and dancers.  It’s a return to form for the popular park and a much better use of space than the princess meet & greets that ran from 2006-2012.

Performing five shows daily, Mickey and the Magical Map reunites the Fantasia’s Sorcerer Yen Sid (Disney spelled backwards) with apprentice Mickey, who is charged with completing a map with the team of talented mapmakers.  Mickey is back to his older mischievous ways and discovers a blank spot on the map that still needs to be painted.  The “Spot” having a mind of its own dodges and avoids Mickey’s attempts and in the mean time, activates the magical map, transporting itself along with Mickey to other worlds within the Disney pantheon: from the jungles of The Jungle Book to the depths of The Little Mermaid’s ocean, from a Hawaiian Roller coaster Ride to way down south of the Bayou.

The animated destinations is where the meat of the show lies and where most fans will become the most critical.  In the positive side, a newly designed King Louie is singing and dancing his way around “I Wan’na Be Like You” with a great trumpet accompaniment.  The entertainers throughout the show are energetic, exciting, and wonderful to look at

Another highlight of the show is Pocahontas, Mulan, and Rapunzel and Flynn Rider, all singing memorable songs from their films.  Where it starts become a little murky is when we go down “Under the Sea”, a song that is far overused, from Ariel’s Undersea Adventure attraction in Paradise Pier, to the World of Color, it is time Disney found something else to delight guests.

The Little Mermaid is followed up with Lilo & Stitch’s “Hawaiian Rollercoaster Ride” which is a great tune, but much too laid back compared to the strong, energetic acts prior.  There’s also a lack of characters in this segment as neither Lilo nor Stitch dance for the audience.  The finale is a wonderful show stopper of “Dig A Little Deeper” from The Princess and the Frog.

There are a few flaws in Mickey and the Magical Map and the most contributing factor is how the songs were ordered.  It goes from high-energy mayem to a very mellow Hawaiian Roller Coaster ride and THEN back to high energy with the Princess and the Frog number.  But with the use of the map storyline, I imagine it wouldn’t be too difficult to update this show throughout the years, keeping fans enchanted for years to come, bringing in other familiar animated classics and some that aren’t as well known.

Despite my minor issues, Mickey and the Magical Map is a wonderful show that is entirely entertaining and just another unique experience for the Disneyland resort that cannot be enjoyed elsewhere.  Clocking in at 22 minutes, the show is the right amount of time to rest your weary feet and be entertained.  You can catch Mickey and the Magical Map seven days a week, five performances daily this summer!

David Yeh
A long time fan of both Disney and Star Wars, he has a hard time resisting the temptations of Disney’s merchandising force. If you see pictures of the toys and pins, you can bet they are from Dave, our resident collecting guru.
Read more from David Yeh
Tags: Disney Parks, Mickey and the Magical Map
Loading Comments...