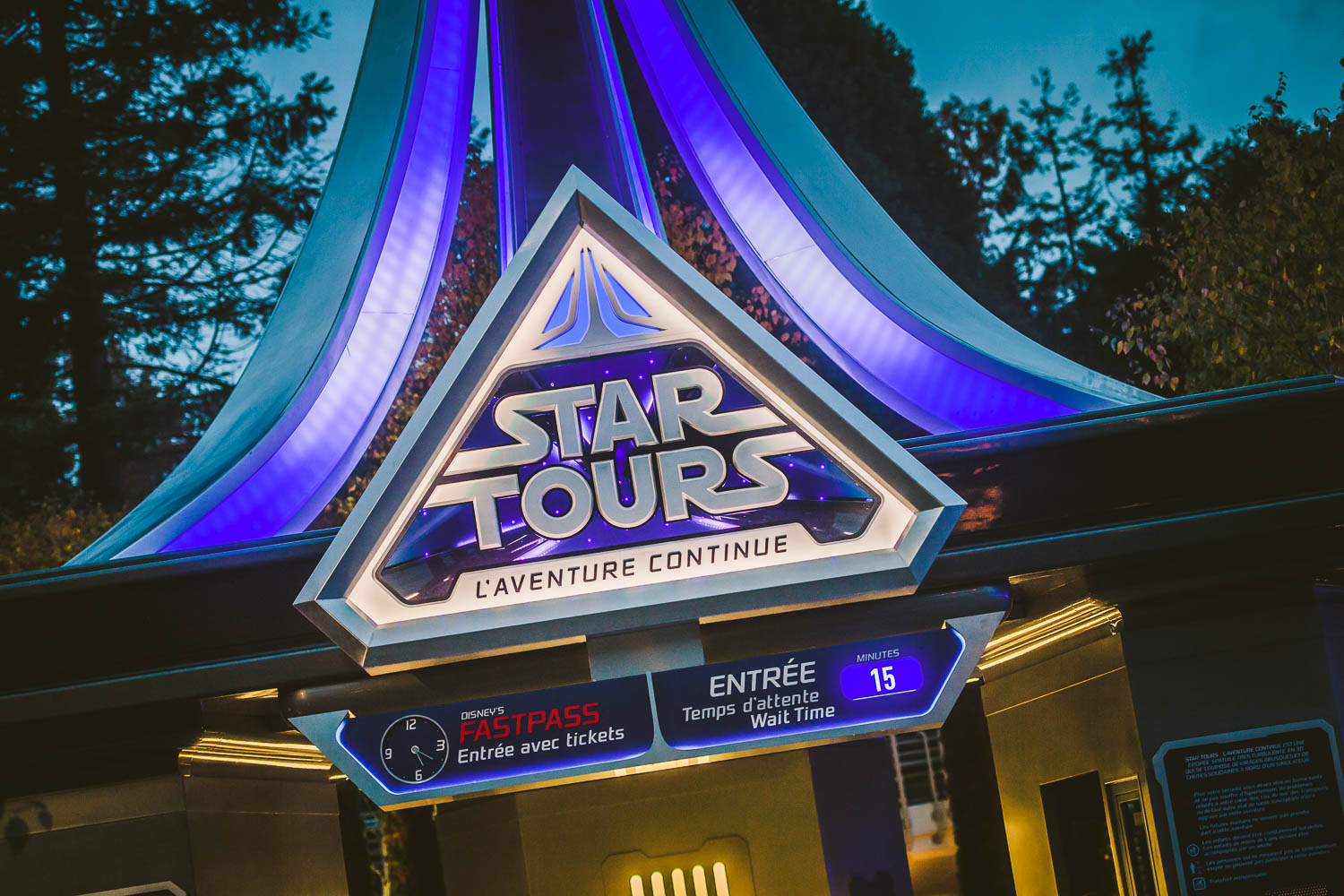 When Star Tours: L’Aventures Continue finally debuted in Disneyland Paris on March 26th I wasn’t exactly impressed with the French copy of Star Tours: The Adventures Continue. My exact words were that it lacked soul, and felt like a cold airport, without any of the run-down charm we loved from the original Star Tours.

The graphics looked every bit as dated as you’d expect from 2010, and on top of it all, everything except six seconds of Aly San-San were in French, in what used to be a mix of 68% French, 30% in English and 2% in Ewokese. (We did the math).

But, feedback seems to have worked, as the experience we had last week at the soft opening of the new scenes was a far cry in the best way possible from the opening day thanks to some well placed improvements Disney has implemented over the past half year.

First of all, the queue itself. The advertisements are now again a 50/50 mix, with Allison Janney’s great voice now booming all over the Front Maintenance Bay. And in what used to be Sector 2, the G2 droids both mix between English and French. And it appears the lighting has been improved as well, with more warm light splashed across the area.

Onto the ride! Just like the sequel trilogy forgoes the silly slapstick antics that plagued the prequels. Things falling over are just not funny. I can barely live with a wookiee on a windshield. But the Crait scene is not only pure adventure, it adds a sense a danger with the inclusion of Hux, and a sense of pure of joy as it almost directly lifts the asteroid scene from the original Star Tours (including music) into underground caves!

Gone are the video game graphics! Crait and Batuu share the luxury with Jakku that ILM really is at the top of their game, with especially the Walker scene from Crait looking like it’s directly lifted from the scenes from The Last Jedi is lightyears ahead of the CGI recreation of the Boonta Eve pod race on Tatooine.

Landing on Galaxy’s Edge’s Batuu is also a stroke of genius. Especially in Disney’s Hollywood Studios where they are close enough to actually match up with a bit of trickery. It’s an idea we would love to see as well in Disneyland Paris, where with a bit of creativity, there should be enough space for Galaxy’s Edge.

With the new temporary non-randomised version that features all the Sequel content until at least Season Of The Force, guests are getting the very best of what Star Tours has to offer.

However how cool the new ride looks, the greatest surprise that we learned Friday is that starting with the Crait scenes, Cast Members can now choose to play the original English version instead of the dubbed French version.

Don’t get me wrong, I don’t hate French as I used to do, and I understand it if not spoken too quickly. I understood Luq Hamet’s Captain Rex most of the time, and combined with all the other characters speaking English it’s easy to understand what is happening. However, the French spiel that Anthony Daniels recorded for Star Tours: L’Aventures Continue is just to fast to understand anything that’s happening for those with just a basic grip on French.

The worst part however is that the live-action characters are dubbed in French as well. C-3PO is known to speak six million forms of communications, and has no lips, but it just feels very wrong to see characters like Leia, Finn or Hux move their lips, but the words not matching. I would be quite okay with a hybrid version where all the visual characters speak English, because C-3PO repeats most of it back anyhow, but Disneyland Paris now giving us the option to experience it all in English is nothing short of amazing.

You see, I’ve never made it to the other parks, and I will never have the chance experience Captain Rex in English, apart from YouTube videos. So having the chance to experiencing Star Tours and finally understand everything was quite a big moment for me, and managed to catch that original spark that got me into Star Tours all the way since my first visit in 2001.

For my next visit, it will be straight to Discoveryland, as it always has been. But this time, the smile will be back.