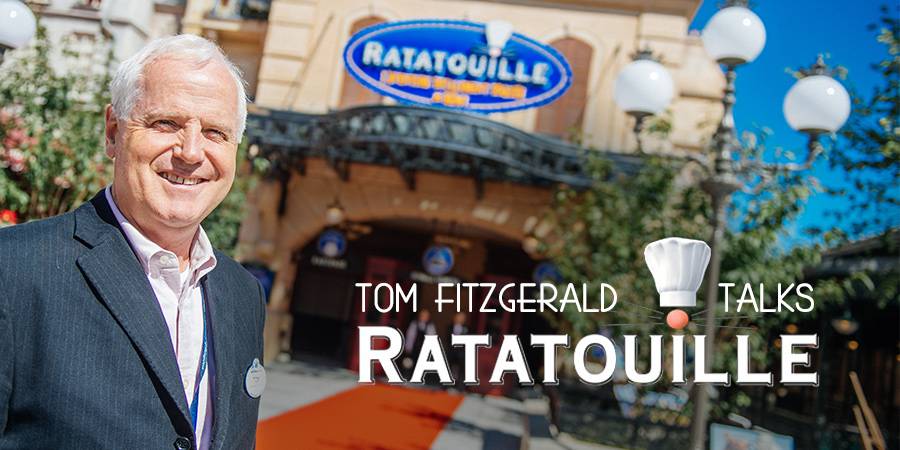 PARIS, FRANCE – For the opening of Disneyland Paris’ 60th attraction based on the hit-film Ratatouille, we sat down with imagineer Tom Fitzgerald to talk about the latest technology coming to this side of the ocean.

The attraction’s full name is Ratatouille: L’Aventure Totalement Toquée de Rémy. There is a pun in the French word toquée which not only means crazy, but is also used to describe the chef’s iconic hat. In English, they kept it simple and titled it Ratatouille: The Adventure, even though the name of the attraction translates into Remy’s Completely Crazy Adventure.

EE: Hi Tom, first of all, thank you for taking the time again to talk to us.

When did you first come up with a potential ride for the film?

Well, not very long after the film came out. It was such a huge hit here in France, which is not surprising given the movie’s theme’s and characters, that we said “wow, we should do something about it for Disneyland Paris”. But as always it takes many, many years. I think we spent over five years bringing it to life, so we’ve been working on it for a long time.

What was first? the function of the Ratatouille-story or the form of a state-of-the-art dark-ride?

It was always going to be a dark ride. It’s interesting, when we look at other films and properties, we don’t try and do a book report. We don’t try and tell the whole story of the film, because the film already does that, and does it very well. What we look for is if there are moments in the film that would translate well into a physical experience, and the scene in the movie that caught our attention is when Rémy falls into the kitchen at the very start of the movie. We said “that would make a great ride”.

We have a ride in the United States at Disneyland called Mr. Toad’s Wild Ride, a classic dark ride, and we’ve always wondered if there is another story that we can do with that type of crazy ride, where something starts and then it’s just a gauntlet of crazy things happening, going from one scene to the next. So we started with that and what was really interesting, I think, was going back to Brad Bird, the film’s director, who revealed to us that very scene was the first one animated, to show everything they could pull it off. So that very first scene was the one we fell in love with and would be a great ride.

We started with that, and then came the next step, the ride’s technology. So we invented a new ride system for this. It has no track and the rats move in different ways each time you ride it. So we tried to combine that with 3D Animation on a large scale, huge dimensional sets and blend the sets and technology together in a way that you can move seamlessly through the environments was the goal.

Is it the same trackless technology that can also be found in Pooh’s Hunny Hunt in Tokyo and Mystic Manor in Hong Kong.

It’s similar in the sense of the same companies construction the vehicles, but they are not the same. In fact the system was co-developed with Mystic Manor which opened last year, but we asked for the Ratatouille vehicles to do more. So we wanted to go forward, backward, spin, tilt. So we’ve added all those things because we really want to give people the feeling they are on a rat. It has to feel like it’s scurrying and constantly moving so we added shakes, so we kept adding a lot of features and technology so it really felt you are on board a cute little rat, well, big rat.

You mentioned Brad Bird earlier. How big was his involvement of the ride?

He met with us at the very beginning to make sure he felt good about the storyline, and then he reviewed, up at Pixar, all of the animation. We built full-sized mock-ups down in southern California where our offices are of every single screen. Then Pixar would fly down and look at the screens together, while he looked at them down are Pixar. His main goal was that every one of the characters were brought to life the same way they did in the movie. Our responsibility was to say “what do we need for each of these moments to do for us?” So we designed the action and then he made sure that Rémy and Emile were animated as they should be.

Michael Giacchino wrote the music for the movie and returned to score the ride. Tell us about that experience.

He’s great. Michael Giacchino is a huge fan of Disney parks and we’re huge fans of Michael Giacchino. We’ve done a number of projects with him. So when we first had the storyboards for this, he was at Imagineering and I showed him the storyboards and he said: “I want to do that. I am going to do that”. we said: “But you’re a very busy composer, you’ve got all these movies still to do”, but he wouldn’t budge. “I will make the time. I’m going to do that.” When we showed him our mock-ups he was even more convinced.

So not only did he score the original movie, he scored the ride, the restaurant and music for the entire land itself. You’ll notice if you go through that certain windows have solo’d instruments, so it sounds like there is an accordion player practicing in the window, but it’s all synchronised with the overal film score, so we gave him some challenges which he greatly pulled off. He loved it, and so did we!
(Read our 2011 interview with Michael Giacchino).

What is your favorite Disneyland Paris attraction?

Oooh.. it’s very hard, it’s like children. You sort of love them all. Of course I have a certain fondness for things I worked on, like Cinemagique is one of my favourite shows we did for this park. The film I did for the opening of the first park is no longer there, the Visionarium. That was fun to do back then. I always like the ones I’m working on, now or next.

I really love Ratatouille, it’s very different than the guests have seen here before, and it’s fun to finally ride it with guests instead of just the people you are making it with. It’s so great to hear the audience reactions of people screaming, laughing and reacting to all the things happening, so they do what we hoped they would do, which is great.

I think what I love most about this is the story line. You know when we first talked about doing this, we had a meeting to decide what we would do with the story. Because if you go with Ratatouille, you have to go with food. I mean, it’s all about food. So the idea of the restaurant was part of the original idea. At first everyone was saying that we were going to build Gusteau’s restaurant, but we weren’t convinced that was the right idea. Paris is so close by, we shouldn’t do a four-star restaurant when you have the real deal so close. When you want a super-elegant meal you can easily go to Paris.

What you can’t have is Rémy’s restaurant. Only we can build that. So from the very beginning is that Rémy is cooking a special meal for you and don’t be late. So that’s the setup of the the ride. So you have all these challenges to go through to make it to the restaurant, but in the end it’ a happy ending, the rats welcome you to the restaurant and when you get off the ride vehicles there it is! So it’s the scale of the rats with all the oversized tables and custom chairs. So I think the fantasy is, especially for kids, is that they want to eat the food Rémy is cooking for them. I think this is the first time that the restaurant is the finale from the storyline.

Something completely different now: when riding the original Star Tours in Paris, do you have the feeling that it should be upgraded, or feel nostalgia of it still being here?

It is nostalgic, and I’m sure one day we’ll have the new Star Tours. It’s a matter of timing. But you do see how far the world has come in terms of special effects and magic. Of course, the new one is 3D so it’s even more immersive. So it was fun to work on that, and also working on Ratatouille, which is also in 3D. Star Tours was a good setup, but in terms of technology Star Tours is just a moving theatre, while Ratatouille is three ride vehicles moving through the 3D. It looks quite simple when you ride it, but developing this has been a huge technical and complicated challenge.

It took several years and a lot of very smart people to make the 3D imagery adjust as you move, so the perspective stays right even though three vehicles are moving through. Very, very complicated! If you stood in the room and watch the movies they would look very strange as the perspective shifts to accommodate the moving vehicles. Really quirky stuff, but fun.

As an imagineer when you’re in a park you’re always looking at the details if everything is working. Half of your brain is constantly reviewing if that light is working, if the sound is correctly balanced .. That kind of stuff. These things are so complicated that you constantly are making mental notes. However, there are certain shows like Star Tours or Cinemagique where I get lost in the show. Especially in Cinemagique I always get lost. When I get in I want to look at something in a certain scene, but I get wrapped up in the story, getting teary-eyed when they get separated, and to me that’s a sign of great show. Even if you ride it a million times you lose yourself in the drama of humor of the show.

Ratatouille is still too new for me since I’m looking at all the details if everything is working since we are still tweaking the final details as we speak. We just want to make it perfect.

The real joy is to come in, ride it with people, see them clap at the end and say “that was amazing, I didn’t expect that, where were we”. So that’s fun.

Pictures and text © Kris Van de Sande and EndorExpress. Do not copy.