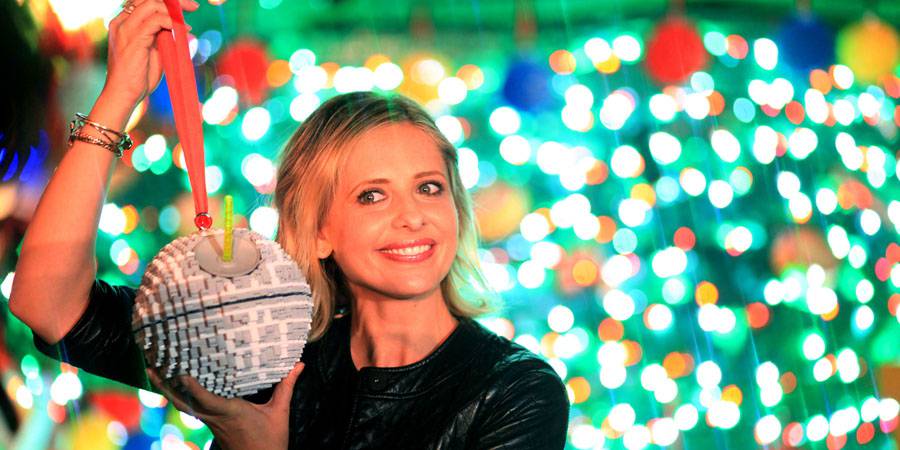 Gellar, a mother of two and married to actor Freddie Prinze Jr., is most known for her popular role as Buffy Summers in “Buffy the Vampire Slayer” and as Daphne in the movie “Scooby-Doo and “Scooby-Doo 2: Monsters Unleashed.” In honor of both Gellar and Prinze who are big Star Wars fans, plus Prinze stars as the voice of Kanan Jarrus in the Disney XD animated series Star Wars™ Rebels, LEGOLAND California Resort’s Master Model Builders created 15 LEGO Star Wars Death Star ornaments to help decorate this year’s tree. The ornaments also represent the Resort’s recent announcement of its new LEGO Star Wars™ Miniland Death Star opening March 5, 2015. Each LEGO Star Wars Death Star ornament is made up of more than 1,000 LEGO bricks.

“When LEGOLAND asked me to light the tree and at the same time do it as a way to raise money for Baby Buggy, which is all about children in poverty, it’s marrying my two favorite holiday traditions,” said Gellar.

At the ceremony, LEGOLAND California Resort presented a check for $10,000 on behalf of Gellar to Baby Buggy Inc. which works with a network of over 100 community-based organizations throughout the country to distribute new and gently used essentials such as cribs, diapers, strollers and clothing to families.

“A donation like this can help us provide more than the equivalent of 110,000 diapers to families in need,” said Director of Baby Buggy in Los Angeles Carly Harrill.

Gellar, her daughter Charlotte(5) and son Rocky (2) joined Santa on stage to help pull a magical switch connecting  the power to set off thousands of lights and a twinkling LEGO star, followed by snow showering Park guests and a fireworks show to officially kick-of the winter holiday. Following the ceremony, Gellar and her children raced to the ice skating rink at the entrance of the Park next to LEGOLAND Hotel to enjoy the rest of the evening skating.

Created out of more than 245,000 green DUPLO® bricks, the 30-foot tall Christmas tree is adorned with more than 400 LEGO ornaments and illuminated with more than 11,000 LED lights while towering over the theme park’s Fun Town winter wonderland. The tree lighting ceremony is part of LEGOLAND California Resort’s coolest holiday celebration ever, Holiday Snow Days and Winter Nights. Now through January 4, 2015, the Park transforms into a winter wonderland featuring more real snow than ever before with a tubing area for kids to slide down and, new this year, guests are invited to ice skate as an upgrade. Guests can enjoy festive entertainment plus nightly fireworks Dec. 26 through 31 and will conclude with San Diego’s biggest Kids’ New Year’s Eve Party on Dec. 31. All Holiday Snow Days and Winter Nights activities located inside the Park are included with regular Park admission. Tickets for the ice rink, located between the ticket booths and LEGOLAND® Hotel, are sold separately.

LEGOLAND® California Resort includes LEGOLAND® California, SEA LIFE® Aquarium, LEGOLAND® Water Park and LEGOLAND® Hotel. All are geared for families with children between the ages of 2 and 12. At LEGOLAND California, you’ll find more than 60 rides, shows and attractions including LEGO Star Wars™ Miniland Model Display, Pirate Reef and Dino Island.  SEA LIFE Aquarium is home to more than 5,000 living creatures and incorporates LEGO® models into a child’s voyage to the depths of the ocean featuring play zones, fun facts and quiz trails. LEGOLAND Water Park features more than seven slides, sandy beaches and the unique Build-A-Raft River. New this year, LEGO Legends of Chima Water Park presented by Cartoon Network where guests splash about in a Lion Temple Wave Pool, slide out of a crocodile’s mouth and race LEGO boats. The nation’s first LEGOLAND Hotel features 250 rooms, all themed either as pirate, adventure, or kingdom plus more than 3,500 LEGO models throughout the three-story hotel. For more information, visit  www.LEGOLAND.com or call (760) 918-LEGO (5346).

MERLIN ENTERTAINMENTS plc is the leading name in location-based, family entertainment. Europe’s number one and the world’s second-largest visitor attraction operator, Merlin now operates 104 attractions, 10 hotels/3 holiday villages in 22 countries and across 4 continents. The company aims to deliver memorable and rewarding experiences to its almost 60 million visitors worldwide, through its iconic global and local brands, and the commitment and passion of its managers and more than 20,000 employees.

Brian Curran
A Star Wars Fan since 1977 when he was just 2. Brian grew up in California where his family would often make trips to Disneyland. In 1987 he took his first “Trip to Endor” and doesn’t pass on a chance to go back! He also enjoys going to Conventions and meeting the actors from the Star Wars films.
Read more from Brian Curran
Tags: Freddie Prinze Jr., Sarah Michelle Gellar, Legoland California
Loading Comments...