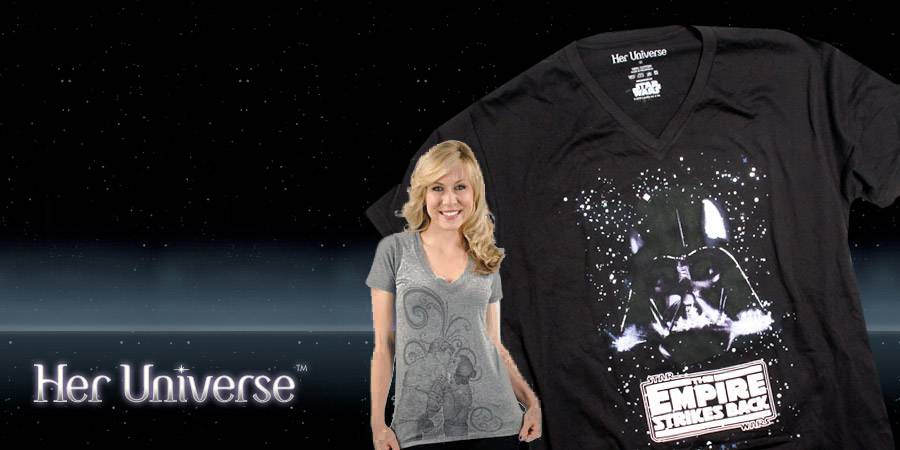 Star Wars Fangirl Apparel from Her Universe to be Offered for the First Time at Star Wars Weekends at Disney’s Hollywood Studios theme park.

LOS ANGELES, CA – Returning to Star Wars Weekends at Disney’s Hollywood Studios theme park in Lake Buena Vista, Fla. as Celebrity Host of “The Clone Wars: Behind the Force,” actress Ashley Eckstein (voice of Ahsoka Tano on Star Wars: The Clone Wars) will also be bringing an all-new, unique range of Star Wars fangirl-focused products to the month-long event at Walt Disney World Resort. Available for the duration of Star Wars Weekends 2011, Eckstein’s line of Her Universe apparel and accessories was created as a response to the ever-increasing demand for fashionable “geek chic” products among the growing community of female fans.

In addition to a product line that already includes female-focused shirts and undergarments, Her Universe will be premiering two new shirt designs at this year’s Star Wars Weekends event. Featuring images of Jedi Master Yoda and other famous characters from the beloved Star Wars Saga, both designs will be offered in female sizes with female fits – and, for the first time ever, two popular Her Universe designs will also be available in children’s sizes. The new designs will be available exclusively for a limited time at Disney’s Hollywood Studios during Star Wars Weekends 2011.

“As the voice of Ahsoka Tano, it warms my heart to see an increase in young girls who are now Star Wars fans because of The Clone Wars,” says Eckstein. “However, it bothered me when those little girls had to go to the boys section to buy their Star Wars shirts. Now little girls can buy shirts that are specially made just for them!”

For more information on Her Universe, visit www.heruniverse.com or contact dmadsen@araca.com.

Brian Curran
A Star Wars Fan since 1977 when he was just 2. Brian grew up in California where his family would often make trips to Disneyland. In 1987 he took his first “Trip to Endor” and doesn’t pass on a chance to go back! He also enjoys going to Conventions and meeting the actors from the Star Wars films.
Read more from Brian Curran
Tags: Disney’s Hollywood Studios, Ashley Eckstein, Ahsoka Tano, Star Wars: The Clone Wars, Walt Disney World Resort, Star Wars Weekends
Loading Comments...