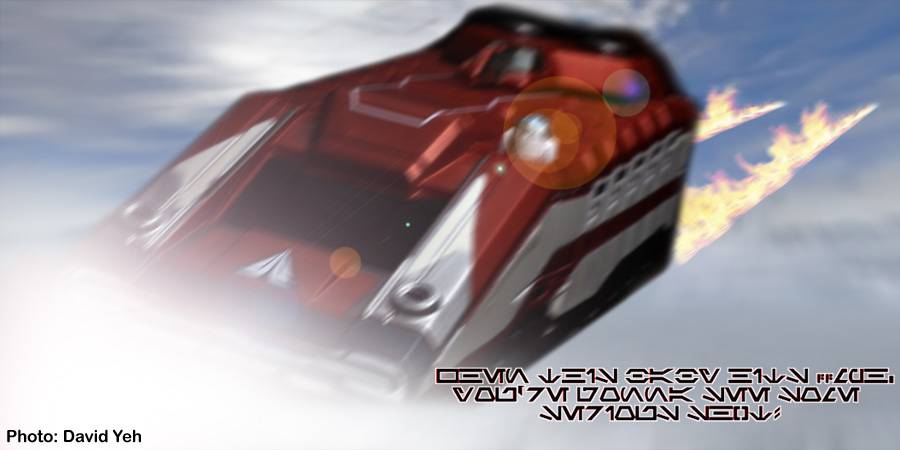 I’ve been having fun lately deciphering the omnipresent Aurebesh lettering found in Star Tours: The Adventures Continue. There is wording on the X-wing in the Star Trader which conceals the names of classic Disney characters like Mickey, Donald, the Cheshire Cat, and Peter Pan. G2-4T’s screen contains references to THX 1138, TK-421, the number 42 made famous in Hitchhiker’s Guide to the Galaxy, and 626, the experiment number of Disney alien Stitch.

Of course, there are also a few misspelled words. I recently downloaded an Aurebesh font for my computer, and discovered that it can be disconcerting to type in an unfamiliar alphabet, without the usual ease of telling at a glance whether you’ve mis-keyed. (I wish the Imagineers had learned my new trick… type it in English, double-check your spelling, highlight it, and THEN switch fonts!)

But late last night, while translating a new batch of pics that my buddy David Yeh sent of the screen behind C-3PO, I found a new inside joke that tops all the previous ones and makes even the worst typos forgiveable!

As in “flux capacitor”, the thing that makes time travel possible for Doc Brown’s Delorean time machine in Back to the Future!

So maybe that Hoth vignette isn’t out of the timeline after all… perhaps Threepio and Artoo have been taking you on a trip across time as well as space. It would certainly explain how characters from “a long time ago in a galaxy far, far away” seem to exist in perpetual stasis here on Earth (and every twenty years or so, they even go backwards in their timeline while we inexorably go forward in our own!)

Of course, this begs the question… did the classic StarSpeeder 3000, a later model, also include a flux capacitor? Could it too travel through time? We’re not sure.

It would further complicate the timeline placement, better known as the infamous “Third Death Star” debate. Since Doc Brown’s technology meant two Marty McFlys could co-exist at the same time, maybe R2-D2 actually can be in two places at once during the Battle of Yavin or the Battle of Endor. This would certainly help explain that ‘extra’ R2-D2 seen in the Tokyo post-show.

But Doc always warned Marty about having contact with his future or past self. And perhaps the two (or more) Artoos led to a localized rip in the space-time continuum. Just the sort of thing that might lead to G2 droids repeating themselves every five minutes, or a self-proclaimed rookie pilot making more than two decades’ worth of ‘first flights’.

This isn’t the first time a ‘flux capacitor’ reference has appeared in the Star Wars universe. As David unearthed, Tim Zahn’s short story “First Contact” from SW Adventure Journal #1 first borrowed the term, just as his other novels embraced concepts like Pink Five and Star Tours and snuck them into the rest of the canon as well.

And of course, there’s also the ‘theme park competition’ connection. I very fondly remember my trip to Orlando in 1991, riding my first-ever simulator (Star Tours) on one day, and my second-ever on the next— the 8-passenger Delorean in Universal Studios Florida’s sorely-missed Back to the Future: The Ride.

So, yeah, I love this inside joke.

Can the two franchises actually co-exist in one cohesive universe? Nah, of course not. By the single line of dialogue “I am Darth Vader, from the planet Vulcan!”, we know that Marty McFly saw the Star Wars— and Star Trek— movies as a kid in the 70’s and 80’s, just like we did, so in his reality they’re nothing more than fiction.

But to quote George Lucas’ alleged rationalization of the Hoth timeline error, “Ah, who cares?”

Having a flux capacitor on a StarSpeeder 1000 is FUN. Don’t overthink it, okay?

Alex Newborn
Alex is a lifelong fan of the Star Wars movies and everything Disney, so his obsession with Star Tours comes as no surprise. Born in 1970, Alex visited Walt Disney World for the first time in 1975, and saw the original Star Wars film in its first theatrical run in 1977. He returned to Disney in the 80’s and the 90’s… riding STAR TOURS (twice!) on one fateful day in 1991. He has yet to visit Disney in the new millennium, waiting for both his children to be the required 40″ tall to ride STAR TOURS. “What I’d really like to see is a Tour chartered for the planet New Bornalex,” says Alex with a smile. The planet, mentioned first in Cloak of Deception, is a Tuckerization of Alex’s name, an honor bestowed on him in print by author Jim Luceno. Alex is currently at work on a partial realisation of his childhood Disney-in-miniature wish– he is constructing a hyper-accurate 1:18 scale Star Tours diorama to showcase his collection of park-exclusive action figures. In the meantime, Alex is always on the lookout for more STAR TOURS video or audio files, and other STAR TOURS memoribilia. Alex also is our site’s researcher, and comes with never seen before goodies, for your entertainment. Give him a round of applause guys.
Read more from Alex Newborn
Tags: Darth Vader, Flux Capacitor, Back to the Future, Marty McFly, Delorean, Doc Brown, C-3PO, Starspeeder 1000, Star Tours: The Adventures Continue
Loading Comments...