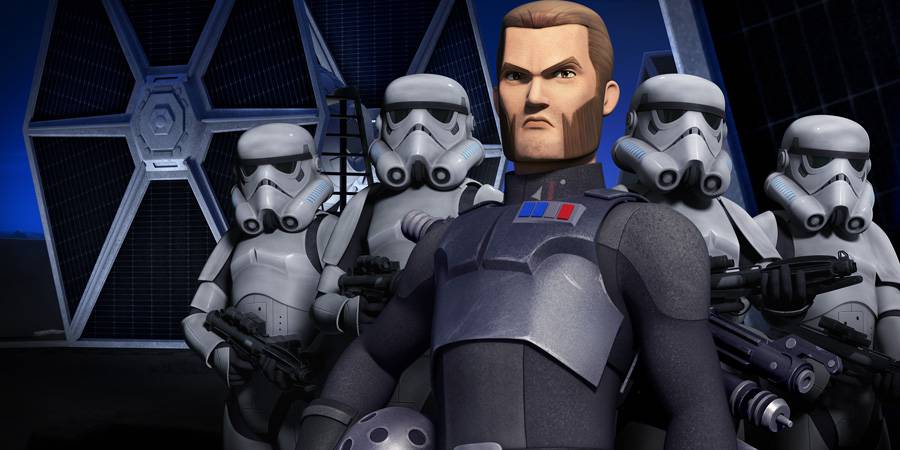 Meet Agent Kallus, the newest member of the Empire and a “major threat” to the heroes of the upcoming Star Wars Rebels animated series. Agent Kallus will be voiced by actor and Lucasfilm veteran (Red Tails), David Oyelowo. Read more on “one of the Empire’s leading enforcers” in the press release posted below!

Agent Kallus, one of the Empire’s leading enforcers in the upcoming Star Wars Rebels animated series, is a major threat for the Ghost crew’s small band of heroes.

Revealed here in this special behind-the-scenes video, Kallus is an Imperial Security Bureau (ISB) agent. According to David Oyelowo, who plays Agent Kallus, he’s ruthless, unforgiving, and an example of the Empire’s tyranny. “His job,” says Oyelowo, “is to basically make sure everyone stays loyal. And anyone who gives a whiff of disloyalty has to be cut out. So, I guess you could safely say he’s a bad guy.”

Lucasfilm’s Carrie Beck, director of creative content strategy, thinks Oyelowo is more than convincing as Kallus. “David brings a voice that is very authoritative and very commanding and very cool,” she says, “without betraying any sense of insecurity or weakness.” As seen in the video’s concept art and animation, Kallus wears classic gray Imperial military attire along with a threatening helmet for field missions, and has distinct angled facial hair.

According to art director Kilian Plunkett, “He’s pretty literally a rebel hunter. His whole task is to investigate any sort of instance of local insurgency and see if it’s the beginnings of what could become a rebellion.” Moreover, he’s ambitious, and sees any victory over rebels as something he can use to climb the ranks of the Empire. Kallus is not in the position to command a fleet of Star Destroyers, adds executive producer Dave Filoni. Kallus is on the ground, leading stormtroopers in face-to-face battles against anti-Imperial groups — and his combat skills are impressive, including the use of a modified version of Zeb’s honor guard staff.

“I don’t know that Kallus would think that what he’s doing is really evil,” Filoni says. “He’s just doing his job for the Empire, and he believes in the Empire…So, Kallus — definitely an interesting character and one to watch out for. Especially if you’re a rebel.”

Star Wars Rebels continues the epic tradition of the legendary Star Wars saga with all-new exciting, action-packed adventures. It is a dark time in the galaxy, as the evil Galactic Empire tightens its grip of power from world to world. As the series begins, Imperial forces have occupied a remote planet, ruling with an iron fist and ruining the lives of its people. The clever and motley crew of the starship Ghost is amongst a select few who are brave enough to stand against the Empire. Together, this ragtag group will face threatening new villains, encounter colorful adversaries, embark on thrilling adventures and become heroes with the power to ignite a rebellion.

Follow @StarWars and @DisneyChannelPR for the latest news on #StarWarsRebels.

Brian Curran
A Star Wars Fan since 1977 when he was just 2. Brian grew up in California where his family would often make trips to Disneyland. In 1987 he took his first “Trip to Endor” and doesn’t pass on a chance to go back! He also enjoys going to Conventions and meeting the actors from the Star Wars films.
Read more from Brian Curran
Tags: Disney Channel, Disney XD, David Oyelowo, Agent Kallus
Loading Comments...