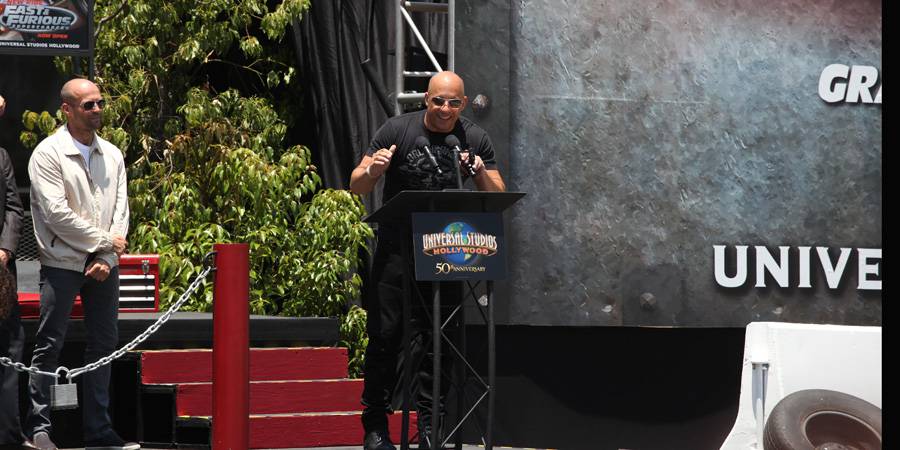 Universal Studios Hollywood is celebrating 50 years as the world’s leading movie studio and theme park, and on Tuesday afternoon celebrated the grand opening of Fast & Furious – Supercharged, a brand new ride based on the popular Fast & Furious film series. The new ride serves as a new finale to the world famous Studio Tour, which already includes King Kong 360 and an encounter with Jaws. The brand new attraction which is now open, features cast members from the films including Vin Diesel, Dwayne Johnson, Michelle Rodriguez, Tyrese Gibson and Luke Evans and gives guests the perceived speeds of racing 120 miles per hour.

The grand opening ceremony took place on Universal Studios backlot, right in Courthouse Plaza where Back to the Future was filmed. Many of the Universal Picture Cars from Furious 7 were on display to pose with and explore.

To kick off the party, Pit Crew Dancers raced onto the scene and showed us how to party Fast & Furious style.

Attending the festivities were the top brass of the studio including Ron Meyer, Vice-Chairman of NBCUniversal and Larry Kurzweil, President & COO, Universal Studios Hollywood. Larry Kurzweil raced onto the scene first, making the opening remarks, reminding everyone of the transformation the theme park has undertaken in the past several years.  Los Angeles Mayor Eric Garcetti, a proud supporter of Universal Studios also celebrated the opening of the new ride to acknowledge all the good Universal Studios has done for the city of Los Angeles and in tourism in general. In a nice sincere moment, he made sure to make a nod to the late Paul Walker as a star in the sky.  Also present were Steve Burke, CEO, NBCUniversal; Tom Williams, Chairman, Universal Parks & Resorts; Mark Woodbury, President, Universal Creative; and Chick Russell, Executive Producer, Universal Creative.

Stars from the ride, Vin Diesel, Michelle Rodriguez, Tyrese Gibson, and also in attendance was Jason Statham from Furious 7.  Vin Diesel took to the stage to honor Paul Walker and talk about the family that is Universal, revealing the production that will soon begin on Fast & Furious 8 and also spoke fondly of the making of the ride with the best team around. With that, the chain cutting was about to take place but the FBI broke things up, leading to one final car chase that launched the car (and the ride) through the Fast & Furious – Supercharged sign.

The Ride – a review

Fast & Furious – Supercharged is a 3D 360 degree attraction similar to King Kong 360. Throughout the tram, we are clued in to a suspicious vehicle owned by Dom Torreto (Vin Diesel). The FBI informs the tram that they’ve been following him for awhile but Luke Hobbs (Dwayne Johnson) interjects and reminds us the danger we’re all in. We’re asked to hide in a “secure” location, a Sullivan Truck Repair garage, which is also where street racing parties take place. Roman Pierce (Tyrese Gibson) fills us in with a few more details, inviting us into his secret spot, with the help of Letty Ortiz (Michelle Rodriguez).

The next scene makes use of the latest hologram technology, showing a rave that ends early, thanks to our pal at the FBI, but Dom, Letty, and Luke show up to give us some further instructions. What makes this part of the show works is how it breaks each tram vehicle into its own separate viewing station for the holographic projectors, making it a much more intimate experience. The illusion is pretty flawless and impressive, and hilarious thanks to Dwayne Johnson’s innuendos.

What takes place next involves the world’s longest and most expansive 360-degree screen utilizing a state-of-the-art 3D audio system and 3D-HD imagery. It spans nearly 400 feet in length to encircle the Studio Tour guests within a newly constructed 65,000 square-foot structure. This is where the entire tram gets to race down the highways along with the cast of Fast & Furious.

Overall it’s a pretty fun experience, although one would hope that they would top the King Kong experience in different ways, perhaps by constructing a dome overhead for a more convincing experience that you’re driving outdoors. Still, credit has to be given to Universal Studios Hollywood for continuing to push the envelope of what’s possible in a way that their neighbors in Anaheim cannot even attempt.  Supercharged makes the Studio Tram, which is already the best thing at the park even better.  I wouldn’t mind them making a stand alone Fast & Furious ride though. That would really be something.

David Yeh
A long time fan of both Disney and Star Wars, he has a hard time resisting the temptations of Disney’s merchandising force. If you see pictures of the toys and pins, you can bet they are from Dave, our resident collecting guru.
Read more from David Yeh
Tags: Fast & Furious, Dwayne Johnson, Vin Diesel, Michelle Rodriguez, Tyrese Gibson, Jason Statham
Loading Comments...